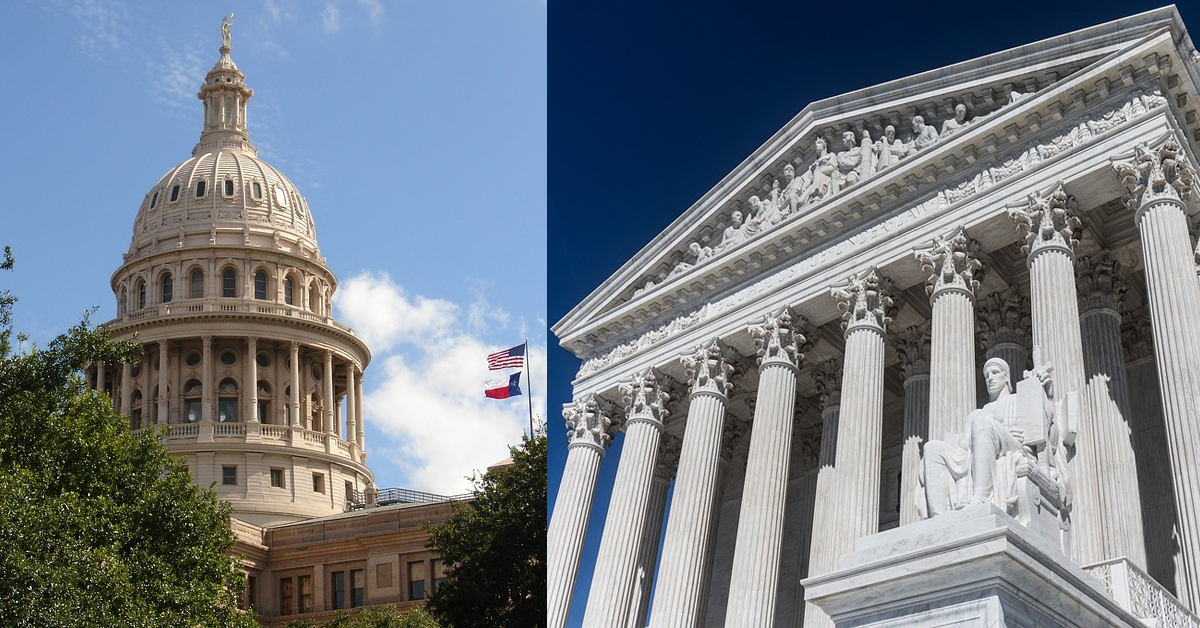 In going through my news round-up, as per usual, I came across an article from our “friends” at The Texas Observer. In an article entitled “Five New Laws that Will Likely Get Texas Sued (or Already Have),” the author outlines a few of the bills passed during the recent legislative session that are likely to be litigious.

The five mentioned are: Sanctuary Cities Ban, Fetal Remains Requirement, Partial Ban on Second-Trimester Abortions, Religious Refusal for Child Welfare Providers, Straight-Ticket Voting Ban, and Voter ID. Without going into the merits of these laws, let me just point out that most of this is just traditional conservatism that, a few decades ago, no one would have batted an eyelash at. However, I must admit that the Observer is right! These laws are likely to be challenged, if they haven’t been so already. They will not be contested because these laws represent an affront to the constitutional system as outlined by the founders. No. Certainly, to even contest some of these laws via the U.S. Constitution will require a lot of imagination and enough legal acrobatics to put Cirque du Soleil to shame. Nonetheless, they will be challenged, and many of them defeated. In preparation of this, somewhere in the federal circuit, justices are putting on leotards and thoroughly stretching out.

It is an unfortunate truth of our Union, that the Constitution is no longer the supreme law of the land. Unchecked judges and politician routinely ignore their legal limitations and instead employ the boundless expanses of their personal biases to serve as law. Under our broken system of government, you are only allowed to have laws that go in one direction: to the left. So, you can just stow your recitation of the enumerated powers of Washington, because laws and constitutional limits are only as good as the character of the ones that oversee them, and character is the other big deficit with which our Union is plagued. You’ll get exactly what our progressive oligarchs say you’ll get… and they’ll probably legislate that you like it, too!

If Texas wants a restoration of her sovereignty and a return to limited governance, she has two choices: one that is doomed to failure and the other that has a strong likelihood of success. The first is to continue throwing politicians at the problem in the futile hope that we’ll convince enough of the establishment politicians, entrenched bureaucrats, and judges with delusions of deity to give their hearts to Jesus and repent of their iniquitous authoritarianism. We’ve been trying that for decades with no real success, but hey, miracles can happen! Maybe after only a few more generations of lost rights and sovereignty, then our descendants will inherit a free Union… maybe. The second is to exercise our legal right under Article I: sections one and two of the Texas Constitution, and Amendment 10 of COTUS, declaring the U.S. in breach of contract and our independence from Washington. Then, they’ll be no level of bureaucracy to refuse us what is our right, nor un-pass our laws for us. We will preserve the values of the founders here in Texas, and let D.C. follow their own myopic foolishness to whatever end, without us.

Washington, including both parties, has chosen to go down the path that leads away from state sovereignty, individual liberty, and the Constitution. This has been the trajectory for almost 100 years, and there continues to be no evidence that anything will substantively change. Central control of everything is where this Union is headed. However, no matter what anyone might say, Texas doesn’t have an obligation to follow D.C. into this brave new world. While we have the will and the last ounce of authority to act, we had better separate. Otherwise we can look forward to telling our children and grandchildren how we used to live in a free country.

In this article:featured, Five New Laws that Will Likely Get Texas Sued (or Already Have), Ryan Thorson, Texit, The Texas Observer, TNM