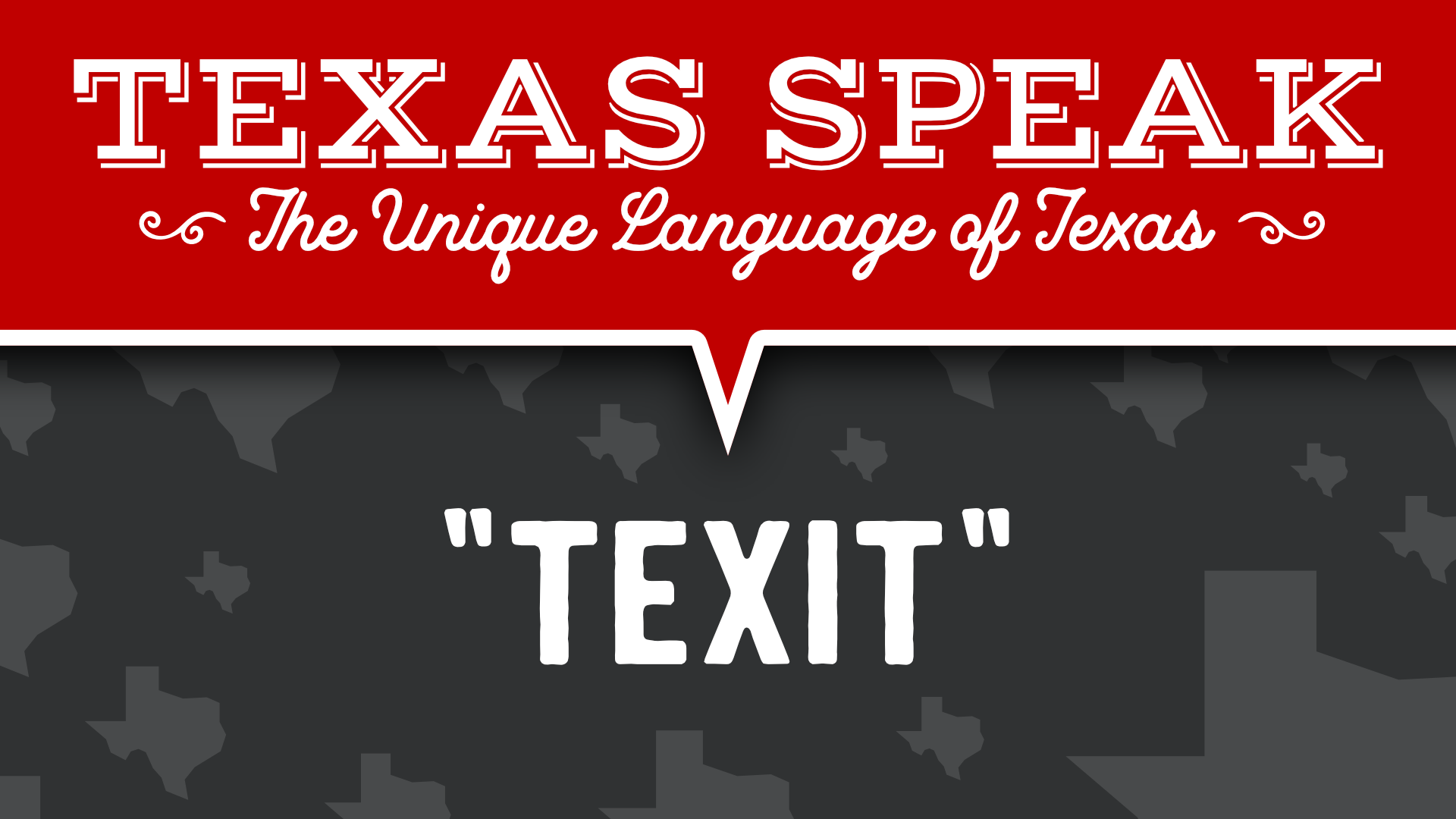 One of the words you’ll see often in the Texian Partisan is “Texit.”  It’s our unique way to describe the process of Texas reasserting its status as an independent nation.

Here at the Partisan we have some terms we prefer, and others we avoid.  When we talk about the process of Texas reasserting its independence, we use the term “Texit,” the linguistic mashup of Texas and Exit.  Think of our goal as similar to the similar term, Brexit: the peaceful exit of Great Britain from the European Union.  Texit is a process, not an event.  Think of it like leaving a concert: You may exit the arena, exit the parking lot, and exit the city before you return home.  At what point did you exit?  Leaving one place to get to another is a process of consecutive steps, just like Texit will involve multiple steps of separation and self-determination.  It is unreasonable to expect a Texit vote on a Tuesday and a fully functioning independent Republic of Texas by Friday.  The process will be long and potentially challenging, but the outcome will be worth the effort.

We intentionally avoid the term “secession,” as that word immediately brings to mind the Civil War of 1861-1865.  The secession of states during the Civil War was linked with violence, war and destruction, and with the issues of slavery and racism.  Texit is a nobler goal, the peaceful withdrawal of Texas from the United States via a public referendum followed by government-level negotiations.  Once the separation issues are resolved, we envision Texas as a constitutional republic as described in the current Texas constitution.  Anyone claiming that Texit is a call for a civil war is clearly misinformed.

Our goal is not unprecedented. Did you know that at least 17 countries became independent from Britain during the 70 year reign of Queen Elizabeth?  This occurred without argument that these countries have no authority to have an independence referendum, and the international community recognizes as independent multiple nations that were formerly ruled by the British.  Withdrawing from a political situation and becoming an independent entity has plenty of precedent on the modern international stage.

We prefer the term Federal when referring to the government in Washington DC.  We believe in limited government as described in the US Constitution, where all issues and powers not explicitly mentioned are reserved to the states.  The United States are first of all states, and we believe that the current centralization and expansion of the Federal government as the “nation” of “America” is not true to the intent of either the Texas or United States constitutions.   The central government of the United States was intended to be a limited one, not the ineffective and bloated juggernaut we currently endure. Congress fails to make laws that are adequate to the times.  The executive branch and its army of unelected bureaucrats re-define laws with little oversight.  The Supreme Court inserts itself in the middle of culture and politics under the pretense of Constitutional “interpretation.”  The dysfunction at the Federal level is pervasive and universal, not limited to any single party or elected official.

We prefer the Zavala flag as our symbol.  The Republic of Texas had several flags during its development and time as a nation.  The well-recognized Lone Star flag is indeed a fine flag, but to us represents the subservient state of Texas as a member of the United States of America.  We don’t rally to the flag of a subservient member, but to the flag of a nation.  While we respect the right of a state to secede, the history of the Confederate flag is complex and associated with strong feelings from very many different perspectives.  We therefore avoid the use of the Confederate flag, as we intend to go forward toward an independent Texas, not backward to a history of self-determination that is marred by associations with war and racism.

We have no manifesto or founding documents.  Instead we stand on the principles the United States was founded upon, even as we reject what it has become.

That the general, great and essential principles of liberty and free government may be recognized and established, we declare:

Sec. 1.  FREEDOM AND SOVEREIGNTY OF STATE.  Texas is a free and independent State, subject only to the Constitution of the United States, and the maintenance of our free institutions and the perpetuity of the Union depend upon the preservation of the right of local self-government, unimpaired to all the States.

Sec. 2.  INHERENT POLITICAL POWER; REPUBLICAN FORM OF GOVERNMENT.  All political power is inherent in the people, and all free governments are founded on their authority, and instituted for their benefit.  The faith of the people of Texas stands pledged to the preservation of a republican form of government, and, subject to this limitation only, they have at all times the inalienable right to alter, reform or abolish their government in such manner as they may think expedient.

Each of these articles carries key points with regard to Texit.  Section one declares that Texas is already free and independent, subject only to the Constitution of the United States.  It also declares that the preservation of the Union depends “on the preservation of the right of local self-government, unimpaired to all the States.”  It is our position, backed with evidence, that the right of Texas to govern itself is indeed impaired by the current Federal government of the United States of America.

That brings us to section two, which contains two points.  First, “all political power is inherent in the people.”  We advocate for a representative republican form of government, by the will of the people.  We advocate for dissolution of the bondage to the United States of America by the will of the same people, by the sovereign vote of the people of Texas. Next, the people retain “at all times the inalienable right to alter, reform or abolish their government” in such ways as are expedient.  The right to reform government is not granted, but “inalienable.”  This right goes so far as to give the people power to “abolish” the current government.  The position of the Texian Partisan is that the people of Texas are within their inalienable rights to peaceably vote to withdraw from the United States.

Sam Houston, the first President of the Republic of Texas, the leader of the Texian army at San Jacinto, when faced with battle said this:

“We view ourselves on the eve of battle. We are nerved for the contest, and must conquer or perish. It is vain to look for present aid: none is at hand. We must now act or abandon all hope! Rally to the standard, and be no longer the scoff of mercenary tongues! Be men, be free men, that your children may bless their father’s name.”

This is our call as Texian Partisans as well.  We must prevail, or perish.  We must act, with no expectation of help, in order to secure freedom for our children and our children’s children.

Houston had these things to say about the nation of Texas, which remain true to this day:

“Texas will again lift its head and stand among the nations. It ought to do so, for no country upon the globe can compare with it in natural advantages.”

“Texas has yet to learn submission to any oppression, come from what source it may.”

We find ourselves on the eve of political battle.  The Republican Party and Libertarian Party of Texas both advocate for an independence referendum in their party platform.  Independent polling shows that 66% of Texan voters want an independence vote.  The momentum is here, and the moment is now. As we enter the upcoming legislative session, only our elected representatives stand between the people and a free Texas.

For information or to join the Texas Nationalist movement, click HERE.