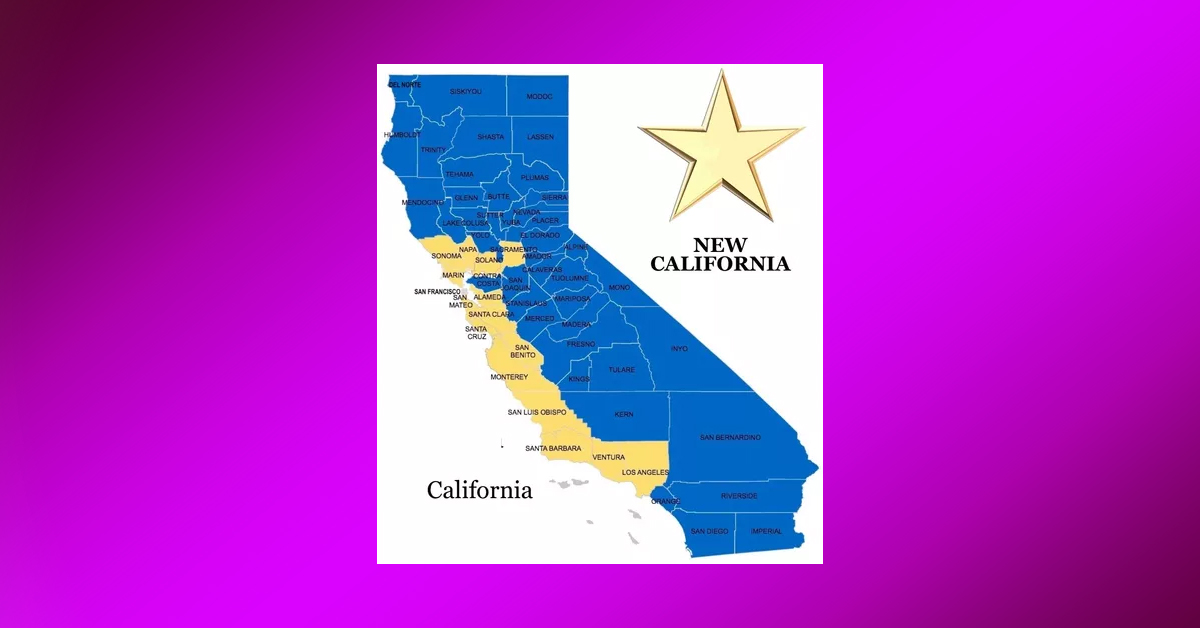 Independence in California is getting another face-lift!

From time to time, the Texian Partisan has highlighted some of the independence movements coming out of the Golden State. We’ve focused on CALEXIT , a secession initiative that saw heightened interest in the wake of the 2016 election. Additionally, we recently covered the modern State of Jefferson, a movement that wants the North to separate from the rest of the state to maintain its political/cultural uniqueness and provide it better representation. However, a new independence movement has risen from obscurity to, last week, grace the headlines of many mainstream news outlets: New California.

The brainchild of Robert Paul Preston and Tom Reed, New California is unlike the CALEXIT effort, which hearkened to a Californian (and more progressive) identity in order to form a new nation separate from the United States. Instead, this movement has goals more in line with the State of Jefferson project, wishing to be the 51st state and appealing to a more agrarian and right-wing identity that is little represented in Sacramento. “The current state of California has become governed by a tyranny,” states the movement in their on-line declaration.

Therefore the United States Declaration of Independence of 1776, the Constitution as adapted in 1783 by the Congress of the United States of America, the Alta California Declaration of Independence of 1836, the Sonoma Proclamation of 1846, and the California State Constitution of 1848 Mandate the Right, the Responsibility, the Duty of the People who are suffering the long train of abuses and usurpations at the hands of a tyrannical government to abolish and make New a Government by the People and for the People under GOD.

However, unlike the Jefferson project, the scope of the proposed new state is immense. Whereas Jefferson was limited to around 20 counties in the North, New California would encompass most of what is today California, leaving a coastal sliver of the bluest of blue counties for the old state to keep. While undertakings of this sort are always enormous and taxing, this one is particularly ambitious, to say the least!

The main difficulty with a project like this is that it’s a mother-may-I type situation. Unlike Calexit, which (if implemented) could tomorrow leave the United States under its ninth and tenth amendment COTUS powers, New California would have to first get permission from their legislature to leave. After that, they would have to apply for formal accession into the Union. However, since the legislature has seemed content to ignore the rural and up-state counties for so long, what’s to stop them from just continuing to ignore them and their declarations?

Former Clinton administration adviser, Dick Morris, has suggested (posted on the New California website) that the creation of West Virginia could serve as precedent to allow New California to overcome the obstacle of an obstinate legislature. West Virginia seceded from her mother-state without the legislature’s permission, preferring to stay in the  Union. Although the act was unconstitutional, as sovereignty is invested in the state and not in any incorporation of the state, it was nonetheless admitted into the Union via President Lincoln’s executive order. Perhaps the New California movement is hoping to curry similar favor with President Donald Trump, in lieu their legislature’s approval and despite lacking the circumstances of a war over secession.

The 51st state is a concept that continually returns to mainstream of discussion, whether that hypothetical state is upstate New York, Jefferson, or New California. Each time, the motivation is same: the people feel that they are not being properly represented by their government. Only time can tell if the counties involved in the New California effort are serious enough to make this happen, and the conditions right enough to let it stand. However, considering the legal obstacles that surround it, and the unsympathetic hands the steer the ship of that state, it will doubtless be an uphill battle.