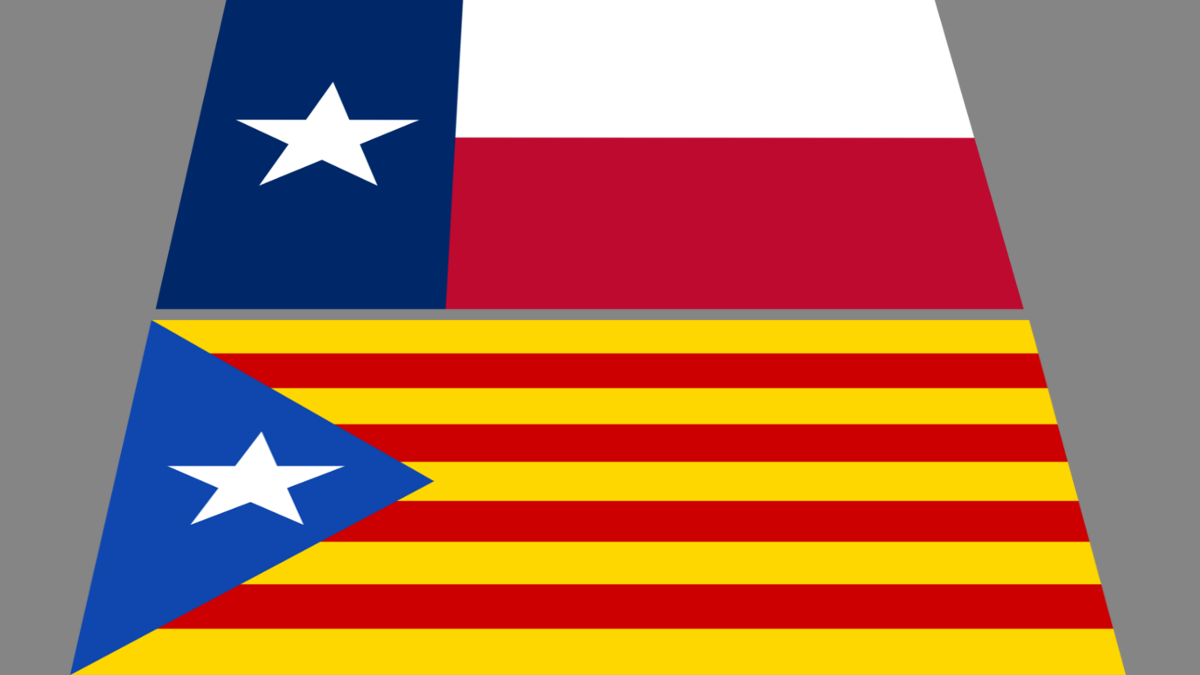 The Texas Flag and The Blue Star, the flag of Catalonia Independence, by Guillermo Romero. No endorsement.

In previous articles we covered the progress of the Catalan independence movement.[3][4][6] Last Sunday (10/1/17) the people of Catalonia went to the polls to cast their vote on independence. As members of the Texas Nationalist Movement continue to call for a similar referendum, what lessons can we learn from the Catalonians? 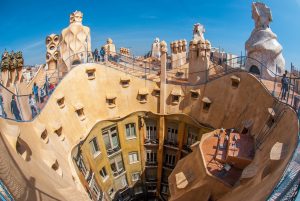 Perhaps you haven’t heard of Catalonia, but I’m sure you know Barcelona! This popular tourist destination of Spain is in Catalonia. Catalonia is one of 17 autonomous regions, like states, recognized by the Spanish national government. Catalonia is ancient, having its roots in the 12th century Principality of Catalonia.[5] With the ratification of the 1978 Spanish Constitution,[7] Catalonia became a political entity of Spain. Now the wealthiest region of Spain,[11] benefiting from both industry and tourism, its people have decided to return to their original sovereignty. 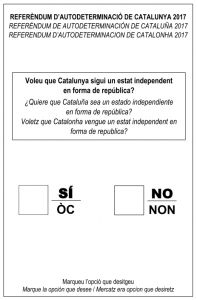 The Catalonians are pursuing the same strategy as the Texas Nationalist Movement: (1) garner public support, (2) hold an independence referendum.[14] Public support for independence has been building for decades because Catalonia, with a unique language, culture and history,[2] desires greater local control. They held their first referendum in 2014, with 81% of voters supporting independence. Last Sunday’s referendum yielded 92% in favor of complete autonomy. However, these two elections present a clear contrast and a lesson for us.

Although in both elections, over two million ballots were cast in defiance of the Spanish government, the difference this year is that Spanish law enforcement forcibly prevented voters from entering polling places.[2][17] According to Laura Williams’ article “Catalonia Shows the Danger of Disarming Civilians,”[2]

Likewise, in another article authored by Grayson Quay, “Catalonia’s Secession Attempt Offers Lessons For Texas and California,”[1] he wrote:

While Williams correctly identifies why Spanish law enforcement was able to violently confront peaceful voters—“firearm ownership is not a protected individual right”—Quay justifies their action by pointing to the Spanish Constitution’s “indissoluble unity of the Spanish Nation” clause. He further dismisses the Texas and California self-determination operations as “abortive secession movements,” claiming:

Such a situation [Catalonia independence] seems unimaginable in the United States, but we have had a few abortive secession movements of our own with the Texit and Calexit movements of recent years, not to mention the American Civil War, which set the precedent on the issue of American secession. Responding to a 2013 “We the People” petition for Texan secession, a White House official echoed the Supreme Court’s 1869 Texas v. White decision, writing that America is a “perpetual union” that the Founding Fathers “did not provide a way to walk away from.”

America’s federal government, then, has the same legal rights as Spain’s to suppress any attempt at secession. Imagine National Guardsmen, shipped in from 49 other states, occupying schools, churches, and fire halls in Texas and California, brutally beating and gassing any who try to vote, while local and state police find themselves caught in the middle. It could happen here.

Allow me to broaden Quay’s horizons by dismantling his prevarications.

To begin with, although Quay may be unable to imagine a successful 21st century American political severance, it has started. The conservative/progressive and grassroots/establishment divisions in this country were no better illustrated than by last November’s presidential election. In some states like Texas, the patience of conservatives with the establishment running Washington is wearing thin.

Next, the #TEXIT movement is not “abortive.” It has not ceased. It is progressing. The Texas Nationalist Movement alone has 25 years of progress. Nearly 350,000 support a Texas independence referendum.[14]

Then, we have Quay’s “civil war.” What Quay refers to as the “American Civil War” is referred to by Texans as the “War Between the States,” or in some contexts “The War of Northern Aggression.” It was not civil. It was not about slavery. And, it certainly did not settle the issue of American secession.

Regarding the 2013 “We the People” White House petition,[8] where to begin? Texans will not ask Washington for permission to leave the Union. Recognizing that freedom must be seized, Texans will peacefully seize their political freedom when they believe Washington has seized the last straw of their individual freedom. There is a “Line in the Sand.”[13]

With respect to the Supreme Court’s 1869 Texas v. White decision[15], this has been meticulously dissected by both apologists[16] and antagonists[9][12]. The examination by the latter begins with the observation that the Supreme Court was not granted constitutional authority to determine what is and is not constitutional. It unlawfully gave itself that power in 1803 in the Marbury v. Madison case, but in actuality it is retained by the states and the people. Even if the decision itself was lawful, it is flawed. While the court wrote that Texas “entered into an indissoluble relation” with the United States, it provided no evidence for that assertion. Moreover, two years after the decision President Grant signed an act entitling Texas to U.S. Congressional representation, re-admitting Texas into the Union.[12] Did Texas leave the union or did it not?

Finally, Quay attempts to conjure up in our imagination National Guardsmen violently preventing Texans from voting. He conveniently forgets the crucial difference between Catalonia and Texas, clearly identified by Laura Williams: Texans are armed. We wrote the Second Amendment to remind Washington of that. That is a substantial deterrent to tyranny.

In order to effect a peaceful severing of political ties with the United States, there must be widespread Texas support for independence. That support should be demonstrated through a fair and open referendum. We at the Texas Nationalist Movement see public support for a return to our independent roots growing each year. The GOP delegates at the 2016 Texas Republican Convention narrowly defeated a platform plank calling for a state referendum on independence.[10] However, to continue this process we must protect our God-given rights to life, liberty and property. Our right to life necessarily implies our right to defend our life. To defend our life in the 21st century from an oppressor—whether an individual or government—we must be able own and carry firearms. This means we must defend the Second Amendment from all enemies of freedom, at all times, while we pursue the independence of our beloved Republic of Texas.