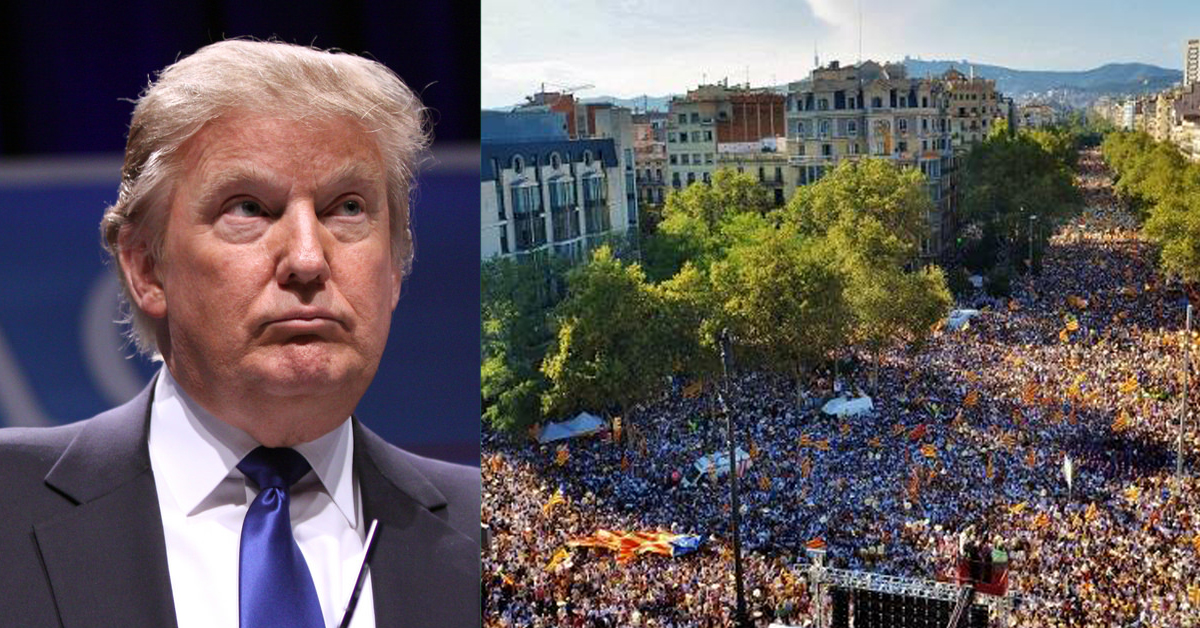 Hot on the heels of denying support for the self-rule of the Kurds, President Donald Trump, in a reversal for this White House, has come out against the peaceful and democratic independence efforts of Catalan.

Donald Trump, who has been known as a supporter for the right of self-determination, has changed from his position on the Catalonian effort from one of non-interference, to that of opposition. “‘I think Spain is a great country, and it should remain united,'” said Trump. Trump also went so far as to label Catalan’s independence efforts as ‘”foolish.'” His comments were made during a press conference with visiting Spanish Prime Minister, Mariano Rajoy.

Recently, the E.U., afraid of balkanization of Europe, warned that an independent Catalan wouldn’t be allowed to join the European Union. While it’s easily taken for granted that globalists would be against Catalonian independence, Trump following suit is a surprise. Not so long ago, there was a time when Trump was branding himself as Mr. Brexit, intimating that the success of the U.K.’s independence referendum was a good omen for his future election, and that both were supposed to mark a new era of taking back power from globalists and giving it back to the people. Even his recent speech to the U.N. was heralded as a “An Ode to Self-Determination.” But why do an immediate about-face on what is arguably the Trump administration’s greatest ideological asset?

Some may link this reversal on self-determination to the fact that Trump has rid himself of much of his right-leaning advisers. Trump has fired or lost to resignation many of his conservative counselors and cabinet, with the much-maligned Sessions being one of the last major conservative hold-outs. Trump now seems entirely surrounded by Democrat advisers, including members of his own family. And while this could explain much of the back-peddling that Trump has done recently on issues such as DACA, the debt-ceiling increase, or climate-change, can it explain this? Even Senate Minority Leader Chuck Schumer (D) came out for the self-determination of the Kurds, in another missed Liberty opportunity for the Trump administration. And Schumer could hardly be considered an anti-globalist or right-leaning.

I think the likely explanation for this apparent fickleness is that Donald Trump has no real ideological center; his working philosophy of governance is effectively, “I want things when I want them.” We might wish he had rock-solid loyalty to the Constitution, limited government, individual Liberty, or self-determination, but it doesn’t appear to be the case. That’s not say that he’s against those things, at least not all the time, but those principles don’t animate him. He’s impulsive, living in the now, saying what occurs to himself in the moment. And that which Trump wants is motivated by what he believes will bring him the most popularity, and not by his belief in its rightness. As a kitten chasing the projection of a laser-pointer, Trump’s target of admiration is an ever moving one; darting left, right, and left again. And like King Lear, Trump has rewards for which side best professes love for him, but little else will move him.

While it’s a shame that the President decided to go back on what might be his one consistent position, especially when a word of encouragement from the U.S. would have been useful to helping Catalan, ultimately, it’s not up to him. This is a decision for the Catalonian people. Trump or no Trump, in defiance of Spanish tyranny, the referendum is on.