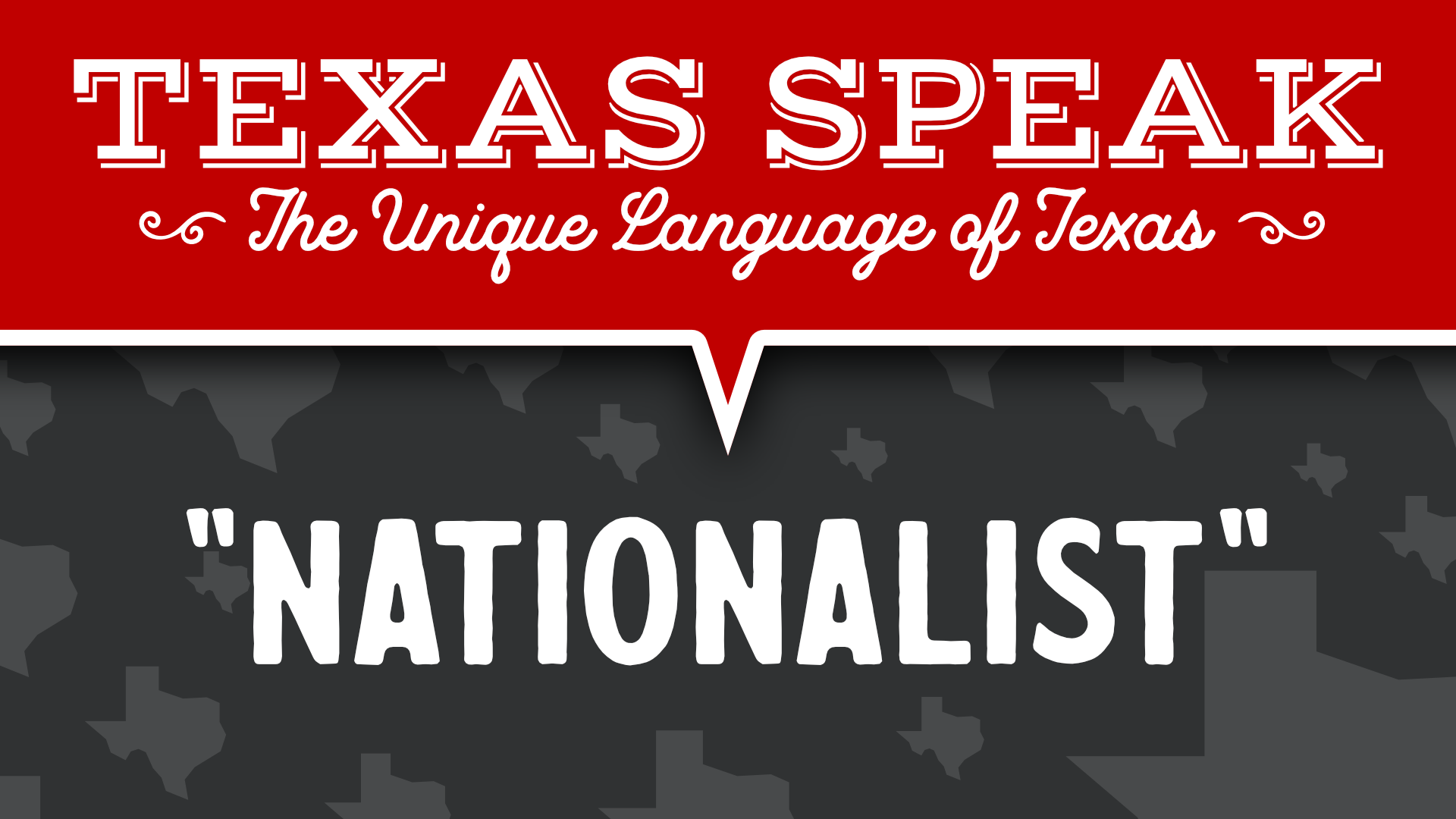 The media and the left in particular talk about “nationalism” with contempt, as if it were some kind of subset of “racism” or “facism.”  Like many things in the mainstream media, that’s just not true.  The Texian Partisan breaks down the word “Nationalism” from the perspective of the Texas Nationalist Movement.

Once upon a time, words like “patriotism” and “nationalism” used to be held in high regard.  To be a patriot or a nationalist was to have devotion or enthusiasm for one’s country.  Historians consider nationalism to be a relatively modern phenomenon made possible by the industrial revolution and the rise of both democracy and anti-colonialism.  Both the American and French revolutions are early historical examples of nationalist sentiment.

So, first things first, to consider ourselves part of a “nation” of “America” or a “nation” like “France” as opposed to part of England or some other country is itself the historical root of the idea of nationalism.

If you look up the word, the definition is likely to be slanted one way or the other by the editor’s socio-political views. Brittanica defines nationalism as “ideology based on the premise that the individual’s loyalty and devotion to the nation-state surpass other individual or group interests.”  That one’s fairly objective.  The very first lines of tech giant Google’s search on the other hand have a (not surprisingly) negative spin on the term: “a person who strongly identifies with their own nation and vigorously supports its interests, especially to the exclusion or detriment of the interests of other nations.”  Of all the possibilities, Google starts with “exclusion” and “detriment.”  Wikipedia has a comprehensive and balanced article that traces nationalism through history.  Another example of anti-nationalism bias comes from Dictionary.com, which argues that patriotism and nationalism “were used roughly in the same way” historically, but now patriotism “has a much more positive connotation.”  The word patriotism is a noun that means “devoted love, support, and defense of one’s country; national loyalty.” whereas “in most contexts today” nationalism is “the policy or doctrine of asserting the interests of one’s own nation viewed as separate from the interests of other nations or the common interests of all nations.” In short, nationalism is framed as a kind of excessive, aggressive patriotism.

Nationalism generally has a negative connotation. It’s used for political ideologies and movements that a more* extreme and exclusionary love of one’s country—at the expense of foreigners, immigrants, and even people in a country who aren’t believed to belong in some way, often racial and religious grounds.

*The grammar error is original to the Dictionary article.

As Texas nationalists, we are up against propaganda designed to make us sound extreme, and that’s 100% “fake news.”

Let me choose a provocative and hyperbolic metaphor from the popular narrative of the left.  In today’s culture, when someone says “I identify as”, that identity takes precedence over whatever other facts may also be true.  In that scenario, imagine if I were faced with public ridicule, “yeah well, I identify as a turkey sandwich” or with blunt disregard, “yeah well, check what’s in your pants or on your birth certificate”, or even with the combination of sympathy and sarcasm, “well bless your heart.”  People who support this kind of ideology will say that anything but full affirmation of one’s chosen identity is an insult to humanity and deserves the full weight of cultural disdain, even perhaps legal punishment.

In the spirit of that metaphor, when I say I am a “Texan” even though I was born “American”, it’s a parallel scenario.  Texas is in America, and I WAS born an American.  And yet, in my soul, to my core, in every way that is important to me, I am a Texan.  Every time some journalist says “yeah, but you can’t be an independent Texan,” or throws out “check the Civil War” or “Texas vs. White”, or even says “well bless your heart,” I am insulted to the core.  My identity and self concept are attacked and belittled.  To say “You’re not a Texan, you’re an American” is as offensive as “dead-naming” or denying someone their identity.

So what’s the solution to this dilemma, if I believe in something you think is impossible, or if you think I’m somehow either mistaken or crazy?  I think the solution is pretty simple: don’t be an asshole. I don’t belittle you, or your beliefs or identity, and you treat me the same way.  Our existing opinions on the matter don’t have to influence our overt behavior in negative ways. Let’s have a discussion and examine why it is that we believe the way we do.  Pretty good odds that neither one of us is crazy.

Now that it’s understood what it means to me to be a Texan, let’s be kind to each other and have a discussion about nationalism.

We are called the “Texas Nationalist Movement.” Those first two words were chosen carefully to describe us exactly.  Are we Christian nationalists?  White nationalists?  Socialist nationalists?  Fascist nationalists?  No, we are not, and we’ve been saying this consistently for a long time.  Here are some words from the linked article published in 2017 that remain true today. They were my words then, and they’re my words now.

When I say I’m a Texas nationalist, I mean that I am patriotically loyal to Texas first, even above loyalty to the USA. That doesn’t make me an extremist, a racist, or a traitor. I’m proud of Texas’ independent spirit, culture, history, and people. This is our “national consciousness,” and the Texas nation is made up of people of many different races and national backgrounds.

Above all, when I say I’m a Texas nationalist, I mean that I advocate for the political, economic, and cultural independence of Texas. I believe that Texas has the resources to stand on its own as an independent nation, and that we would be better off without the crushing debt, bureaucratic machinery, and endless wars of Washington. The U.S. government long ago gave up being for the people and instead, the bloated bureaucracy takes great pains to first preserve and expand itself, next to expand the power and funds of the elites, and lastly to diminish the influence and liberty of regular U.S. citizens. I believe Texans are the best people to govern Texas, and that makes me a Texas nationalist.

Texas nationalism is not hatred. Texas nationalism is not bigotry. We want Texans of all races, creeds, and political backgrounds to unite together in self-determination. We want the opportunity to govern ourselves as a nation, by participating in the existing political processes. We are not armed and dangerous, we are voters. We are not extremists, we are your neighbors.  We are not alt-right, we are a broad coalition of hundreds of thousands of Texas residents who just want Texas to be free to choose her own destiny.

In this article:featured, Texas Nationalism