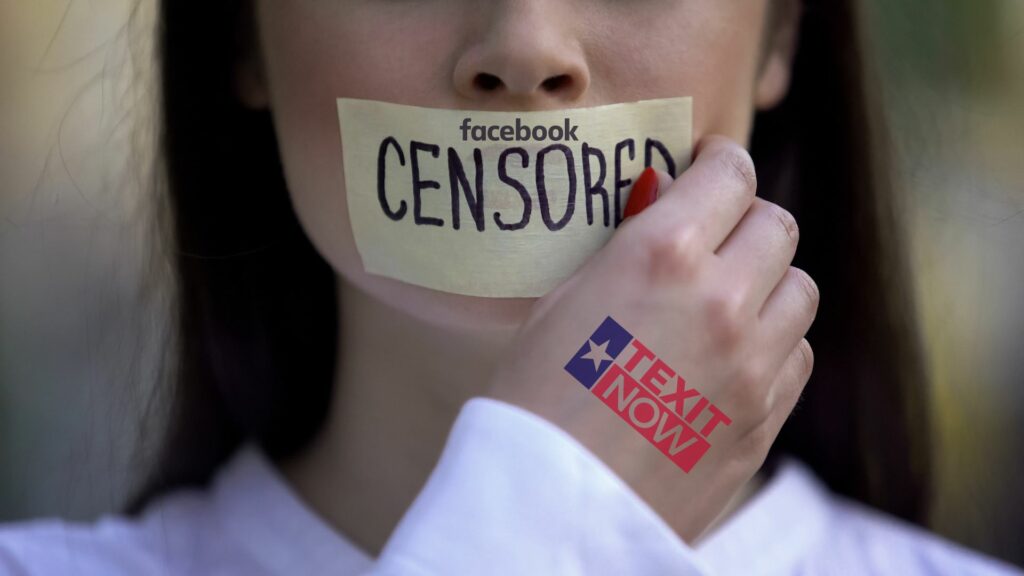 There is an ongoing lawsuit between the Texas Nationalist Movement and Meta, the parent company of Facebook, after Facebook blocked all TNM associated links.  In a recent court filing, Meta not only proved their ignorance, they opened the door wide open for the cause of Texit.

When Facebook blocked our links, we weren’t surprised.  When the Twitter files dropped showing collusion between the Federal government and Twitter to suppress views, we assumed Facebook has a similar program.  When we sued under Texas law and Meta sought to move the suit to Federal court, presumably for friendlier terms, we were not shaken.  When we saw Meta’s latest motion in the suit, however, we were a bit shocked: how could they be so stupid?

The mission of the TNM is to “secure and protect the political, cultural and economic independence of the nation of Texas and to restore and protect a constitutional Republic and the inherent rights of the people of Texas.”  While there is more to the TNM than the Texit movement, securing and winning a referendum on Texas independence is our most important and urgent goal.

The causes that compel us are clear: unsustainable Federal debt, unreasonably burdensome bureaucracy and regulation, failure to secure the border, failure to secure elections, and many more.  We actively promote the idea that the USA is past its’ prime, that it has become a hindrance to the people of Texas.  We actively promote the idea that Texas should again be an independent country.

Our strategy for Texit is clear.  Consistent with the will of the people of Texas, the legislature will pass a law authorizing a referendum.  The people will vote, and if the people vote to leave, the process of exit negotiations will begin.  This strategy is clearly outlined in the bill filed in 2021, and we are working toward filing a bill with the same strategy in the upcoming legislative session.

In their recent filing, Meta said, “Plaintiffs wish to compel an out-of-state service provider to disseminate content promoting secession from the union.”  They are correct up to this point, but they continue. “In an ordinary case, the court could simply reject this law-defying request by dismissing the Plaintiff’s petition.” To Meta (and their California lawyers), our goals are “law-defying,” which means “illegal.”

I’ll let the courts tear apart Meta’s argument from a legal perspective, and I’ll give you the logical and reasonable response:  If our content were “law-defying,” would we still be openly producing it after 18 years?  If our position were law-defying, would we have statewide office holders pledged to secure Texas independence?  If Texit were illegal, would we have filed a bill in the legislature to make it happen?  Would the Republican Party of Texas include it in the platform?

Meta could have taken several approaches, but by choosing to frame our efforts as illegal, we get the chance to litigate our legality in Federal court.

Let me give you an advance look at what they’re likely to argue, because it’s well-trodden ground, and we’re prepared.

There is no constitutional basis for declaring secession illegal.  In the US constitution, we find the following:

Since leaving the union is not mentioned AT ALL in the constitution, it cannot be “delegated to the United States” nor “prohibited,” and is therefore “reserved to the states, or to the people.”  For something to be “illegal,” there must be a law against it.  There is no such law in the United States Constitution.

In the Texas constitution, the language is different, but the principle is the same.

Article 1 Section 2: All political power is inherent in the people, and all free governments are founded on their authority, and instituted for their benefit. The faith of the people of Texas stands pledged to the preservation of a republican form of government, and, subject to this limitation only, they have at all times the inalienable right to alter, reform or abolish their government in such manner as they may think expedient.

While the word “secede” isn’t in the Texas constitution either, the language is clear that the people may “alter, reform, or abolish” our government however we think expedient.

The only legal argument against secession comes from the 1869 Supreme Court case of Texas vs. White.  This easily-debunked political statement from the post-Civil War court is the first thing that people mention immediately after they google “is secession legal?”

Texas vs. White is easily dismissed with reason and logic and a basic understanding of law.  For an authoritative example, watch this video by constitutional law professor Dr. Matt Qvortrup, who happens to be an independence expert.

The next most popular “but google says” argument is “but we already fought a Civil War over that, and you lost.”  This is the rule-by-force argument.  Last time anyone tried to leave, that effort was overcome by force, and so now no one may leave.  Is a union maintained by the coercive threat of force really a union?  If spouses remain married only because he says he’ll beat her up if she tries to leave, regardless of his infidelity, is that a good marriage?  If it’s not ok to beat your spouse to make them stay (it’s not, it’s illegal), then it’s not OK to threaten “Civil War” every time the idea of Texas independence is mentioned.  “I’ll beat you up” isn’t a legal argument.

Meta could have taken several approaches to our lawsuit, but what they chose was to open the door for the court to examine if secession itself is legal or illegal. We get to litigate the issue in open court!  Texas vs. White will get the trash-bin treatment it deserves.  The Texas and US constitutional arguments will get a public forum.  Is there a chance the court will treat us dishonestly, or that somehow the same Federal system who suppresses alternative views on social media won’t find a way to dodge responsibility?  Of course there is.  But look at it this way:

Meta doesn’t get to decide if our self-determination, our voting, or our vision for sovereignty is legal or not.  If we win this lawsuit, we will have proven in court that secession is legal, since their argument for suppressing our links is that our content is “illegal.”  If we make our case to the public and win, the people of Texas win as well.

If we make our case to the public and the Federal court decides that Meta’s argument is legitimate, then we can add that to the list of sketchy Federal stuff that justifies our exit from the union.  Either way, the cause is advanced.  Thank you, foolish lawyers at Meta, for opening the door wide open.

In this article:Facebook, lawsuit, meta, Texit