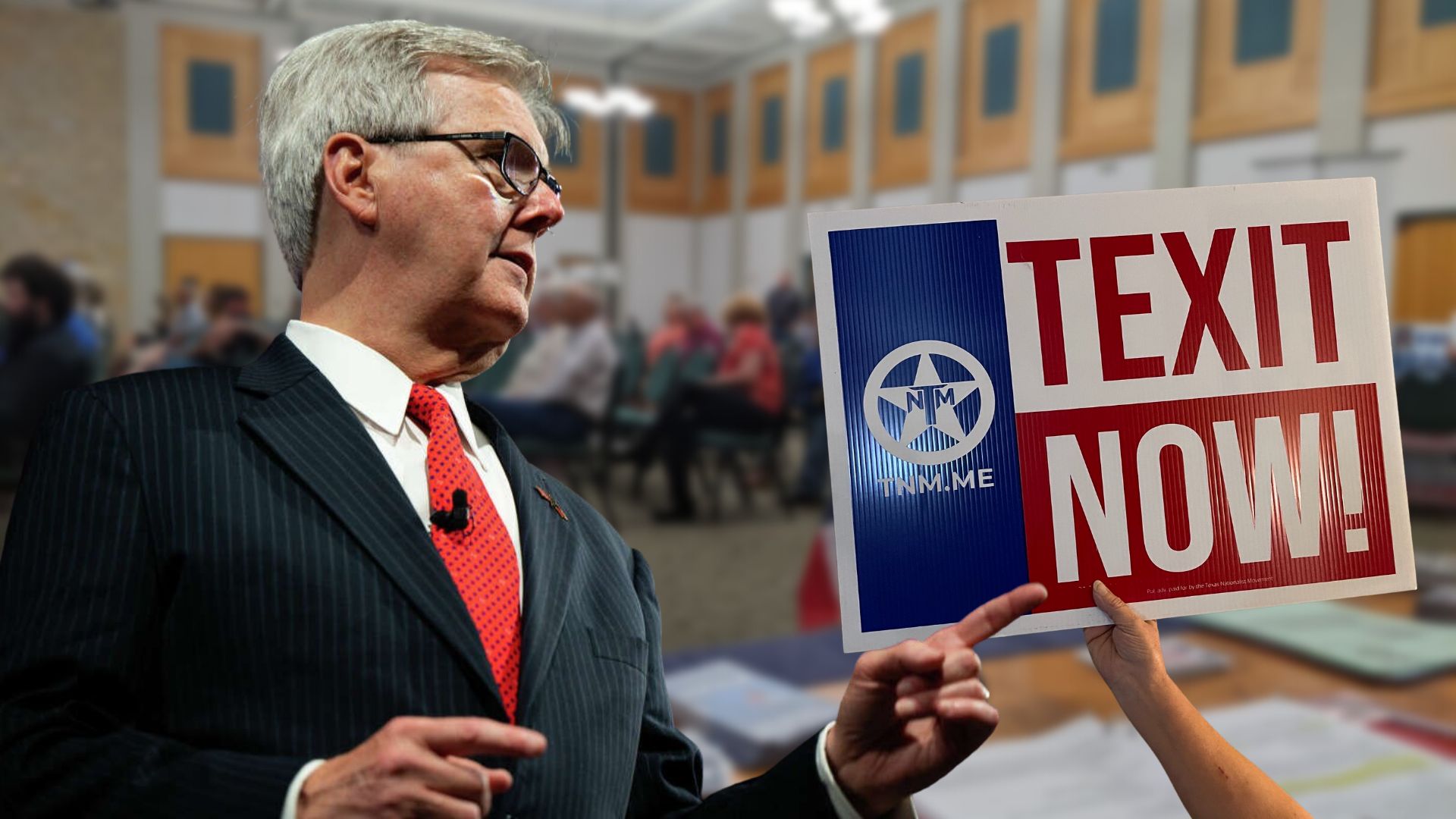 Dan Patrick has been on a tour campaigning for Lieutenant Governor throughout Texas.  A Texan put him on the spot about his support for an independence referendum, consistent with the RPT platform.  His answer was a pure political deflection.

Republican Lt. Governor Dan Patrick is again running for re-election against Democrat Mike Collier.  While on tour, a group of Texit supporters showed up at his event in Wise County.  Even though the RPT platform includes two planks (#33 and #225) in support of an independence referendum, when asked about the possibility of a Texit vote, Patrick’s answer surprised the audience.

When asked, “Is the legislature going to let us have a vote on Texas secession?” his answer was:

“That’s not gonna happen, I don’t think, for a couple of reasons.  I don’t know what the future of America is… but so many people like yourself have served and died for this country, I want to preserve our nation.  I just want to win it back.”

Let’s break that down a bit.  First, he flat denied the possibility of following the party platform, of allowing the people of Texas to vote on the issue.  He seems to think he knows better than the people what the future of Texas should be while at the same time leaving him political wiggle room by adding that little “I don’t think.”  We need to make him think.  Politicians are famous for jumping on the bandwagon.

Second, he challenged a pro-Texit veteran as if somehow he had a better understanding of what it means to serve, even though he himself is not a veteran.  Who’s more confused about service?  A person who never served, or a veteran who’s been there, done that, and decided that the United States of America as a political and economic institution has moved beyond what they fought for?

Next, he clearly seems to value “America” as “our nation” above his duty to Texas, our true nation-state. He wants to “win back” America through the same political process that got us all in this mess in the first place.  That doesn’t seem like a winning strategy. Further, the Lt. Governor of Texas ought to first be concerned about Texas, don’t you think?  As the leader of the Texas Senate, as the number two elected official in the state, why is he concerned about America first?

He followed that with a nice quip, “Now I will tell you that when I found out California had a secession movement as well, I chipped in 10 bucks.”  Of course, everyone laughed because that was a slick turn of phrase.  It’s low-hanging fruit to pitch anti-California to a group of Texans, but it is also a political deflection, a way to avoid the substance of the Texit argument by making a joke.  The Partisan reached out to the leadership of the CalExit movement to check their records for his donation. Watch their reaction in the video below.

Don’t miss the silver lining in the skilled joke pivot: He has no actual argument, plan, or strategy when he comes to Texit.  If he had talking points, he’d have said them.  He has nothing but a quick rip at California.  Patrick didn’t say he was “against” Texit so much as he revealed that he simply hasn’t thought about it.  Let’s make him think about it!

Do you know what else he didn’t say?  That California or any other state “can’t leave.”  He made no legal or political argument while using an example that suited the sentiment of the crowd.

I don’t know which part of this exchange is the most troubling.  Is it that Patrick directly refused to support the stated position of his political party?  Is it that he has already decided to ignore the people as a political force, deciding instead what issues will and won’t be addressed months before bills are even filed, or the legislative session is called to order?  Does he really know better than the 66% of voters who support a Texit vote?  Is it that he values America over Texas?  He’s a Texas elected official with no more political responsibility to “America” than any other voter has.

We are stuck with Dan Patrick as a candidate and will likely be stuck with him for another term as Lieutenant Governor.  Patrick showed his true colors that he hasn’t given Texit due consideration yet.  He has no plan to deal with us.  He’s clearly an experienced politician and, therefore, can be led to address issues by the will of the people.  Pro-Texit activism can move Dan Patrick.  Pro-Texit momentum can move Dan Patrick.  Let’s work together to make the wrong guy do the right thing for Texas.