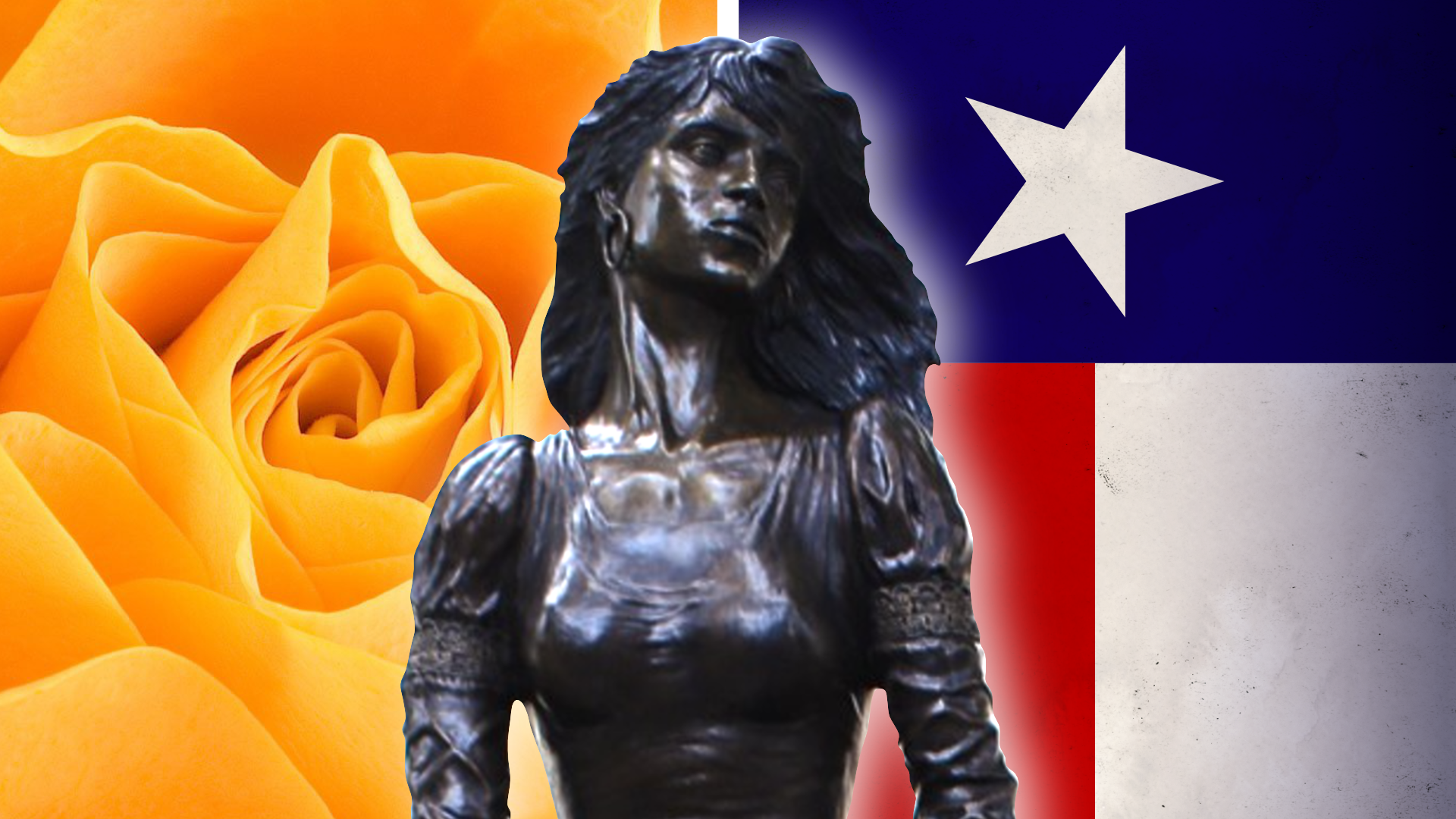 If you’ve been in Texas long, you know the ‘Yellow Rose of Texas” song. But what’s that, a flower? The phrase refers to a woman whose role in the Texas revolution is worth remembering.

On September 8, the Alamo unveiled the latest addition to its Statues of Heroes, nestled within Alamo Plaza: a bronze rendering of Emily West Morgan—also known as “The Yellow Rose of Texas”—by sculptor Eddie Dixon. According to Republic of Texas history and folklore, Emily Morgan is credited with sending word of President General Antonio López de Santa Anna’s whereabouts to General Sam Houston, entertaining the Mexican general and distracting him to the point that the Texian troops were able to sweep in at San Jacinto and defeat the Mexican army.

Springtime in 1836 was a simultaneously grim yet revered period in Texas history. The Alamo Mission near San Antonio de Béxar had fallen on March 6; the garrison at Goliad was massacred on March 27; and the newly created Republic of Texas army, commanded by Houston, remained on the move. But on April 21, that volunteer army of Texians, heavily outnumbered by Santa Anna’s seasoned troops, staged a surprise assault on the Mexicans and routed them at the Battle of San Jacinto. Texas had won its independence from Mexico.

Since the time of the Battle of San Jacinto, historians have asked: Why did Santa Anna choose to encamp on these particular Texas plains, with the Texian Army in front of him and a bayou behind him, blocking his retreat? The Mexican general knew Houston’s troops were less than one mile away; yet during siesta time on April 21, 1836, Santa Anna and his troops were caught off guard, enabling the Texians to mount a successful attack against the Mexican camp.

The alleged reason for the Mexicans’ slow response to the Texans’ charge:  Santa Anna was otherwise occupied and entertained in his tent by Emily West, a twenty-year old black indentured servant who, on April 16, 1836, had been captured (along with other members of her household) by the Mexican forces. She was indentured to Colonel James Morgan, hence her more widely known name, Emily Morgan.

The Emily Morgan Hotel—located in San Antonio’s historic Alamo Plaza—states on its website:

Though there is no official account of a woman in Santa Anna’s tent at the time, a journal entry written in 1842 by British traveler William Bollaert planted the seeds of Emily’s legend: “The Battle of San Jacinto was probably lost to the Mexicans, owing to the influence of a mulatto girl belonging to Colonel Morgan, who was closeted in the tent with General Santana (sic), at the time cry was made, ‘The enemy! They come! They Come!’ She delayed Santana so long that order could not be restored readily again.”

The Battle of San Jacinto was over in eighteen minutes. Santa Anna slipped away (half-dressed, it is oft-said), clutching a box of chocolates. He was discovered the next day, ingloriously cloaked as a private in his own army.

In the book, Women and the Texas Revolution, editor Mary L. Scheer and chapter author Jeffrey D. Dunn explain: No one has ever been able to officially authenticate the legend; yet no eyewitness accounts of the battle have surfaced to confirm or refute the story. Intriguing clues suggest [the tale] was not merely a figment of someone’s imagination.

A tribute to the Fortuitous Heroine of Texas independence

Little is known about Emily’s life following the Texas Revolution. Several disputes developed over her status as a “free black” (her legal papers were lost when she was captured by the Mexicans). But for her part, Emily Morgan is thought to have applied for and received a passport to return home to New York in 1837. Her legend continues and is celebrated today, as it is commonly held she was the inspiration for the song, “The Yellow Rose of Texas,” written shortly after the war.

The Texas Nationalist Movement (TNM) believes it is important to not only remember the legacy of those who fought and died for Texas independence, but that their legacy be properly memorialized and honored. This includes respecting the role of marginalized and minority contributors to the independence effort.

Since 2012, on the second Saturday of each month, members of the TNM gather in San Antonio to memorialize the defenders of the Alamo by silently marching and placing a wreath on its grounds. Now there’s another hero’s statue nearby to reflect on: Emily Morgan, the Yellow Rose of Texas.

In this article:Alamo, Emily Morgan, featured, Yellow Rose of Texas