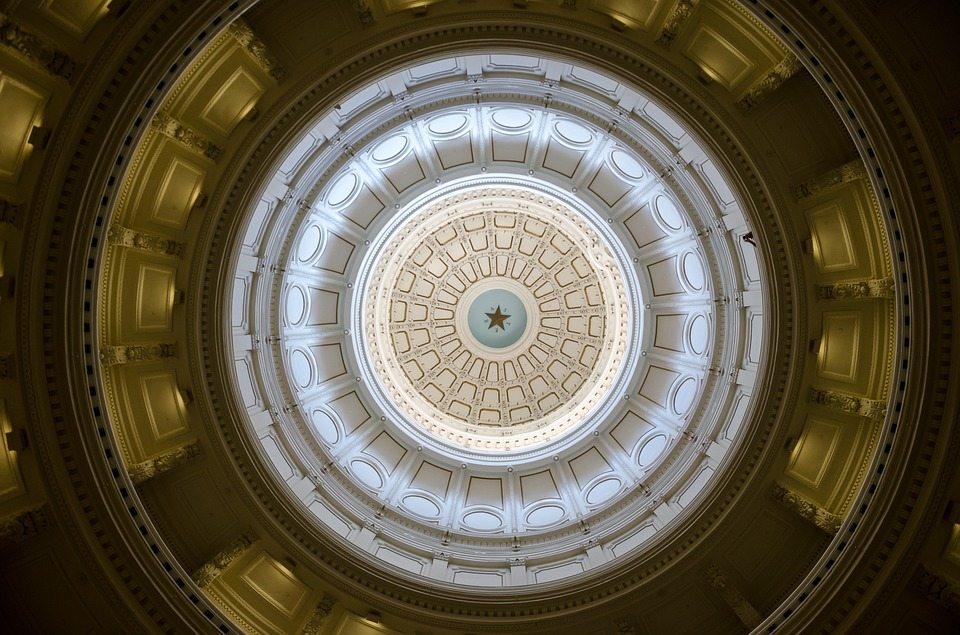 Inside the dome of capitol building in Austin.

The Texas Nationalist Movement has made a few legislative endorsements for the current session, throwing their weight behind a few bills that are in line with the goals and spirit of the organization.

The first one we’ll discuss, and TNM’s second endorsement, is HB 206. This bill, if passed, would make members of the Texas State Guard equally eligible for Veterans Land Board benefits as other Texas veterans.

According to Bob Mickler of the Texas Veterans Land Board, currently, only veterans living in Texas who have served at least 90 active duty days with US Military forces, and have a discharge that is “north of honorable,” qualify for the benefits that the board offers. Such benefits include land and home loans, retirement facilities, and burial needs. HB 206 would modify this definition to include someone who has put in a minimum of 15 years of service (reserve or active) in the Texas State Guard, as long as they meet the Board’s residency requirements.

In his endorsement, TNM President Daniel Miller commented, “This piece of legislation corrects a serious wrong in the current statute where service by members of the Texas Military Forces is treated unequally.” For those who have served, or have friends and family in the Texas State Guard, the passage of this bill will be a welcome change that brings credit upon the State of Texas.

The first Bill endorsed by TNM this year is HB 1911. The goal of this bill, according to Terry Holcomb of Texas Carry, is to “bring handgun carry in line with long gun carry and restore Texas Citizens right to carry a handgun without a license.” To read a list of specifics of the bill, and Terry Holcomb’s statement, click on the link.

In addition to receiving TNM’s endorsement, HB 1911 is also supported by such trusted organizations as the NRA, Texas State Rifle Association, and (of course) Texas Carry.

Speaking on HB 1911, Daniel Miller wrote the following: “Texas Carry and others, have been on the forefront of the fight to fully restore the right to keep and bear arms for Texans. Partnering with State Representative James White and getting House Bill 1911 filed is a major step in the right direction.” The trust and confidence placed in those working to get this bill made law is justified and well earned. HB 1911 remains the best chance for expanding the gun rights of Texans.

It’s important to note that this bill has a bit of controversy surrounding it, primarily concerning its viewed rival, HB 375. “While both bills have their good points, through the normal kind of negotiation that happens in a legislative session, HB 1911 and HB 375 are now on par with one another,” Said Miller. “According to CJ Grisham from Open Carry Texas, any differences are minor. It is likely that any further sticking points will be cleared up before the final version of the bill goes out. Our endorsement of 1911 does not mean that we oppose 375. We support any and all bills that restore fundamental rights to the people and remove impediments to the enjoyment of those rights.” he continued.

CJ Grisham is President of Open Carry Texas, and you can read some his comments on HB 1911 here. The bill is, as of writing this, in a hearing at the capitol.

The Texas Nationalist Movement is encouraging their supporters to contact their legislators and let them know that you support the passage of these bills.