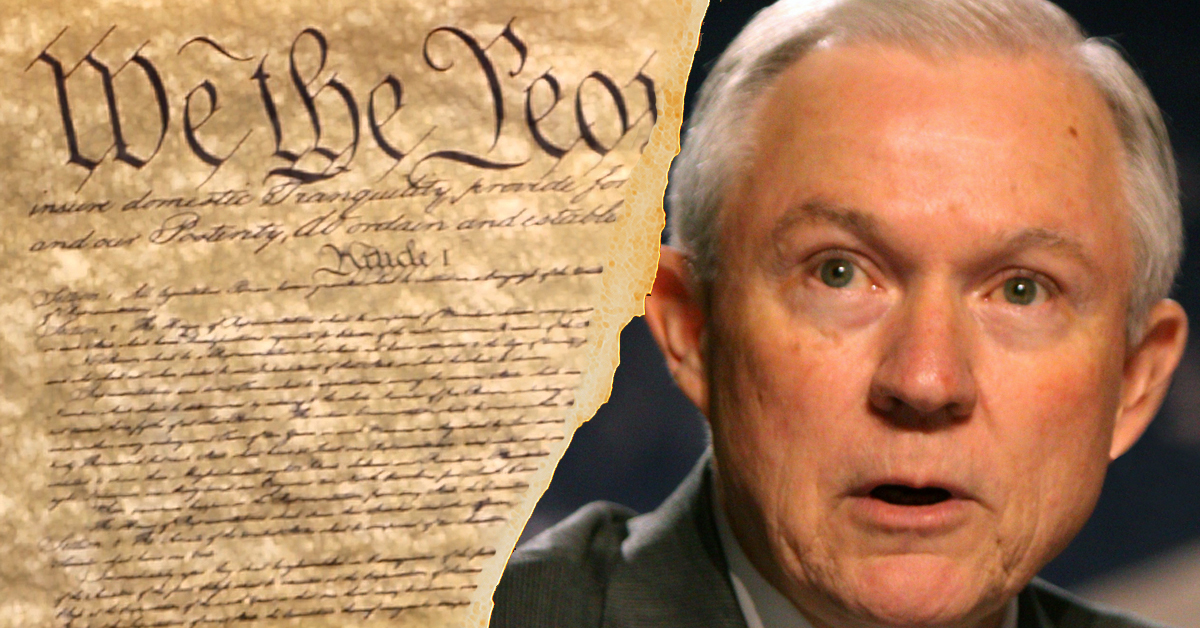 Attorney General Jeff Sessions said on Wednesday in a speech where he announced a DOJ lawsuit of the state of California, “There is no nullification. There is no secession.”

“Federal law is ‘the supreme law of the land.’ I would invite any doubters to Gettysburg, and to the graves of John C. Calhoun and Abraham Lincoln.”

The Department of Justice under Sessions filed a lawsuit related to California’s laws governing immigration enforcement. California effectively became a sanctuary state at the start of the year with implementation of Senate Bill 54, also called the California Values Act, which restricted how and when state law enforcement can interact with federal immigration authorities. The law repeals a requirement that state officials report to immigration officials when certain crimes are committed by persons with illegal immigration status. Assembly bill 450 created rules for how employers must handle federal immigration audit requests. Assembly Bill 103 restricts the ability of jurisdictions to contract with ICE to house immigrant detainees in local jails, and also gives the state Attorney General the power to inspect ICE detention facilities.

There is an old maxim, a principle of constitutional English law which partly informed the basis for the American legal tradition:

“Everything which is not forbidden is allowed”

Or, to put it another way, there must be a law against something for it to be against the law. With all due respect to AG Sessions, one could stare at the tombs of Calhoun and Lincoln or the battlefield of Gettysburg until their eyes grow weary, that would never change the fact that there is nothing in the U.S. Constitution that forbids secession and nullification. That’s right! Nada, zip, bupkus! As the Union’s chief law enforcement officer under the president, one would think that he’d know that. So, Mr. Attorney General, please don’t speak of civil wars and dead presidents; the Constitution is the REAL supreme law of the land, not every scribbling by Washington law-makers. If Sessions or anyone else denies a state’s right to lawfully seceding or nullify unconstitutional federal law, I would invite any doubters to quote the section of COTUS that forbids these powers to the states. Go ahead! I’ll wait… [taps toe] … [looks at watch] … [nods-off, recovers].

To protect the people of these United States against the encroachment of the federal government into legal areas that it wasn’t expressly authorized, the Bill of Rights clearly states:

The enumeration in the Constitution, of certain rights, shall not be construed to deny or disparage others retained by the people. – Amendment Nine

The powers not delegated to the United States by the Constitution, nor prohibited by it to the states, are reserved to the states respectively, or to the people. – Amendment Ten

This means that what’s listed in the Bill of Rights isn’t the limit of the liberties of the people; they are open-ended, except where amended. However, the government in Washington IS limited, and by the powers enumerated to it by COTUS. Washington may not exercise a power not given it via COTUS, nor deny a power to the the states and the people that is not expressly forbidden through COTUS. Such powers include secession and nullification, powers that the founders believed they possessed, openly discussing them, and on occasion even using them. (Note to the illustrious AG: see Fugitive Slave Act.)

Now, it’s understandable how Sessions has become frustrated with California’s resistance to cooperating with federal immigration law; illegal immigration is a big problem. However, he’s attacking this problem the wrong way. You don’t hit against secession and nullification, as if you had any right to, you show how the state is interfering with the rightful role of the federal government under the Constitution.

Remember how Sessions alluded to the COTUS supremacy clause of Article IV paragraph two? That says the that the laws of U.S. “shall be the supreme law of the land,” but only as expressed and limited by the Constitution. This is the other side of 10a, that properly enumerated federal powers can’t be usurped by the states. And, according to Article I, Section 8, Clause 4, a proper power of the general government is immigration. That is at least a legitimate argument, unlike this ham-fisted attack on secession and nullification. States like California and Texas are sovereign. What little sovereignty Washington has is delegated it from the states, and Washington must respect that sovereignty.

The Texas Constitution makes our right to reclaim our full-sovereignty perfectly clear, because you never know when an entitled Washington Attorney General, who’s evidently not read COTUS, will come along and start citing epitaphs as constitutional precedent:

All political power is inherent in the people, and all free governments are founded on their authority, and instituted for their benefit. The faith of the people of Texas stands pledged to the preservation of a republican form of government, and, subject to this limitation only, they have at all times the inalienable right to alter, reform or abolish their government in such manner as they may think expedient. – Article One, Section Two

Texas is a free and independent State, subject only to the Constitution of the United States, and the maintenance of our free institutions and the perpetuity of the Union depend upon the preservation of the right of local self-government, unimpaired to all the States. – Article One, Section One

In short, If Washington gets in the way of our state’s right to rule itself under the U.S. and Texas constitutions, we have a right to nullify and secede.

For many years, the pattern of federal overreach has been from the political left, and we’ve fought back.  But, it hasn’t exclusively been from the left; this time it’s coming from the right. Yet, we need to fight back with equal vigor because it’s not just about getting what you want politically, it’s about having a system where all parties play by the same rules. This is true of the states like California and Texas as well as the federal government. Washington’s inability to play by the rules and insistence that the states are merely vassals of Washington, not the sovereign entities they truly are, puts the future of the Union in doubt. Nevertheless, if a state doesn’t want to play by Washington’s rules, and they can’t legally nullify them, then they are free to cancel their membership in the Union and go it alone. Only the U.S. Constitution could stop them from doing so, and it doesn’t.