We’ve seen claims by the right of rampant election fraud, while the left claims there is none, or at least that it is negligible. As you will soon learn, the truth—as is often the case—lies somewhere in the middle.

In this first edition of a pair of articles, we will define our terms, discuss the purpose of casting a vote, and examine the evidence for and against election fraud. Although this article considers election fraud Union wide, my second article will focus on Texas and, in particular, the 2018 mid-term elections. 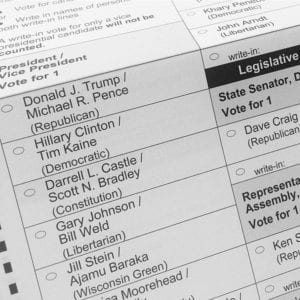 First we are concerned with the verb “vote,” which, according to Merriam-Webster means: “to express one’s views in response to a poll, especially: to exercise a political franchise.” “Election” means “an act or process of electing.” The root word, “elect,” means “to select by vote for an office, position, or membership.” Finally, what do we mean by “fraud?” According to Merriam: “intentional perversion of truth in order to induce another to part with something of value or to surrender a legal right.”

What is the Purpose of Casting a Vote?

The purpose of casting a vote is alluded to in the definition itself of “vote.” Yet, I want a more specific meaning for our purpose. When I cast a vote for “Bob Smith,” I am attempting to convey my intent. That is, I aim to record my support for “Bob Smith” in the cast ballot. I may or may not be successful, as was immortalized in the 2000 U.S. presidential election when “hanging chads” became a household term. Now, on to the evidence for and against election fraud. 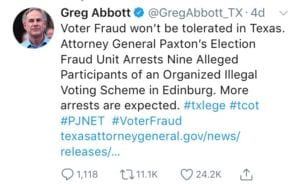 Election fraud, that is perpetrating false votes, exhibits itself many ways: double voting, dead voters, fraudulent addresses, felon voters, non-citizen voters, voter registration fraud, animals voting, vote buying and election official fraud are just a few. Several organizations, such as True the Vote and Project Veritas, have documented numerous election problems. Yet, as we’ll see in the next section, we must discriminate between all manner of election errors from willful fraud. Both True the Vote and The Heritage Foundation maintain databases of election crime and voter fraud. Heritage has recorded 1,177 proven cases of voter fraud, with 1,019 criminal convictions. Project Veritas captured election day video that strongly suggests illegal voting in Travis County.

One compelling case I am quite familiar with is that of Dr. Laura Pressley. In a 2014 Austin city council race against Greg Casar, Pressley lost. Among a number of election irregularities, she discovered evidence of systemic vote manipulation. In particular, unlike each of the other ten city council races that required run-off elections, her general and run-off election results are nearly identical. Pressley v. Casar is now on appeal to the Texas Supreme Court. There is election fraud, but how widespread is it?

The evidence against election fraud is documented almost exclusively by progressive organizations. The credible ones avoid claims of “no election fraud” and “no voter fraud” because, in fact, there are both. However, the Brennan Center for Justice has done an admirable job of discriminating election process mistakes from willful fraud.

In his 2007 report, “The Truth About Voter Fraud,” Justin Levitt, describes a number of election problems that are not fraud: clerical and typographical errors, false matching, dual registration and death records. Typographical errors include surnames misspelled, leading to a duplicate name in the voter registration file. False matching results in two people having identical names, born on the same day, living in the same county identified as a duplicate voter. There are incidents each year of a person casting a vote and dying shortly thereafter, resulting in the false claim that a dead person voted because of sloppy date comparisons.

Even putting aside election errors mis-attributed to fraud, the evidence for wide scale fraud is slim. Referencing The Heritage Institute database mentioned above, those 1,019 criminal convictions cover a 22 year period. That means the database records on average only 108 cases of fraud each biennial election. When compared to the number of ballots cast union-wide each election, Levitt’s claim—“… a look at the facts makes clear fraud is vanishingly rare …”—is well supported. (In the 2016 general election, 140+ million votes were cast, meaning one out of 1.3 million votes may have been fraudulent.)

After examining the evidence for and against election fraud, I cannot claim there is none. On the other hand, the rate of fraud is so minute that we can equally dismiss claims of rampant election fraud. Yet, this fraud must be prosecuted because the democratic process of our constitutional republic treats suffrage as sacrosanct. When election fraud is perpetrated in a strategic, close race, it may produce a highly leveraged result. In the second article on this subject I will examine election fraud in the Texas mid-term 2018 election.