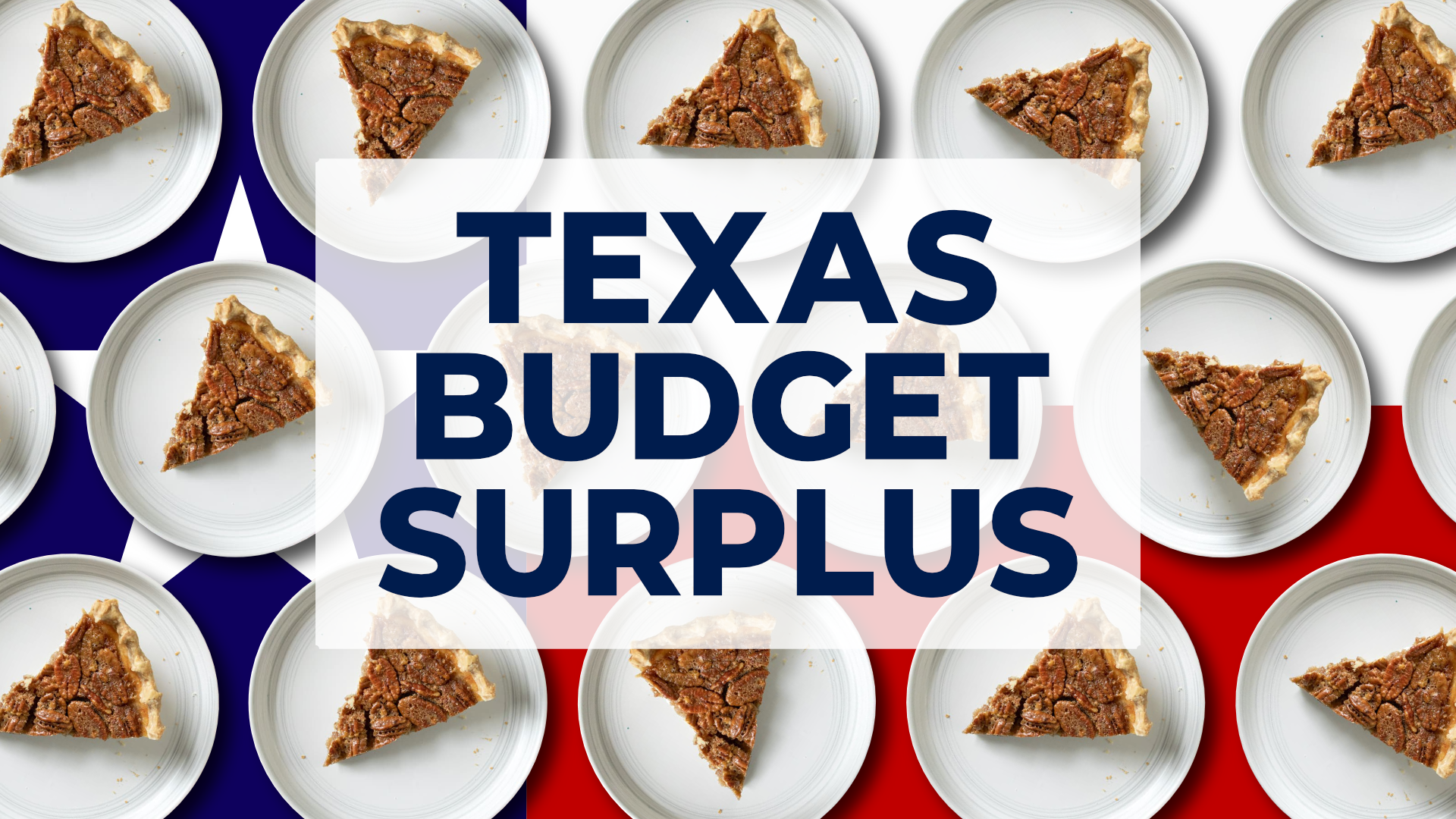 The good news is, thanks to a balanced budget and fiscal conservatism mixed with rising prices and an active economy, Texas is projected to have a 27 billion dollar surplus for the next legislative biennium.  The bad news is that now everyone wants a piece of the pie, and Texas will have to make some decisions about priorities for the future.

A booming economy has resulted in increased tax revenue, and Comptroller Glenn Hegar has predicted a substantial budget surplus available for the next legislative session.  Thus far there appear to be two main schools of thought as to what to do with the money.  Not surprisingly, these two schools are framed in the media as Republican and Democrat, a distinction that’s hardly meaningful in the Texas legislature.  Texas Republicans have had control of all three branches for twenty-plus years, and yet consistently fail to pass Republican priorities.  Texas Democrats have avoided many of the extremes of their national party, instead pulling Republicans back toward the center a bit.  “Humorously, there’s a story that’s … going around the Capitol that we have $1 trillion worth of requests for those $27 billion,” Paul Bettencourt said at the annual meeting of the Texas Taxpayers and Research Association in Austin. “There’s going to be a slew of requests.”

The basic Republican position is that the “budget surplus” is really tax money from the people.  If “they” collected more than they need, then in principle some of it should be “returned” to the people.  The most obvious way to do this would be to apply some of the surplus to property tax relief.  “When you have excess funds, part of the money’s got to go back to the taxpayers,” said Bettencourt, who heads the Senate Local Government Committee.

Dan Patrick, the Senate’s presiding officer, greeted Hegar’s July 14 budget surplus announcement with a laundry list of how he’d spend the money: $4 billion more for property tax cuts; an increase in the exemption from a home’s value for school taxes to $60,000, from $40,000; suspending state motor-fuels taxes for the rest of this year; and providing retired teachers with another “13th check,” to help offset their lack of cost-of-living increases.

“Texas homeowners must receive tax relief before we commit to any new spending,” Patrick said.

On the other side of the aisle, Austin Democratic Rep. Donna Howard said that GOP leaders’ talk of huge property tax cuts is “a disservice to having a real honest and open discussion.”

Howard ticked off “investments” that could soak up all of the $27 billion budget surplus — improvements to broadband, water-supply structures, transmission lines and paying the $6.3 billion of debt that electricity generators and other energy companies had to “securitize” after the 2021 winter freeze. She included full funding of TEXAS Grants for four-year college students and a community college tuition assistance program, saying it’s needed to improve the “educated workforce pipeline.”  Don’t do “knee jerk” tax cuts, but consider, “What is going to give us the long-term benefit that we need?” Howard asked.

Let’s first go for the low-hanging fruit on this issue:  Texas has a surplus, while the Federal government is carrying trillions of dollars of debt.  While it is true that Texas has received some of the benefits of the ridiculous Federal excess, it should be obvious that one model is sustainable and one is not.  No country or household can live beyond its means indefinitely.  When scared folks panic about “what if there were no Federal dollars,” they miss two relevant points here.  First, there are no “real” Federal dollars, only dollars confiscated from citizens or dollars made up out of nowhere.  Second, when Texas runs a surplus, we can make decisions that will help us in the future.  How do you prepare for retirement?  Steady contributions to a retirement fund.  While there is no “Texit fund” yet, steady contributions to improving Texas’ self-sufficiency in many ways amounts to the same thing.

Next, let’s talk about some “why” questions and see if they can be addressed with the surplus.  Why are property taxes so high?  The answer from the left and the media is consistently something like this:

The media answer is that we’ve got to spend money, so we have to have taxes, and since we don’t have income taxes, we have to have property taxes.  There are several faulty assumptions there.  First, do we “have to” spend money on everything Texas spends on?  Millions of dollars on college football coaches, for example?  A 60 million football stadium for a public high school?   Now I’m not just talking football here: some of the stuff Texas pays for with taxpayer dollars is misguided.    Next, it’s safe to assume we won’t have an income tax any time soon, especially since Texas voters amended the state constitution in 2019 to prohibit an income tax.  If we’re not going to have an income tax, and if property taxes are “too high,” then what are the options?

The Comptroller’s office says that the largest sources of state tax revenue are sales taxes, the franchise tax (the state’s primary business tax), motor vehicle-related taxes, and taxes on crude oil and natural gas production.  Did you notice what’s not on that list?  Property taxes. And why not?  Because property taxes are largely locally controlled and go to fund the local school districts.  How would state money go to offsetting high property taxes?  It would have to go to subsidizing school costs, and then the districts would have to return the favor to the taxpayers by lowering the tax rates accordingly.  Since public schools seem to be expanding at close to the Federal government pace, and they now include all kinds of “extra” things far beyond their original purpose, I don’t see them lowering tax rates any time soon.  Some kind of short term relief payments would end up being sold as some version of economic stimulus, with “‘more money in your pocket,” but to what actual effect?  The problem of property taxes is very complex, and even the so-called experts don’t agree on the solution, but I bet throwing “surplus” money at it indiscriminately won’t come close to fixing the actual problem.

Sales taxes and oil and gas production taxes are what’s driving the increase in revenue this go-around.  Given that these depend somewhat on supply and demand within the economy, it makes sense to me to leave these alone.  Alternatively, the surplus could be re-invested in areas that are related to sales and to oil and gas production.

The state has consistently struggled to retain employees, particularly in human service sectors.  Prison guards, mental health attendants, and direct support staff fill rates are very bad, sometimes below 60%.  If they need 10 staff, they have 6 or 7.  Even within the professional ranks, doctors, nurses, psychologists and specialized therapy spots are difficult to fill.  No one wants to work for the wages the state pays.  Even as inflation has challenged the economy at every level, did you know that the legislature has not raised the base pay across the board in 9 years?  They’ve increased the state retirement contributions, but increased the employee contribution to match.  One session they increased the health insurance package costs by a percentage, and then gave a “raise” that covered half of the increase in costs.

What do these state employees do?  They pay taxes.  They buy cars, and groceries.  They send their kids to schools and colleges.  They contribute to the economy. In addition to this, they provide services to some of Texas’ most vulnerable populations.  Do you want the criminals to have inadequate supervision?  Do you want those in the state mental health facilities to not have help when they need it?  What about those with intellectual disabilities?  Should they have staff to care for them?  Investing in the state-employed workforce helps more than just state workers.

What about “infrastructure”?  Is a surplus a good time to make a capital investment?  I know that’s how farmers work, for example.  The time to buy new tools or equipment is during a good year.  I don’t know what reasonable state infrastructure investment would look like.  That’s not my area of expertise.  Even so, it seems intuitive that the opportunity to build for the future ought not be wasted.
I don’t envy the legislature in budget cut years, but I don’t envy them in surplus years either.  Everyone will want a piece of the pie, and the legislature will be left to decide.  Winners and losers will have to be picked.  The question is, will the choices they make prepare Texas to be more self-sufficient?  To be more independent?  I hope they don’t waste the opportunity.