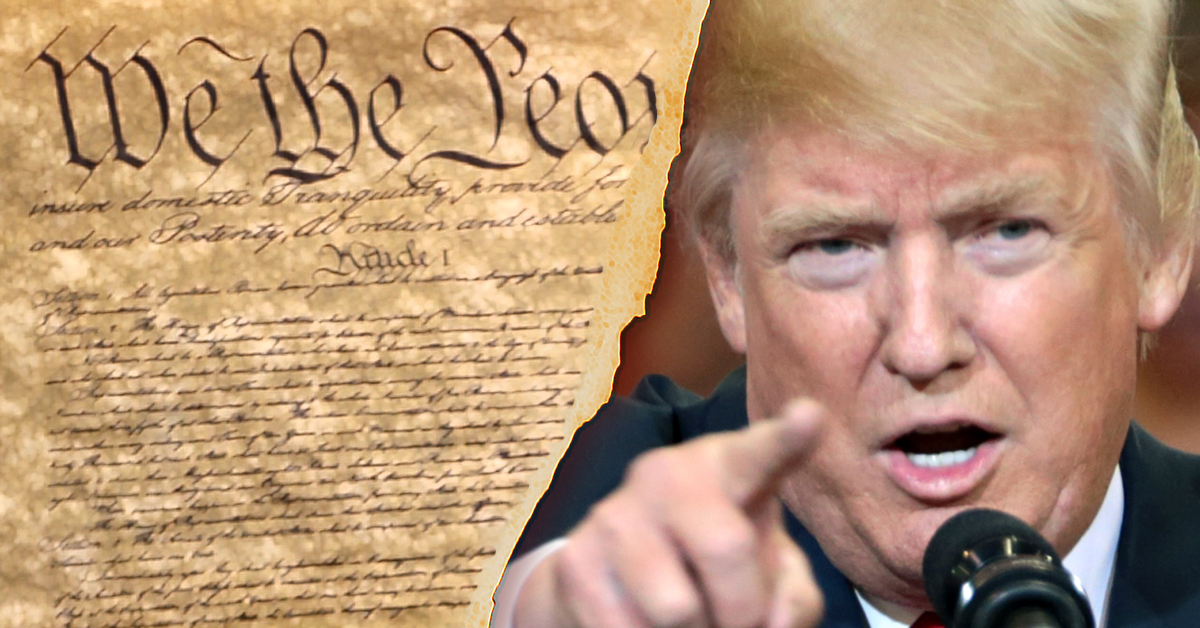 Yesterday, President Donald Trump met with Congressional law-makers to discuss issues related to the recent shooting at a school in Florida. However, what he said has been called a “BETRAYAL” by conservatives like Ben Shapiro, received blow-back from the NRA, and caused concern among Americans who care about the Constitution and the restoration of limited government.

Trump has recently pointed out that the government has failed in regard to mental health, and at yesterday’s meeting, the President expressed his wish that the mentally ill should not have guns. Certainly, there’s plenty of room at the state level to have properly adjudicate the temporary suspension of gun rights due to diminished capacity, though the U.S. Constitution forbids the federal government from doing so. However, Trump then said something very alarming for a U.S. President to say, something that if it had passed the lips of President Obama during his tenure would’ve had nearly the whole of Texas demanding independence tomorrow:

You know, the police saw that he was a problem, they didn’t take any guns away. Now, that could have been policing. I think they should have taken them away anyway, whether they had the right or not.

For those of you doing a double-take, you read it correctly. In one small utterance, the President of United States just argued against due process, protection against unreasonable search or seizure, and the right to bear arms! That’s amendments two, four, and definitely ten, dismissed in one fell swoop of Trump’s tongue. And just in case you’re thinking, “Naw! It has to be a mistake, something lost in translation,” here’s another gem from the same meeting:

Or, Mike [Pence], take the firearms first, and then go to court. Because that’s another system, because a lot of times, by the time you go to court, it takes so long to go to court to get the due process procedures, I like taking the guns early, like in this crazy man’s case that just took place in Florida. … To go to court would have taken a long time. So, you could do exactly what you’re saying, but take the guns first, go through due process second.

You can see these quotes with the video from the event at the Daily Wire’s article by clicking here.

For those of you who are still considering whether the President has such authority, let me state emphatically: The president does not have the legitimate power to suspend our rights under the Constitution, no matter what good intentions he may have for doing so. Nowhere in the Constitution is he given such power, and if he exercises it, it would be unlawful.

Now that Trump has said the indefensible, it’s time for those favorably-disposed to the president to run it through the old mental filter! Whenever Trump steps in it, especially where the Constitution is concerned, the first defense by his supporters is often, “Oh, he doesn’t mean it! Trump talks crap! What do you expect?” Others maintain, even in growing evidence to the contrary that “He’s a genius! You’ll see! This is all part of a multi-tiered plan to make 2A secure forever, and it’s simply too complicated for us mere mortals to comprehend!” Still others have an even less reassuring take, that of “Don’t worry! Trump’s got guys around him who actually understand the Constitution, and they won’t let him do that!” Maybe, maybe not. However, is it really too much to ask for a POTUS that doesn’t have to be graded on a curve in order to say anything positive about him, to expect him to understand the Constitution and know what powers he has and (more importantly) those he doesn’t, and to expect the Commander-in-Chief to be serious-minded enough to never threaten a violation of our liberties? Remember, this was the guy that was going to make America great again and restore what government had taken from us! How can we have hope that he will actually do that when you can never be sure that what comes out his mouth is really the truth? In this case, you better hope he’s lying!

Actually, in a way, this was a fortunate event. Government has just shown us it’s cards, revealing to us an important truth. With his comments, Donald Trump just confirmed for the rest of America what the people of Parkland, Florida (with unfolding revelations of police and FBI failures) are now learning: government can’t/won’t protect us, either from outside threats or from itself. Trump has in past shown his willingness to turn on dime with any issue (if he thinks he’ll get more love for it), and continually reminds us that he might do so again. His promises will always be subject to his rapidly shifting interests and the winds of a partisan press and a fickle public that Trump continually angles to woo. Clearly, Trump is not a man of firm principle. In fact, it may be that what Democrats were unable to get done regarding gun control (which Trump supposedly opposed), Republicans, led by President wind-sock, will get done for them. We’ll just have to wait and see what Senator Cornyn is cooking up for us in the next few weeks.

If Texas really wants to protect second amendment rights, and that of the fourth, the sixth, and the rest of them, then it’s about time to give up on this failed American experiment. The U.S. had a good run, but in the end, it wanted to discard its roots and become just like the other nations and unions of the world, where what little rights its citizens have are at indulgence of government rather than government deriving its powers at the begrudging consent of the people. It’s too early to tell if Trump’s comments will materialize into policy or law; only time will tell. However, Texas needs to reassert its independence now, before Trump makes another ridiculous unconstitutional proposal that he actually intends to follow through on! If we don’t, and we see the codified reality of Trumps words, it’s not as though we could say we weren’t warned.