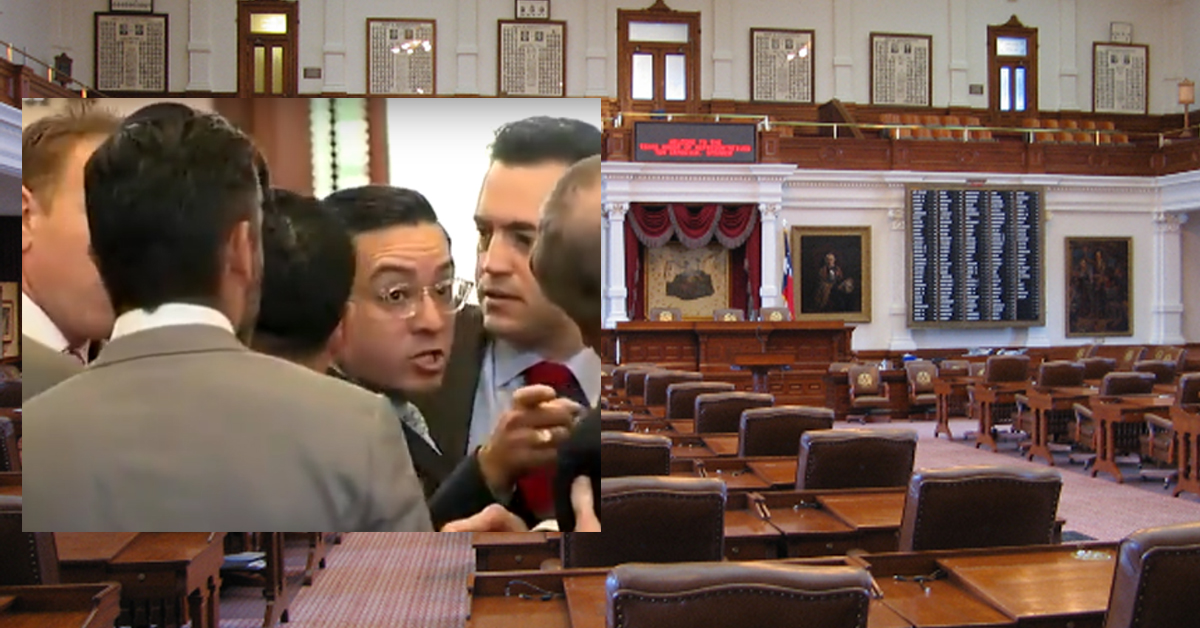 Yesterday, during the last day of the 2017 legislative session at the Capitol building in Austin, during an occupy-style demonstration in the rotunda and gallery by those opposed to the recently passed sanctuary city ban, a Facebook posting came out from Texas State Representative Matt Rinaldi, startling to those who were paying attention:

Today, Representative Poncho Nevarez threatened my life on the House floor after I called ICE on several illegal immigrants who held signs in the gallery which said ‘I am illegal and here to stay.’ Several Democrats encouraged the protestors to disobey law enforcement. When I told the Democrats I called ICE, Representative Ramon Romero physically assaulted me, and other Democrats were held back by colleagues. During that time Poncho told me that he would ‘get me on the way to my car.’ He later approached me and reiterated that ‘I had to leave at some point, and he would get me.’ I made it clear that if he attempted to, in his words, ‘get me,’ I would shoot him in self defense. I am currently under DPS protection. Several of my colleagues heard the threats made and witnessed Ramon assaulting me.

For most who have heard about this altercation from the main stream media, amid copious empathetic reporting on the plight of illegal immigrants, you probably heard about Rinaldi threatening to shoot Navarez. However, the details about Romero’s prior assault of Rinaldi and Poncho’s threats about getting Rinaldi were buried in the story, if mentioned at all. Thankfully there is video of the altercation. At about the 10 second mark, you can see certain members of the House make aggressive moves towards Rinaldi, apparently shoving him back. Nothing of the skirmish was audible, but at least this part of Rinaldi’s statement is verifiable.

In comments about the events, Texas Nationalist Movement President Daniel Miller had the following to say:

The Feds created a climate where there is a fifth column at work here to overturn the rule of law and supplant it with mob rule. Their willing accomplices in the Texas Legislature are finally being shown for what they are. Texas will not bow to the tyranny of one man nor to a group of men and certainly not to thugs. If pushed we will prove ourselves worthy inheritors of the men of Gonzales and San Jacinto.

This observation of Miller’s puts this whole situation back into proper perspective. In the end, it is the federal government’s deliberate sub-standard border enforcement and winking at on-going violations of the law that is to blame for the current border strife and accompanying political tension. While illegal immigrants are responsible for making their own choice to come here without obtaining permission first, they certainly didn’t create the circumstances that made this problem possible. Politicians did that.

Texas is a nation of laws and borders, and the multi-racial people of Texas expect that both be respected. It doesn’t matter if you’re from Sweden or Tijuana, you need to show deference and courtesy for the land you visit or want to call your home. But even with the issues caused by illegal immigration, I believe that there is more sympathy in Texas for an illegal alien trying to earn a living than there is with a violent politician trying to exploit them for political gain and the federal government they ally with.

For more info and analysis on this event, click below: