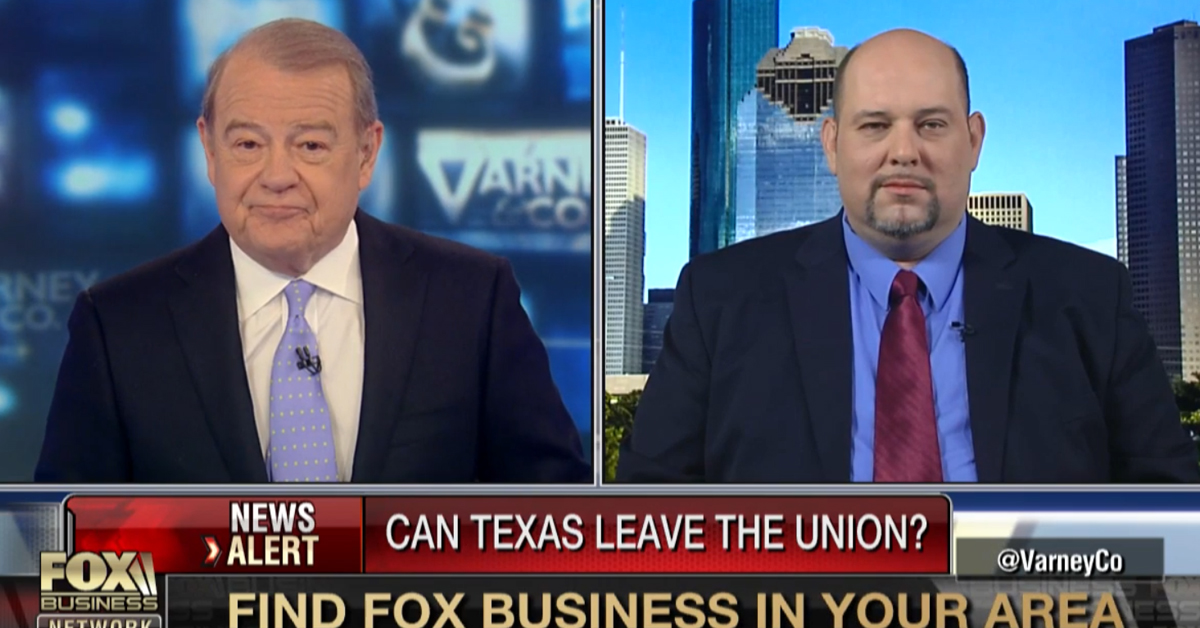 Texas Nationalist Movement President Daniel Miller, in the latest of a series of media appearances leading up to this week’s release of his new book, Texit: Why and How Texas Will Leave the Union, appeared on Fox Business Channel’s Varney & Co today. This was a great opportunity to see the right of Texas independence affirmed and agreed upon before a coast-to-coast audience. However, in this interview, the question of “Can we resign from the Union?” was less at issue than that of the process it should take.

Stuart Varney began simply by asking Miller why he wanted to leave the Union. Miller responded:

There are a lot of reasons, but if you were to condense it down to what we hear from people on the street every day here in Texas, it boils down to this: Texans are sick and tired of being governed by 180,000 pages federal laws, rules, and regulations administered by 440 separate agencies and two and a half million unelected bureaucrats. At the end of the day, Texans believe that the best people to govern Texas are Texans.

“Ok. I think you’re making a political point, and it’s well taken,” said Varney, “but I don’t think you have a prayer of seceding from the Union.” Stuart continued, saying, “You need two-thirds majority in the House and the Senate to do that, and you’ve got to get a majority in three-quarters of all state legislatures. Not going to happen!”

“That’s not true,” Replied Miller. “It’s actually one of the things I wrote about in the book.”

There is this misconception out there that somehow any state that is part of the Union needs permission from the other states to leave the Union, and that’s not entirely the case. And, I’ll give you a great example of what that looks like. It’s akin to saying that when the UK decided that they wanted to leave the European Union that they had to have the blessing from all the other countries in the European Union. There is no constitutional prohibition here in the United States for any state to leave the Union.

Miller’s assertion is correct. The Constitution has a list of powers that are prohibited to the individual states, such as imposing tariffs, creating treaties, or coining its own money. However, no where on that list does it say that a State once in the Union cannot leave of its own accord.

What you have to do is look at what the law is in Texas, and Article one section two of the Texas constitution is very plain that the right to reform, alter, or abolish our form of government exists and resides solely with the People of Texas. 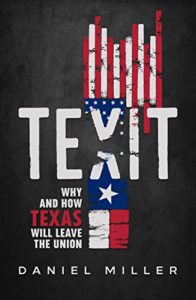 Later, after Daniel’s exit, Varney played a small clip of Miller’s exchange for Andrew Napolitano, asking him to comment. Napolitano seemed supportive of Daniel’s assertion of a state’s right to independence, consistent with the Judge’s previous independence affirmations, but he maintained his disagreement on how such a resignation from the Union should take place. “Ideologically and historically I agree with him,” said Napolitano. “However, the last time the Supreme Court looked at this, it said leaving the Union is akin to amending the constitution.” Napolitano was referring to the Texas v. White Supreme Court decision which applied the Constitution’s amendment requirements to that of secession.

In addressing the procedural disagreement on independence, there are many ways to demonstrate how the conventional thinking on this is incorrect. First, the Supreme Court has already de facto over-ridden the essential argument of Texas v. White. In order for the largely Lincoln-appointed court to conclude that the U.S. was inseparable, Chief Justice Salmon P. Chase’s court took the poetic phrases of “perpetual union” and “perfect union” from the preambles of the defunct Articles of Confederation and the current Constitution, claiming that these preambles were binding law as opposed to commentary. That was found by a later court, in Jacobson v. Massachusetts, to be incorrect, and the U.S. “does not derive any of its substantive powers from the Preamble of the Constitution,” much less the abolished Articles of Confederation. Additionally, under the Constitution, the court is not given power to create law. By assuming requirements for secession not found in the Constitution, TvW attempts to legislate from the bench. Lastly, I would cite the federal government’s obligations as a signatory of the U.N. charter to respect the right of “self-determination.” As all treaties are considered binding by the U.S. Constitution, as noted by Chief Justice Marshall in 1829, so too would the U.N. charter be binding.

If the people of Texas, on their own, decide to return to full sovereignty in accordance with the tenth amendment and Article one sections one and two of the Texas constitution, it shall be. For, there exists no other lawful restrictions on our ability to do so. And while it’s good that our friends over at Fox Business are willing to give air-time to this important issue, it’s also important to fully understand the rights we Texans hold as a State and as a people.

Click on the links below to see the Daniel Miller interview: