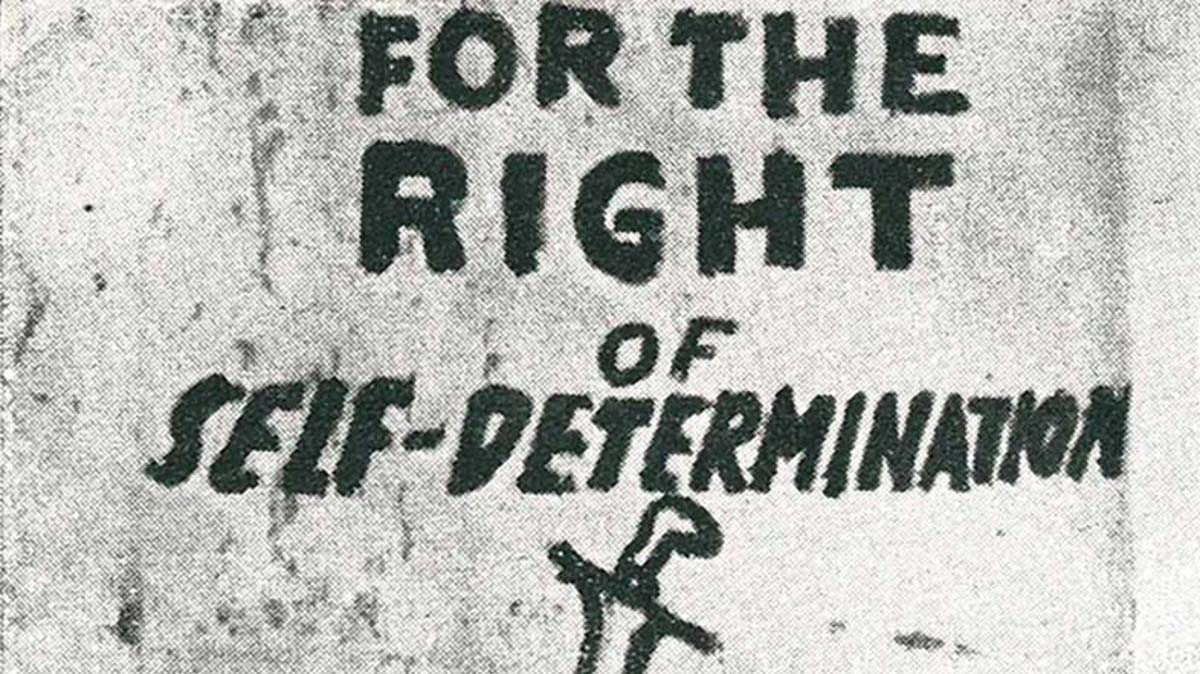 Opponents of secession in the United States often choose from several reasons as to why no member state of the United States should be allowed to separate from the rest of the confederation. Some antisecessionists say it’s bad for national security reasons. Others oppose secession for nationalistic reasons, declaring that “we”—whoever that is—shouldn’t “give up on America.”

One of the most popular reasons to oppose secession is that people will pass “bad” laws in places allowed to live under their own governments. That is, we’re told that without federal “oversight” over state and local communities, independent states would deny basic “rights” such as getting an abortion, voting without ID, or guaranteeing that every cake-shop owner is forced to bake cakes for same-sex couples. These independent governments, we are told, would also fail to enforce “progressive” regulations such as bans on fossil fuels and paying workers a federally imposed minimum wage. Therefore, the story goes, these places must be forced—by military means if necessary—to comply with the US government’s mandates and regulations.

Yet far more tolerance is extended to the rest of the world—a place composed of 190-plus independent states—where governments adopt their own laws. Only in a select few cases—think Russia, Iran, and Syria—do we hear that the US government must intervene to ensure—by force, of course—that people in these parts of the world adopt the “right” laws. Everywhere else—as in Peru, India, Canada, or Poland—it’s perfectly tolerable that laws be set locally in accordance with local values. we are told. Those places are democracies, after all, and we’re told democratic institutions establish “legitimate” government.

Why is it that some governments are “allowed” self-determination by the US government but any area presently within the national borders of the US—including member states with democratically elected governments—is to be denied self-determination until the end of time? The answer appears to be a mishmash of nationalism, half-baked “social contract” theory, and the old-fashioned desire to dominate others “for their own good.”

Antisecession Is about Extending Washington’s Control

Opposition to secession in the name of preventing “bad” policy has many adherents across the political spectrum who place great faith in the ability of the US Supreme Court and other federal technocrats to “protect rights,” which they supposedly accomplish by deciding whether or not states and local governments conform to federal notions of “good” law. The desire to deny self-determination to state and local governments in the US, however, appears to be especially intense on the Left. For example, in a recent article in The Nation opposing “blue-state secession,” Paul Blest contends that secession by blue states would be “cruel” because it would allow red-state governments to be unhampered by the US federal government. This, presumably, would enable conservatives to violate the human rights of “marginalized people” wholesale. More specifically, Blest believes secession should not be contemplated because it would limit the reach of federal mandates that “accommodate” transgender students and guarantee access to abortion (among other presumed benefits of federal control).

Indeed, the idea that American separatists might be able to run governments anywhere without a federal babysitter strikes much of the Left as abhorrent, to say the least. We can see this in a recent article from New Republic in which author Brynn Tannehill warns that conservative state officials are “lining up” to pass new laws against birth control, “ban books,” “rig democracy,” and generally oppress groups conservatives allegedly hate. Tannehill contends that this is all part of a conservative plot to create “two Americas,” or, as a CNN piece put it in July, build “a nation within a nation.” Whether this leads to “soft secession” or “hard secession,” Tannehill concludes the answer is for the Left to reassert federal control over these separatists and ensure that enlightened federal policies are imposed on red states. Otherwise, these states will continue their descent into a nonprogressive “hellscape.”

Most of the World Gets to Make Its Own Laws

The hysteria over abortion or voter ID never seems to extend to the world beyond the US border, however. This is true even though many of the “progressive” states of Europe have gestational limits on abortion that are more strict than was the case under Roe v. Wade and even though abortion is largely illegal in Poland. Latin America employs a wide variety of restrictions on abortions that would be labeled intolerable by progressives were such laws to be employed in the US. In Iraq, where thousands of Americans died to install a progressive democracy—or so we were told—abortion is illegal. In all this—so long as these countries are considered “allies” by the US regime—we never hear how the US must launch a humanitarian military operation there to preserve what the US Supreme Court has decided is a “right.” Similarly, most democratic regimes require identification to vote in elections, although American leftists tell us this amounts to “rigging democracy.” Meanwhile, same-sex marriage is banned in parts of Latin America and eastern Europe, and  in half a dozen European countries, only civil unions are considered legal among same-sex couples. Of course, same-sex marriage is banned in most of Africa and the Muslim world. Again, where are the calls to send in federal agents to ensure the protection of human rights in all these places? Certainly, advocates for abortion and same-sex marriage will demand that laws be “improved” in these foreign jurisdictions. But it is also generally accepted that these changes should be brought about through local institutions, and that local self-determination is to be—more or less—respected.

Yet far smaller deviations from the progressive consensus are treated as grave violations of human rights should they take place in Texas or Idaho or Arizona. Just imagine if the government of Arizona were to declare, “We’re now subject to federal law in the same way as Mexico, and we will determine our laws in accordance with our own democratic institutions.” That is, Arizona would be saying it gets to set its own policies without permission from Washington in the same way that most of the world now does under the status quo. Arizona, after all, has a democratically elected legislature and every other institutional feature that would qualify it as a “democracy” even according to global elites. Would Arizona then be afforded the same degree of self-determination as any other democracy somewhere else on the planet? Of course not. Rather, we would be sure to hear howls of protest from Washington elites and demands that the US government send in the marines to ensure that these traitors and “authoritarians” in Arizona take orders from Washington. We would hear about how any attempt at defending local sovereignty would be a human rights disaster and must surely be motivated by nefarious goals—most likely racism.

In order to deny Arizonans the same self-determination afforded to Mexicans right across the border, opponents of secession have to make the case that there’s something “special” about the people inside the US border drawn by politicians long ago.

There are several strategies employed here. One is to claim that there is no “need” for local self-determination in the United States because all residents of the US member states are “represented” in Congress. That is, seven million Arizonans are “represented” by nine Arizonans who sit in the House of Representatives and make up 2 percent of the voting population of the House. In the Senate, seven million Arizonans are “represented” by two US senators. The US Congress consists of eleven Arizonans and 524 non-Arizonans. For many opponents of secession, this is what passes for democracy and political representation, and it supposedly justifies the denial of local self-determination. Rather than have any real say in federal laws that affect Arizona, Arizonans must submit to federal laws decided by five hundred or so people from other states. Of course, Arizonans could always appeal these laws in federal court, where decisions would ultimately be made by nine federal judges, none of whom are from Arizona.

Moreover, there is the nationalist claim that relies on emotions and maudlin appeals to national unity and feelings of solidarity. These are the people who insist “we are all Americans.” For that reason, no portion of “free” America is ever allowed to leave. These people also tell us—less convincingly every year—that Californians have fundamentally the same values as people in Texas or Idaho or Kansas. For that reason, there is a “natural bond” among Americans. If this alleged bond were as strong or as natural as advocates claim, though, we wouldn’t find that more than one-third of Americans polled support secession. Notably, it’s not up to regular people to decide for themselves if they “feel” American or feel a bond with other “Americans” two thousand miles away. Elites in Washington will let you know with whom you share a special spiritual and national bond within the warm embrace of the “homeland.”

Another claim used to deny self-determination is the idea of the “social contract.” By this way of thinking, all residents of US member states have voluntarily agreed to submit to all US laws in some fashion. How exactly this voluntary consent to US law comes about is never quite clear. Obviously, no living American was involved in the creation or signing of the US Constitution. Some advocates of social contract theory claim that residents somehow grant “tacit consent” to US law simply by not emigrating to another country. This absurd claim was already dealt with long ago by both Adam Smith and David Hume, who mocked John Locke for suggesting the idea. The idea nonetheless persists.

Moreover, many parts of what we now call “the United States” were not even annexed to the United States through any consensual process. No vote was taken of the residents of Louisiana before it was added to the United States. In fact, the French-speaking Louisianans complained bitterly of the mistreatment they received at the hands of their new Anglo overlords. The Floridas and the Pacific Northwest were added as a result of great-power negotiations, not by local consent. Virtually all of the American Southwest (plus California) was added to the US through a war of conquest, after which the Mexicans were forced into signing the Treaty of Guadalupe Hidalgo. As a result of these wars, diplomatic machinations, and accidents of history, we’re now told that being part of the United States is all a matter of amicable consensual agreements. Therefore, any part of the United States now seeking to break off will be forever prevented from exercising any self-determination.

In any case, the path by which a member state of the US “joined the union” one or two centuries ago hardly demonstrates “consent” in 2022. The fact that some long-dead people signed a constitution centuries ago does not make rights of self-determination forfeit today. Residents of US member states are not fundamentally different from people across the world who are entitled to govern themselves without the approval of elites in Washington.

In this article:featured, Mises institute, secession