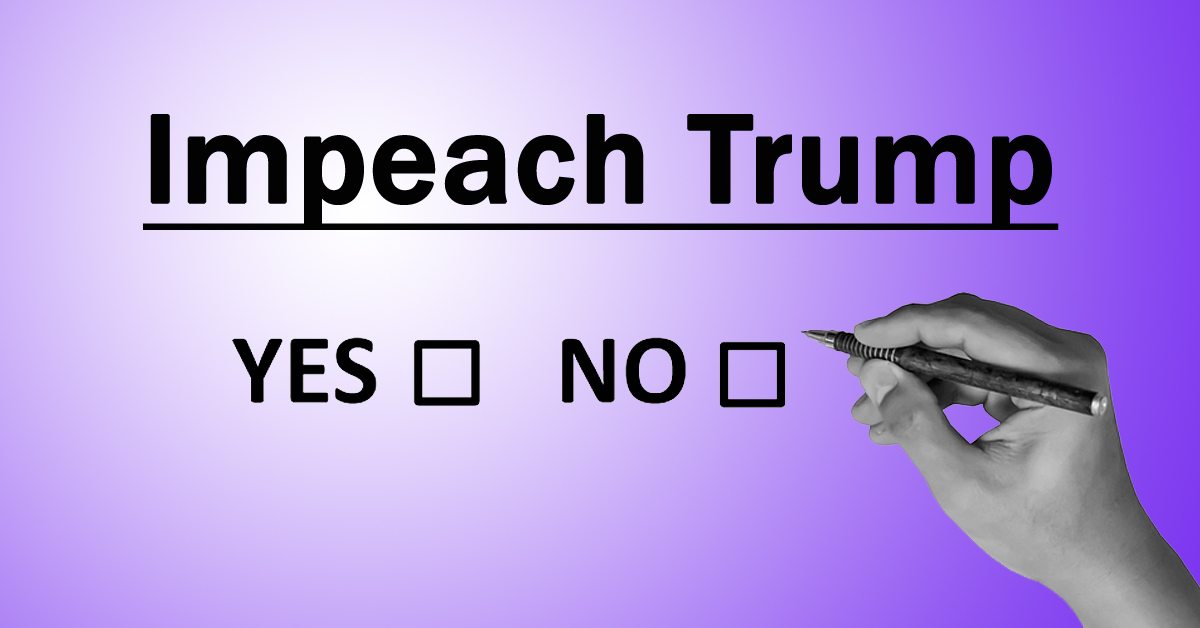 With the cloud of scandal—real and imagined—hanging  over the head of their standard bearer, and having compromised away their pledge to abolish Obamacare, along with many other unprincipled compromises, Republicans have completely forgotten their roots, dissolving into lightweight progressives. Smelling blood, and wishing to appease their far-left base, the Democrats are seriously looking into presidential impeachment.

As reported by Alex Roarty in McClatchy’s DC Bureau, Democratic National Committee strategists are considering polling their broader base to determine the level of support for impeachment. The Democrats pushing for impeachment have discovered the clause “high crimes and misdemeanors” in an otherwise forgotten document, the United States Constitution. Article II, Section 4 reads “The President, Vice President and all civil Officers of the United States, shall be removed from Office on Impeachment for, and Conviction of, Treason, Bribery, or other high Crimes and Misdemeanors.” 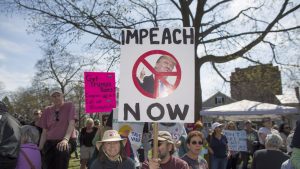 About 50 anti-Trump demonstrators gathered outside the Sheraton Hotel in Raleigh on May 12, where Sen. Richard Burr and Sen. Thom Tillis were scheduled to appear. They carried signs calling for a special prosecutor and for President Trump’s impeachment. Image by Chris Seward (cseward@newsobserver.com).

More cautious Democrats are pushing for an independent commission to investigate the various allegations of wrongdoing by President Trump. Two issues are front and center in their minds: perceptions and the mid-term election. They do not want to be perceived as overturning the election through accusations and innuendo. For example, Rep. Adam Schiff (D, CA) said “No one ought to, in my view, rush to embrace the most extraordinary remedy that involves the removal of the president from office.”

Insofar as the mid-term elections in the Senate are concerned, Democrats must defend ten seats, half of which are in states that Trump won handily. In contrast, Republicans only have to defend seven seats. As such, should Democrats successfully impeach the President, it is doubtful that they’ll have the votes necessary to remove him from office, making this pursuit futile.

The New York Times summarized the conundrum of the Democratic Party: “Most congressional Democrats are still wary about calling for Mr. Trump to be frog-marched out of the West Wing. The expectations of their base, they believe, are outrunning what is feasible as long as Republicans control both chambers of Congress.“ Certainly, removing a Republican president while his party holds all the cards would be very difficult. However, in the House, forecasts for Democrats in 2018 look very good. If they retake the House of Representatives, impeachment, if only as a political tool to weigh down the President, seems feasible. As impeachment is a political affair, politics will guide it, and not necessarily the criminality of the charges, or lack thereof. If politics accede that the standard has been met, it will be so.

Additionally, part of Trump’s problem is his inability to command the loyalty of his co-partisans in Congress. Could this be because Trump is often seen as a walking faux-pas, not at all interested in advancing the GOP cause, but rather himself? Partly. However, if you watch the actions of the GOP Congress, to say that they’re in no hurry to advance the traditional goals of their own party for the last generation is an understatement. In any event, not having that loyalty, nor seeming able to earn it, in an impeachment scenario the president would not be able to count on partisan ties to get him out of that jam. For either principle or their own fortunes, the GOP could see some defections to the impeachment cause.

By now it should be apparent to any Texan that they shouldn’t hope in Republicans to restore our traditional liberties. In addition to being incapable of sticking together on a common Republican vision, led by a supported and capable Republican President, they have failed to restore the Union to its constitutional roots and have, in fact, openly abandoned that goal. No one knows if impeachment and removal is in store for this President, but one thing seems certain, a fate proven more likely with each GOP politician that refuses to stand by their stated convictions: If Texans are to preserve their state and federal constitutional pledges, “to the preservation of a republican form of government”, they must do so as “a free and independent State”… Proud Texan, demand a referendum on Texas independence now while you still have a modicum of state sovereignty. Your freedom, and the liberty of your children and grandchildren, depend upon it.