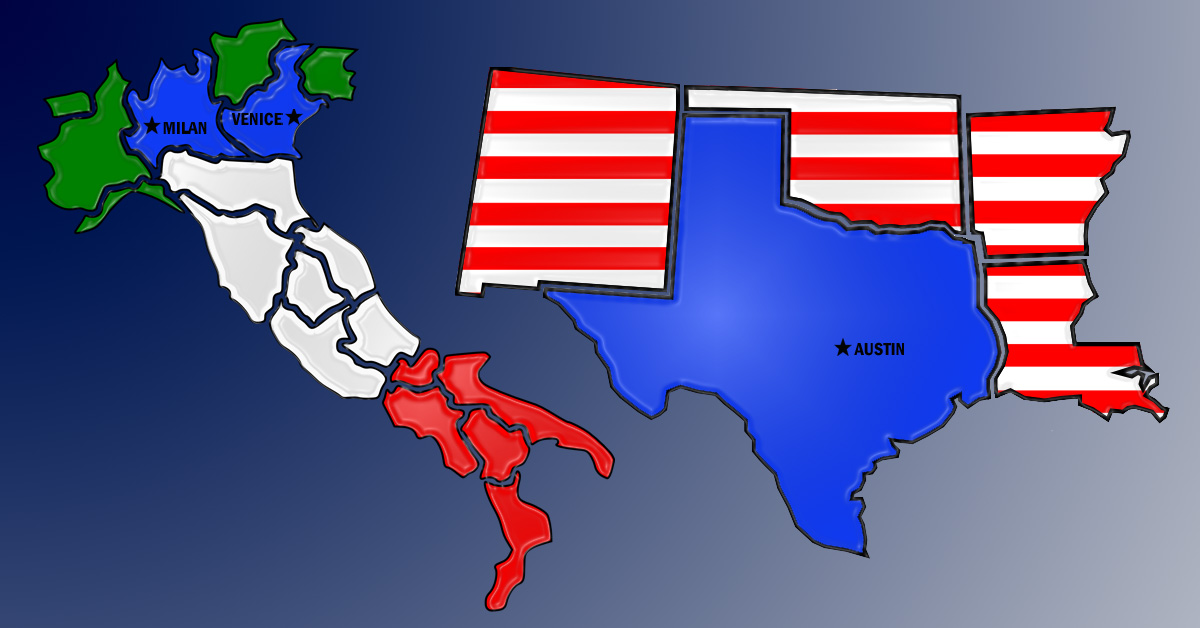 Two northern Italian regions, Lombardy and Veneto, last Sunday voted on whether their governments will work towards taking powers back from the central Italian government in Rome. The city of Milan is the capital of Lombardy, a region that is home to 5 million people.  Veneto is led by the city of Venice, and has roughly ten million people in the region.  The vote was essentially a yes/no vote on one simple question: should the states seek more autonomy from the Italian government in Rome?  Some have likened this to asking Italians if they love their mothers, but silly paternalistic notions of government aside, the result was clear: it was a landslide for more independence from a government that the People don't believe represents them as well as they could.

Only Texas’ elected political class stands between Texas citizens and an opportunity to increase our freedom through full independence.

When it comes to our home country, Texas, the Italians have a few advantages.  For one, their constitution explicitly allows a referendum to ask this exact question.  The Texas constitution enshrines political power in the people, and establishes our right to change or abolish the government (article 1, section 2), but we have no referendum process.  In our case the referendum process has to be approved by the legislature, the very same legislature that has held back Texas autonomy measures for many years, including the recent attempt by Texas Representative Cecil Bell. Also, their government officials have encouraged the referendum without publicly taking a side.  Ours continue in silence or opposition to increasing our autonomy, quieting the voice of the people.

Even so, Texans love their mother land, and we love our independence.  The list of independence votes and votes for increased autonomy continues to grow world wide.  Scotland, Britain (Brexit), Catalonia, and now states in Italy have had public votes.  Only Texas’ elected political class stands between Texas citizens and an opportunity to increase our freedom through full independence.  The world continues to show us that it can be done, strengthening our resolve that Texit will occur sooner rather than later.  For now, we wait, confident that we will have our turn, and that Texas will again lift its head and stand among the nations.