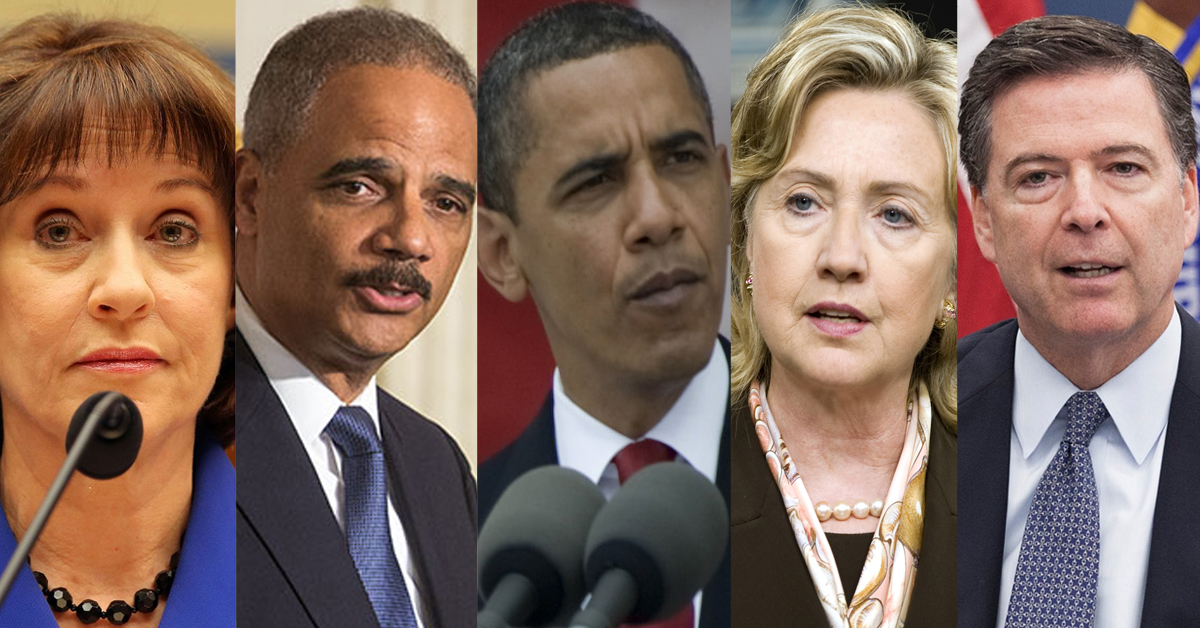 In recent days, Trump lawyer, Michael Cohen, found his house raided by federal law-enforcement and himself under criminal investigation for allegedly paying hush-money to a porn-star (with whom the since-elected president allegedly had sexual relations) with funds that came from a home equity loan. It’s too early to say if the case has merit, but it’s clear that this is connected to Special Counsel Robert Mueller and the federal fishing expedition into President Trump. However, if you remember during the election, far from being the focus of a special prosecutor, candidate Trump made promises of having a special prosecutor appointed to look into crimes committed by Hillary Clinton.

‘If I win, I am going to instruct my attorney general to get a special prosecutor to look into [Hillary’s] situation because there has never been so many lies, so much deception.’

Clinton and her scandals aside, there are additionally many names that pop up from the prior eight years that would make good candidates for prison. However, during all the swamp-draining that’s supposed to have happened over the last two years of Trump’s watch, nothing significant has yet occurred. Even though Trump’s initial promise was a little beyond the scope of his authority, there still should have been enough smoke to warrant serious attention and enough of a mandate to launch a competent investigation into the activities of some of these Washington elites. It even seemed likely, with as egregious as the offenses committed by some were, there would have been conviction by now. However, to date, there’s been none. So, why aren’t they locked-up?

Here are some of the elected and appointed federal officials that should have at least been the focus of a serious investigations into their misuse of federal power, if not already been doing time at Club-Fed.

Lois Lerner admitted that conservative groups applying for tax-exempt status were discriminated against by the IRS while under her authority. This supposed non-political agency seemed weaponized against President Obama’s political enemies on her watch. When called to testify before congress, she made a statement about her innocence and then (inexplicably for an innocent) pleaded the fifth to prevent questioning. It was determined that she had waved her 5a rights by beginning with a statement, but that was after the fact, and congress later failed to get her on record. Lerner was allowed to retire and has not had to answer for the conduct of her agents nor herself.

Attorney General Eric Holder, President Obama’s self-described “wingman,” was found in contempt of congress for his stone-walling the congressional investigation into Operation: Fast & Furious. This federal operation, where the administration allowed the sale of fire-arms to Mexican drug-cartels, ultimately resulted in the death of a federal Border Patrol agent. While the contempt charge is “punishable by a maximum $100,000 fine and a maximum one-year sentence in federal prison,” Holder is a free man and even rumored to be considering a presidential run.

Picking up for Eric Holder after he left the Obama administration, Attorney General Loretta Lynch is probably best remembered for her unofficial tarmac meeting with ex-President Bill Clinton, candidate Hillary Clinton’s husband. Just before it was to be publicly announced whether Hillary would be charged by the Justice Department concerning her repeated gross mishandling of classified document as Secretary of State, this secret chat between Bill and Loretta took place that least bore the appearance of impropriety, catching the attention and imagination of the media. Though there has been an investigation into discovering the person responsible for leaking details of the meeting, thus far, no investigation has determined whether the meeting focused on a corrupt deal between the Clintons and Obama’s AG on sparing Hillary from possible criminal charges. Regardless, the result was the same as if there had been: Hillary beat the rap.

FBI director James Comey shocked the Union after declining to recommend charges against former Secretary of State Hillary Clinton. This came subsequent to his admitting that evidence confirms Hillary violated federal law by keeping a private server for storing classified documents, some files of which were at the highest levels of secrecy and sensitivity. Comey justified his decision by engaging in a little impromptu amending of the existing criminal code. Comey claimed that Hillary didn’t possess the proper “‘intent'” necessary to bring charges, even though the law Comey cited, 18 USC 793(f), contains nothing about intent. Though he was eventually fired by Trump for unrelated reasons (a rare consequence for this bunch), he has yet to be formally investigated, even though evidence has since been uncovered that Comey may have decided to not recommend charges months before even conducting a formal interview with Clinton and concluding her investigation.

The accusations against Secretary Clinton are numerous. In addition to her misuse of classified documents, charges undisputed by none (but the most blindly-loyal) and if leveled against most would result in a lengthy prison sentence, her activities with the Clinton Foundation are nearly as infamous. In this case, the evidence strongly suggests that there was a “‘pay to play‘” arrangement between the Clintons and countries or persons wanting to purchase influence in the Obama White House or a possible future Clinton administration. Generous donations were made to the foundation in proximity to the payee receiving favorable treatment. Though an FBI probe has been looking into this, nothing close to filing charges has been attempted. Clinton yet remains at liberty, and the looming questions about her activities remain unanswered.

At the center of all of these scandals is former President Barack Obama. Though he always maintained that each instance of malfeasance in his administration went on without his knowing, incredulously claiming that he first learned about them on the news, there has been no serious investigation to establish what the president knew and when he knew it. While Obama’s violations of the Constitution and federal law (from DACA to his post-hoc executive re-write of Obamacare) are too numerous to completely cover here, it is curious that even his parting shot before leaving office, the printing of federal reserve notes to be laundered into Swiss francs and given to the Iranian terrorist regime, has not even led to his being called to answer questions before congress. While impeachment and removal should have the proper consequence for the actions of this president, since it never was attempted, it seems that President Obama will remain home-free.

While I could go on to talk about other politicians and apparatchiks that would look good in stripes (such as Huma Abadin, Cheryl Mills, or Susan Rice), I think the point has been made. For the politically well-connected, there seems to be no justice. Washington’s elite and their lackeys do what they want and rarely have to answer for it. And even if Donald Trump were sincere in his vow to drain the swamp, he’s thus far failed. Not one of these political bad-actors has had to account for their misdeeds, and the reason for this is quite simple: the Union has grown too large and too removed from the people it is supposed to be accountable to. This is true to such an extent as to put it beyond normal reform. And if an outsider, as Trump supposedly is, can’t get any traction in this area, who can?

The massive corruption in Washington walks hand-in-hand with the systemic subversion of the Constitution and its limits on the scope and scale of federal power. Washington has, in many ways, flagrantly violated its contract with the states it is was created to serve. If Texas wants to see more accountability for its elected officials, it will have to close the distance, this yawning chasm that exists between the people and their representatives, by resigning from this truly irredeemable Union that no longer values ethics and restraint. Either that or we’d better buy a new houseboat to park in this ever-expanding swamp.