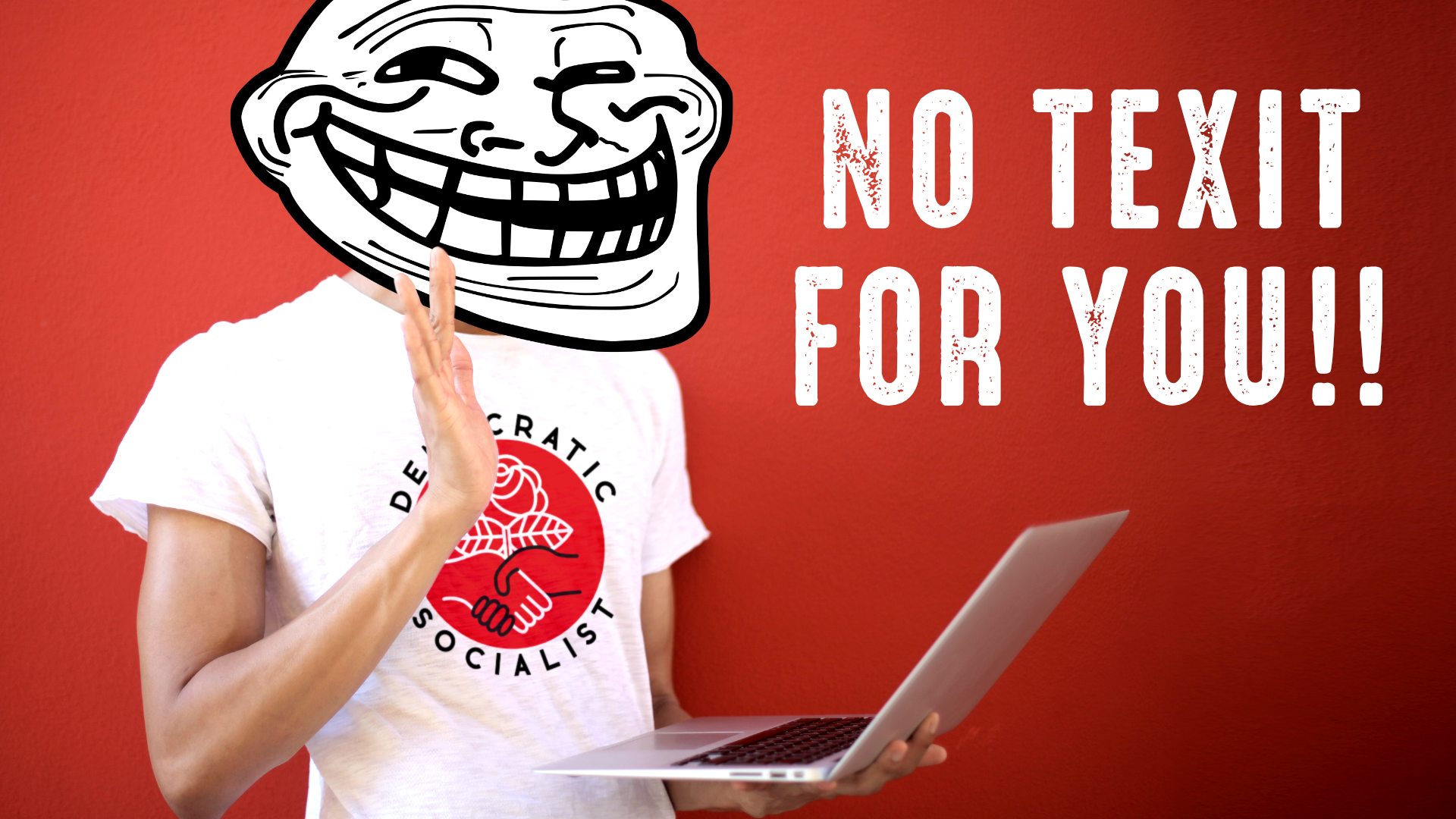 Who is opposed to Texas independence?  Big-city “Democratic Socialist” school teachers, for one.  An internet troll from last week highlights the anti-Texit stereotype.

Those of us in favor of Texas sovereignty may have noticed an uptick in activity from the TNM and its associated social media accounts.  Along with this uptick comes an increase in social media trolling and negativity. When we start to move the needle, the opposition starts to fight back. TNM Executive Director Nate Smith posted to his Twitter account the following:

His post was re-tweeted with comment by an account called “A Gay in a Manger”, @liturgicalgay, who claims to teach a “whole unit on the failure of Texas’ ability to self-govern.”

Exactly what kind of person would an anti-Texit internet troll be, who claims to teach against Texas?  A little bit of digging revealed some interesting characteristics.

First off, the account belongs to an individual who is a teacher at a North Dallas area school district.  His district profile says, “I teach 6th grade World Cultures and 6th Grade PACE. I am the GT Specialist at Rice, as well as the SEL Campus Facilitator and Whiz Quiz Coach. I grew up in Dallas and Richardson, and I went to the University of Texas in Austin. After my time at UT Austin, I came back to Dallas and did my teaching certification at University of Texas at Dallas. I am currently finishing my Masters in History at Arizona State University. I look forward to having your students in my class!”

Point number one, those who oppose Texas sovereignty are stereotypically the urban, liberal educated, embedded in the system type folks.  This guy’s got a history degree from UT Austin, and it’s hardly a surprise that someone with such a useful degree from a liberal institution would be opposed to the very idea of Texas’ uniqueness.  With this impractical education, he’s managed to worm his way into the public education system, which again is hardly a bastion of conservatism. Thus far, nothing is surprising about an urban, liberal educated, large-district public school employee having a low opinion of Texas.  We know those people in general work against the values of the majority of Texans. But wait, there’s more!

A little more digging reveals that this fellow is a card-carrying member of the Democratic Socialists of America. While I’d not characterize every single anti-Texit person as some kind of globalist or communist or whatever, this guy seems to be.  If the shoe fits, eh?  Those who oppose Texit aren’t just opposed to us, they’re opposed to even the basic values that America was founded on.

For those familiar with our positions as a political movement, the drive to Texit is also a drive to restore or maintain a republican form of government, which happens to be consistent with what the US used to be.  We’re not “unpatriotic” or even “anti-American” so much as we are against the bloated, expansive, and dysfunctional pile of mess that the current US Federal Government has become.  All we want is government by and for the people, which once upon a time was an American thing.

So who’s anti-Texit?  Liberal urban socialists.  And what are they doing about it?  More than just trolling us on Twitter.  This week’s troll admitted that he “teaches a whole unit” of his socialist, anti-Texan, anti-sovereignty, anti-personal responsibility drivel to YOUR children.  We are not just up against Twitter trolls, but against every liberal influence embedded in the system.

When it comes to the education of children, parents have the first responsibility.  Guard your kids against teachers like this.  Even better, teach your children to love Texas, to love freedom, to love independence and self-governance, to love their family.  Those of us who believe in Texas are opposed by corrosive elements of society, those who would erode our rights, “reform” and expand our government, and limit our freedoms.  When these kinds of folks “out” themselves against us on social media, we don’t even need a straw man to rally the troops.

I guarantee that this week’s troll won’t stop.  We must be twice as active, twice as diligent, twice as firm in our convictions, and fully devoted to Texas. The fact that they’re noticing and fighting back means we’re making progress.   Most of us are content to go our own way and let others go theirs, but the liberal communist trolls won’t rest until every bit of our life is under their control. Let’s go win, because the world will be a worse place if we let them win.