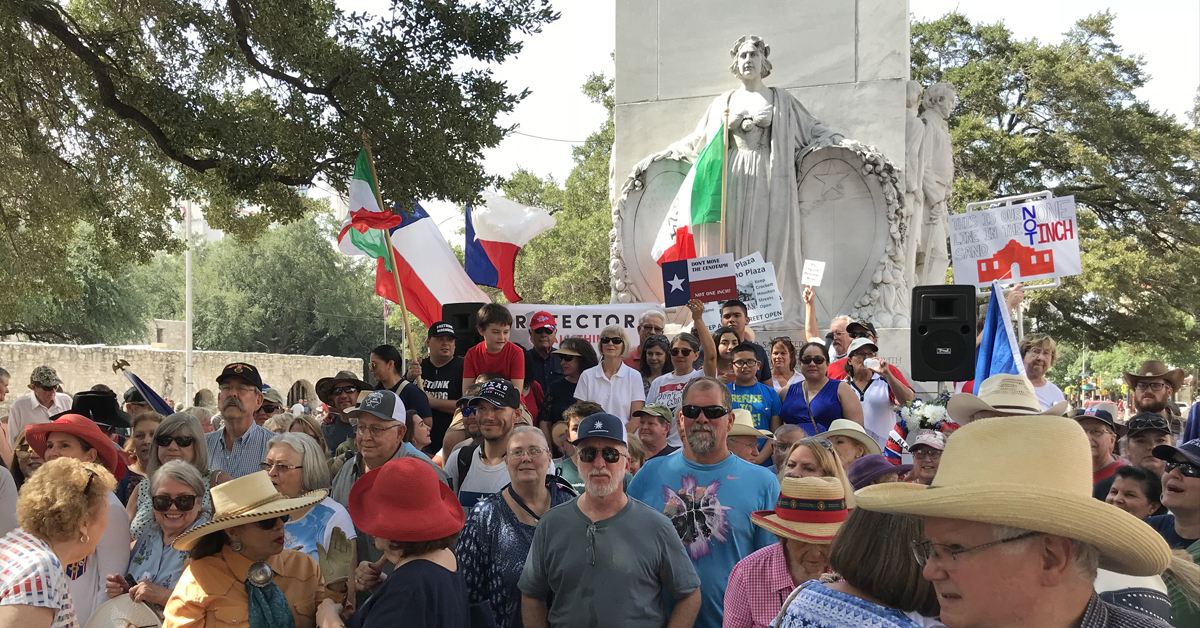 Supporters of the Cenotaph gather for a photo.

Alamo Defender’s Descendants gather for a photo in front of the cenotaph.

Saturday morning, Alamo Plaza was filled with hundreds of protesters, all there to send a message to GLO Commissioner George P. Bush, San Antonio Councilman Roberto Treviño, San Antonio Mayor Ron Nirenberg, and any other self-serving politician that the Texas people want the Alamo cenotaph to stay right where it is.

The event was organized by the Alamo Defenders Descendants, those Texans who are directly related to the original heroes who manned the walls of the old fortress in 1836. Over the course of an hour, supporters stood in front of the cenotaph and made their case that this, the tombstone of the fathers and mothers of Texas ought not be desecrated by moving it from it’s spot in the center of the Alamo footprint to a place outside its walls, outside the new narrative the Reimagine the Alamo planners would like to weave for the new complex. 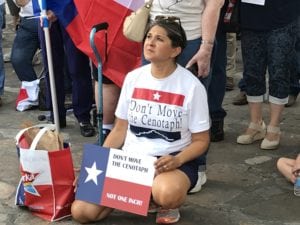 Protester kneels while listening to a speaker.

Lee Spencer White was there to represent the Descendants, along with many fellow sons and daughters of the Alamo, whom all gathered for a group photo during the presentation. “We’re calling out to everyone that is within the sound of our voice,” said Ms. White, “to come and help us! Call your representatives, call the governor, call whomever you need to call, but let them know you’re outraged and you are not going to allow them to move this cenotaph!” 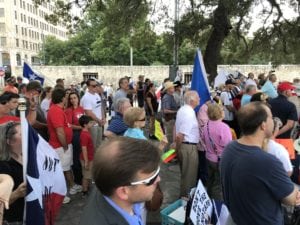 White also went on to rightly point out the nineteenth century battle is the very thing that gives the area meaning, pleading with the crowd that “now they want to forget the Alamo? No! The Alamo Descendants and every Texan wants you to remember the Alamo and wants you to remember the 1836 Battle of the Alamo!” White began to wrap-up her remarks paraphrasing the words of William Barret Travis, who said, “we hope posterity and our country will do our memory justice,” and then led the crowd with chants of “Not one inch!”

Among the other speakers were Ray Myers of the Kaufman County Tea Party and Chair of the GOP State Affairs Committee, who spoke about the Republican party’s recently adopted platform plank #296. The plank calls for the cenotaph to remain where it is, for the pre-eminence of the battle in the site’s presentation, and also the establishment of transparency in finances for the project which has up till now been murky at best. 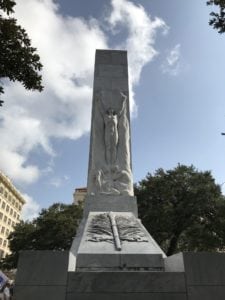 Myers also made sure to introduce Mayor Jim Pruitt from Rockwall and RPT Vice-Chair Alma Perez-Jackson, who were attending in solidarity. He also mentioned the names of other supporters of their cause: SD 2 Senator Bob Hall, SD 24 Senator Dawn Buckingham, SD 12 Senator Jane Nelson, SD 4 Senator Brandon Creighton, and Lieutenant Governor Dan Patrick. “And there’s more,” added Myers, “and we’re organizing right now all over the state to get our state representatives, because what we want to do, we want to stall anything the city of San Antonio does! We want the state legislature to have this, we want it back in their hands, we want the Texas Parks and Wildlife, the Historical Commission, and those people involved, not, NOT, the city of San Antonio!” Myers added, “We have got to divorce the Alamo from the city of San Antonio!”

District 73 Texas Representative Kyle Biedermann was also on hand to make some remarks before the crowd. “This shrine right here is the reason we have independence,” began Kyle in his remarks, “And I’m telling you that I’m standing for Texas. We’re writing letters right now, we’re getting other legislators together so that we can put pressure on the GLO and George P. Bush to be able to keep the cenotaph right here, where it belongs, where it’s been for the last eighty years, where the men died, and where they fell, and where we need to protect this shrine for Texas.” Biedermann ended his comments saying:

Pray for these guys and these women in the legislature to have the courage, like these men here at the Alamo did, to stand for the Alamo and the Cenotaph.