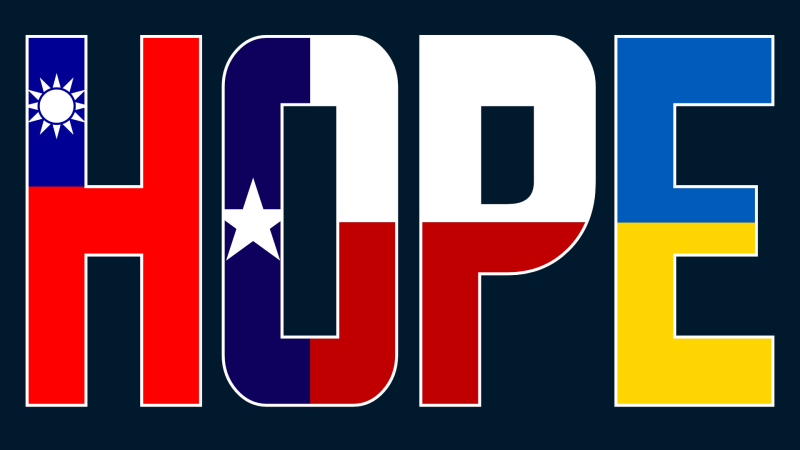 As the world watches the conflict in Ukraine, and as the saber-rattling continues over the recent trip by Nancy Pelosi to Taiwan, many in the US are concerned.  As a Texas nationalist, these events give me hope for a free Texas future.

Texas is a bit famous for its “I don’t care how they do it in California” attitude.  Whether you’re a war hawk or an isolationist or somewhere in between, we still recognize that many of the events on the world stage don’t impact Texas directly.  However, recent world events tip the hand of the US when it comes to how they might respond to an independent Texas.  In case you’ve been an isolationist when it comes to current events, let me recap.

Ukraine was once a part of the USSR, but has been a sovereign nation since 1991.  Since at least 2014, there have been parts of Ukraine trying to split off and go back to Russia.  Russia has encouraged these defections, and has also “annexed” parts of Ukraine.  That’s a nice political word whose synonyms are “conquered” or “stolen” or “took over.”  In February of this year, Russia launched a full scale military invasion, and the conflict is ongoing.  The US has sent billions of dollars in aid and weapons (while our own economy falters), but has otherwise maintained the pretense of not being involved.

Taiwan is an island in the Pacific Ocean between China and Japan.  It was part of the Japanese empire from 1895 to 1945, but was “returned” to China after World War 2.  Since at least 2000, Taiwan has had its own democratic government. Taiwan’s relationship with China continues to evolve. Some call for Taiwanese independence and others for a return to full Chinese rule. The United States has for many years tried to dance the line, treating Taiwan as both sovereign and as a part of China, without fully acknowledging either position.  Should China invade Taiwan, the US has been ambiguous about whether military assistance would be provided to the Taiwanese.  This visit of Speaker Pelosi to Taiwan has been widely viewed as support of the Taiwanese government and opposition to China.  There’s no doubt at all that China perceived the visit as a threat.

So let’s put these current events into perspective when it comes to Texas.  In general, the US has recognized democratic efforts to separate.  While US foreign policy has been subtly supportive of Taiwan while trying not to antagonize China, it’s clear that the US respects Taiwan’s government in many ways.  The US has actively supported Ukraine’s effort to retain its sovereignty, and nobody is saying that Ukraine had no right to leave Russia in the first place or that it should be “returned” to Russian rule.

“Today the world faces a choice between democracy and autocracy,” Mrs. Pelosi said in a meeting with Taiwan’s President Tsai Ing-wen. “America’s determination to preserve democracy here in Taiwan and around the world remains ironclad.”

When Texas begins the Texit process and democratically declares our sovereignty, how will the US respond?  Project Fear folks talk about another Civil War, and spread the idea that we’ll be invaded with tanks and start killing each other.  If this were the case, the US would be taking the role of Russia and China: larger powers using military might to stave off democracy.  While I’m skeptical that the US will take the democratic high road and acknowledge that “all political power is inherent in the people”, world events in Ukraine and Taiwan suggest that the US won’t be invading Texas any time soon.

The United States simply cannot invade a democratically free Texas without becoming one of the global anti-democratic superpowers it so often rails against.  Next time somebody throws “civil war” in your face when you share a vision of a free Texas, remind them of Ukraine and Taiwan.

Ukraine wouldn’t stand a chance against Russia without being well funded.  Texas independence will be slower to develop if the TNM isn’t well funded.  Help us to fight not with tanks, but for our simple right to vote on our own governance.  Help us be as politically independent as we already are in spirit.  Donate now to the Catalyst campaign.

In this article:Taiwan, Texas, Texit, Ukraine