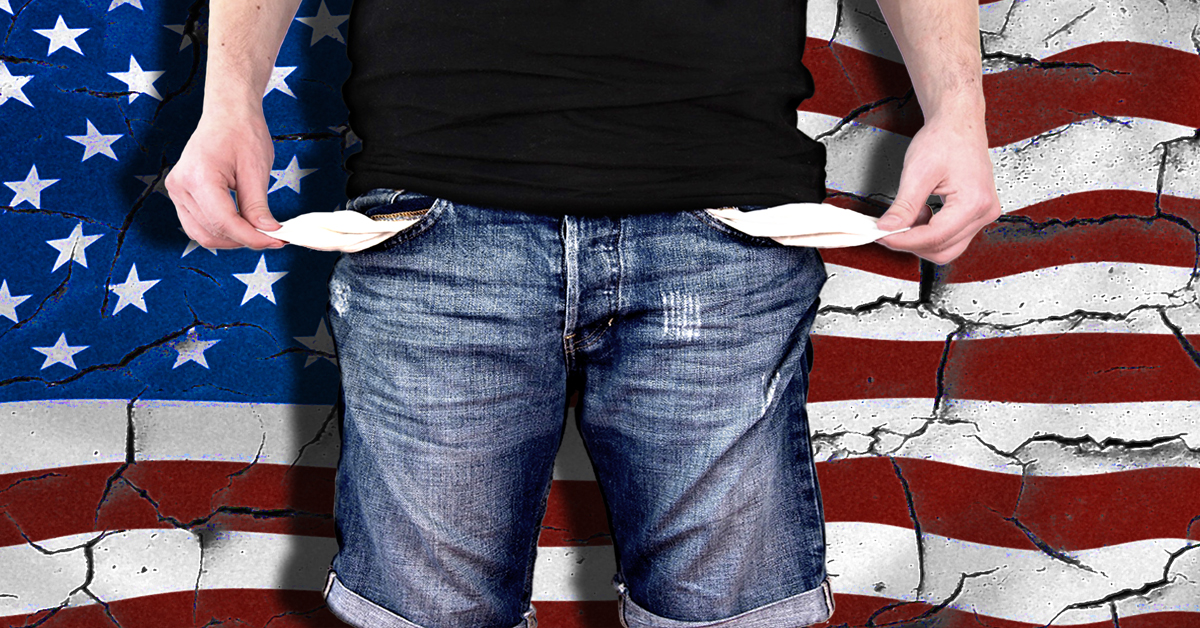 Last Tuesday, September 12th, the U.S.A hit a milestone. No, it’s not time to get out the party hats and confetti! The landmark reached was the federal debt officially hitting $20 trillion in debt. That’s right! No need to round up anymore in discussing how broke the Union is!

Certainly, this news should be greeted with weeping and gnashing of teeth or some other appropriate reaction that signals the enormity of the crisis our Union faces, but what is the reaction from our noble leaders in Washington? Crickets. Apart from a very few debt-hawks in Washington, like Sen. Judd Gregg (R-N.H.) and former Pennsylvania Governor Ed Rendell (D), few are concerned. In a joint statement, the two said:

Indeed! Our debt already surpassed our Gross Domestic Product six years ago, and it is extremely unlikely to stop anytime soon. Much like The Blob, it only consumes and expands.

So, has President Trump declared a national emergency to deal with our enormous debt? Has Pelosi/Schumer and Ryan/McConnell halted all legislative activities to finally deal with what likely represents an existential crisis for the Union? Is there even a general plan, ready to be implemented at some point? Not so much. In fact, Donald Trump and Democrat law-makers may even be working on a way to get rid of the need for authorization to raise the debt-ceiling, permanently.  White House Press Secretary Sarah Huckabee Sanders recently said:

“The President encouraged Congressional leaders to find a more permanent solution to the debt ceiling so the vote is not so frequently politicized.”

And when Trump reportedly offered the idea of getting rid of the process to the Senate Minority Leader, Chuck Schumer (D), his response was, “’Let's do it.’”

Although I shouldn't have to explain why getting rid of what admittedly is a bit of a dog-and-pony show is nonetheless an extraordinarily stupid idea, here it goes. Removing debt-ceiling authorization from the equation means that the debt will likely go up quicker, but also that future increases will be easier and not draw as much public attention as they do now. This is rather like giving the heroin junkie a lifetime supply of smack so he doesn’t have to face shame of his addiction, once he bottoms-out and is stuck between doing something desperate for a fix or going to rehab. All of this hastens the time when we necessarily will pay for Washington’s drug of choice. If not fixed, we could be facing a total economic collapse, the end of the Union as we know it.

This economic Armageddon is especially certain if you include federal unfunded mandates. The debt then rockets to $100 trillion, from programs like Social Security and Medicare… This is such a ridiculously high number, it’s like when Doctor Evil held the world to ransom for "One billion, million, gajillion, fafillion… shababalu… million…yen.” There is no way we can meet that! When that happens, Uncle Sam will either tell American retirees, “Uh, sorry. We can’t give you anything. Our bad. Better get that greeter job at Wal-Mart,” or they could inflate the dollar by printing money like we’ve never done (think of your life-savings only being good to fuel a wood-burning stove, that’s what will happen if we try this!), or they could try to shore-up the deficit by seizing the private assets of Americans on an unprecedented scale. This happened in Greece during their economic meltdown, and in our own history, FDR seized private gold assets. Can you imagine the civil-unrest if Washington just starts taking people’s stuff! “Game over, man! Game over!”

Of course, if you’ve been paying attention, you know that sadly, Washington will never fix this. They’re too dependent on deficit-spending for their political careers; making government all things to all people is great for getting votes, less great for avoiding fiscal disaster! Washington won’t deal with this problem until it’s too late (if it’s not already). However, Texas can take steps to protect itself from this looming disaster that will no doubt send shock-waves throughout the world. If we return to being an independent republic and start taking measures to protect the Texas economy for when the giant hits the ground, we may yet come out of this well enough. However, if we wait on the U.S., well, who can really say how far and total the devastation will be? This is about survival, now! Better get to it! Texit!