Under a cold grey sky a small, but stalwart, group of Texians met in Tyler, Texas Saturday March 4th for the 3rdannual Texas Independence Day celebration to honor and remember those who fought and died for Texas Independence.

After welcoming remarks by Tyler Team Leader Ray Gruetzner and an invocation from Don Teer, Field Director for the TNM, the presentation of the colors was made by the 423 Lightfoot Militia under the command of Captain Eric Rahn. The pledge to the Texas flag was then recited, and the singing of the state anthem an edited version of the Texas Declaration of Independence was read by Sanna Teer. This was then followed by a brief tribute to the defenders of the Alamo by Don Teer. Then, a former history teacher Charles Turner, dressed in period costume, gave a stirring reading of parts of the speech given by Moseley Baker before the battle of San Jacinto. And because Tyler is in Smith County, Ray Gruetzner gave fascinating information about James Smith, a general at San Jacinto, for whom Smith County is named.

This event was held in the downtown courthouse square, adjacent to which are the offices of a local television station. Upon seeing this gathering out their windows a reporter with a TV camera came out, covering much of the ceremony, and interviewing Don Teer. This aired on the 6 o’clock news Saturday night on KLTV channel 7.

Special Thanks to Ward and Linda Lawrence from the metro-plex and Karl Gleim from Grapevine, Regional Field Director for the TNM, who came to lend their support to the celebration. 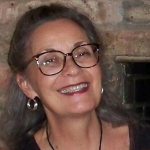 The youngest of four daughters, I am named after my maternal Swedish grandmother and am a second-generation American. Born in Minnesota, my family moved to California when I was 3, where I lived for the next 39 years of my life. By God's grace, I married a native Texan, and we moved to Texas 25 years ago. I graduated from California State University, Chico in 1974 with a degree in History and a minor in French. The next year I earned my lifetime secondary teaching license and taught mostly high school for a total of 7 years after which I homeschooled our kids for 14 years. I speak three foreign languages (French, Spanish, and German) and have taught them as well as teaching English and history.