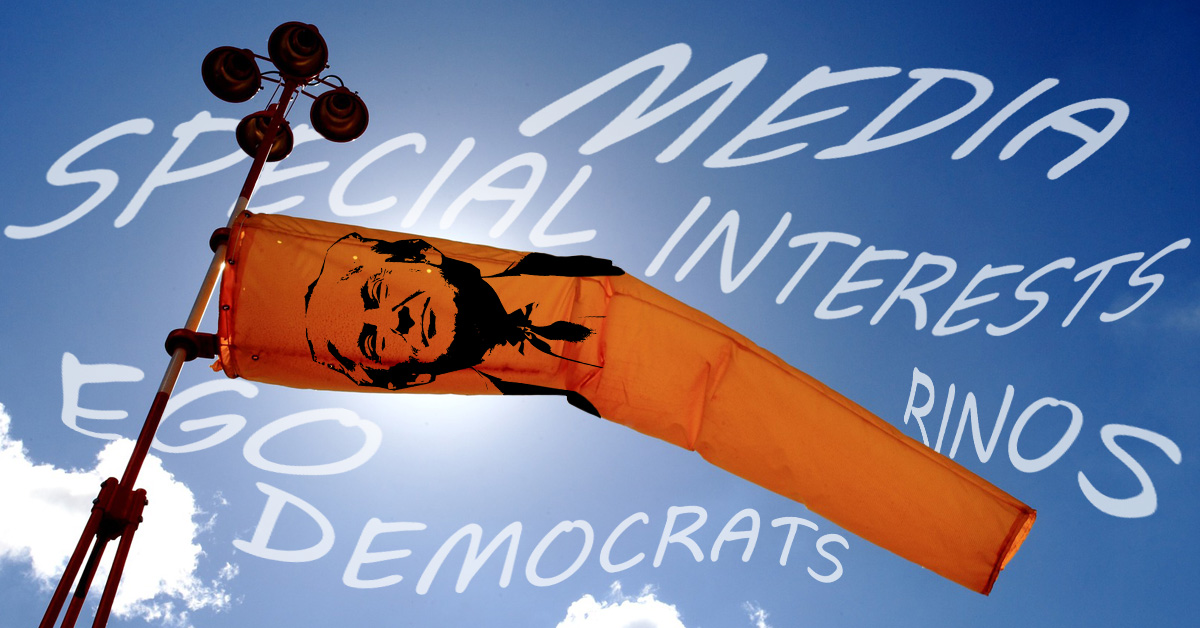 His supporters said he wouldn’t do it. He said he wouldn’t do it. Now, the days of speculation on whether or not Trump was going to head-fake on signing this 2,232-page monstrosity are over, because… HE DID IT! That’s right! Trump’s threat of a veto was absolutely empty. After clearing the House and the Senate yesterday, the 1.3 trillion-dollar omnibus bill that will fund the government only through September was today signed into law by President Trump. Happy days are indeed here again. So, let’s slosh through the Washington swamp together and find out just what we’re in for!

This omnibus represents one of the largest federal spending increases in years. The bill will contain 1.6 billion dollars for the border wall, down from Trump’s prior request of $25 billion; Trump didn’t even get a tenth of what he wanted; so much winning. The Republicans will avoid another government shut-down, and they’re all happy about that! This just goes to show that they lack the stomach for a real fight to save the Union from fiscal catastrophe. But, at least they won’t suffer the political discomfort of taking a stand. Military and domestic spending will be ratcheted up, this will please both Democrats and Republicans. Lastly, this new law will add another $1 Trillion to the national debt, so soon after we just hit $21 Trillon.

Trump did note his general unhappiness about the bill, and vowed, “’I’ll never sign another bill like this again.’” In other words, NEXT TIME, he really, really, REALLY means it! Well, after vowing mere hours before that he would veto this omnibus, only to sign it anyway, I wouldn’t hold your breath, folks!

Trump is bound to lose support over this most recent betrayal of his base. How much he will lose is yet to be determined. And although the hard-core Trump supporters, temporarily incredulous at this latest let-down and (no doubt) trying to figure out how to twist this into a Trump victory, for the rest of us, I think we can reasonably speculate on this event and what to expect from the Trump administration in the future.

First, Trump’s signature is on this bill; he owns it. Though many of his supporters gave him a pass on other spending, like signing a debt ceiling increase, this is unmistakably on Trump to the tune of $1.3 Trillion. Additionally, Trump simply doesn’t consider the debt as something worthy of fighting for. If he does, it’s very strange how he keeps passing up opportunities like this to take a stand on this critical issue. Lastly, Trump will go where he thinks the prevailing winds are blowing, doing to what the most immediate voices to him want. But, rest assured, the voices he’s listening to aren’t coming from his voters.

I think we can safely say that the Trump experiment is a failure, or at least far less effective than many in Texas had hoped it would be. Trump was sold as the one man who could hold the line against the establishment in Washington, but instead he’s many times proved to be someone who will go along with establishment, while complaining about it in the process in an effort to placate his base. It’s time Texas stop putting its faith in Washington saviors, flashy messianic figures that promise different while delivering same. We’d be better off if we’d fix things on our own, as an independent republic, because it’s clear now that Washington will not fix things for us.