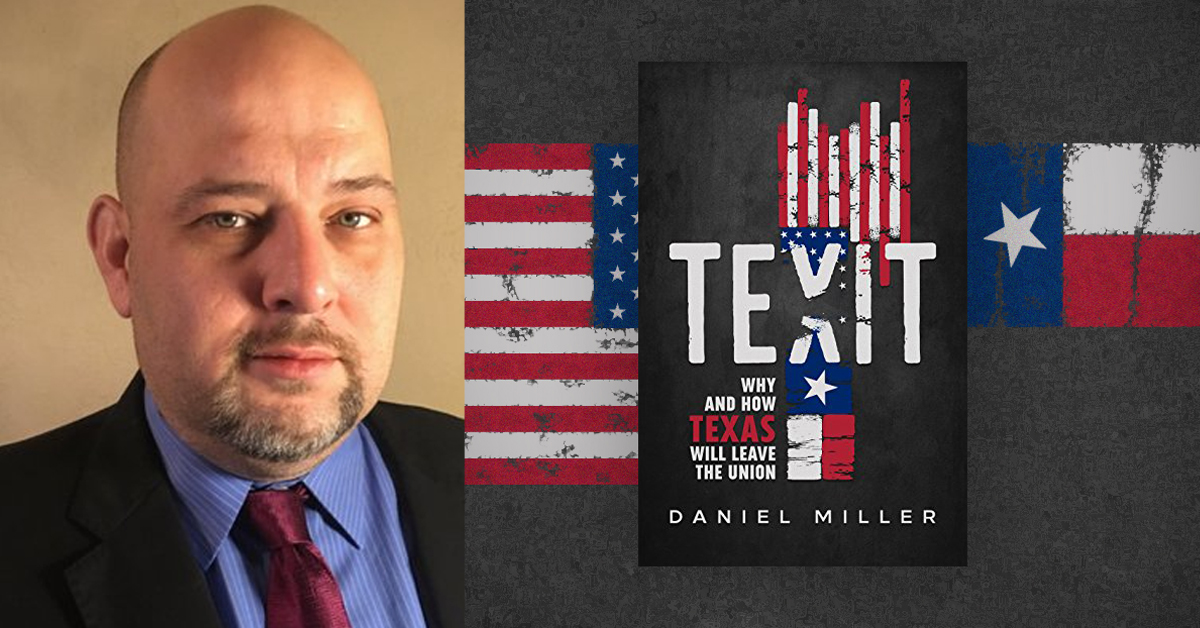 Daniel Miller, President of the Texas Nationalist Movement, made a couple of recent media appearances to promote the April 21st release of his book, Texit: Why and How Texas Will Leave the Union.

On the Gary Rivers Show, a radio talk-show from Canton Ohio, Daniel talked about the movement for Texas independence and how it has grown from single digits to nearing a majority in the Lone Star State. Other topics touched upon were Texas overpaying the Union to the tune of 100-150 billion tax-dollars annually (after federal expenses); the abrogated responsibility of Washington in matters like border security; and the general dismay of Texans “living under 180,000 pages of federal laws, rules, and regulations administered by 440 separate agencies and two and a half million un-elected bureaucrats.”

Rivers questioned Miller about how his movement was at cross-purposes with the promoters of globalism and giant Unions such as the EU and the USA. “Brexit is an example of trying to break away from all that,” said Rivers, “but you see the majority seemingly trying keep that globalization, if you will, moving forward.” To that, Miller responded that the global trend isn’t towards global-ism, but nationalism and self-determination.

Ultimately, that really is the battle, this idea of the nation-state versus this idea, this global amalgam [where] one size fits all. And if you want to get down to the heart of the ideological struggle, that’s it. But again, what you’re seeing, the 54 countries [at the end of WWII that became] 192 countries [by the end of the 20th century], is not a fluke or an aberration… The European Union, right now, is a perfect example of some of the reasons that you’re seeing independence movements, not just in Texas, but in other states. You’ve got the European Union and the bureaucracy in Brussels that is screaming head-long into trying to form a United States of Europe. They look at Washington D.C. and they are envious of the power that has been consolidated and centralized there. And what you’re seeing is, in Europe, your seeing the UK take their power back, you’re beginning to see (I think) a majority of Italians (right now) [that] would like to see Italy leave, [and] you’ve got issues in France where those guys are probably a couple of percentage points in an election away from holding their own referendum [on leaving the EU]. It’s country after country around the world, even in these western-style republics and democracies, that are saying, ‘You know what? We’re the best people to govern ourselves, not some faceless bureaucracy who does not understand us and who does not care for us, in a capital that does not belong to us.’

Miller also made his regular appearance on Raging Elephants Radio during The Apostle Claver Show. In addition to addressing Texit making Amazon‘s best seller list and some other topics, Miller revealed a big reason for his writing Texit the way that he did, as opposed to Line in the Sand, Miller’s previous book on Texas independence.

If Line in the Sand was a justification and vindication for the idea of Texas as a nation, and therefore Texas nationalism, [then Texit] is really a justification and a vindication for all of those people who feel like Texas would be better off as an independent nation and should go that direction, and [it] provides answers to all of this fear-mongering that comes from the opposition. You know, it’s just insane, the kind of garbage that comes out of the opposition.

To this point, Claver approached the topic of the opposition. As the supporters of Texas independence are to be found across party lines, so are its adversaries. Daniel responded:

That’s why, when you go to a Tea Party meeting and you’ve got people who are die-hard Texas nationalists that are ready to see this happen, and you’ve got people that just fight against it, that just spit on the ground every time [they] hear it. This issue cuts across all those traditional dividing lines. Now, that being said, we have to re-frame the opposition in those terms, right? It’s basically those on this side that believe that Texans are good enough to govern Texas, and those that [don’t].

Miller also addressed the arguments that opponents of Texas Nationalism use to try to dissuade their fellow Texans from pursuing an independence strategy for dealing with the unconstitutional excesses of Washington.

… when you take the opposition arguments, they’re really about as flat as you could possibly get. Things like ‘Texas couldn’t make it as an independent nation,’ which is utter garbage; ‘Texas can’t become an independent nation,’ which again is utter garbage; and then you’ve got these other people [who] throw out these random [arguments] (I call it the grab-bag of excuses) to justify their cowardice. The one thing that our side has consistently done, Claver, is we have put up rational, reasonable arguments, not only as to why Texas would be better off, but why we should pursue this course, and, the opposition has skated through this and they have not done the same. What I’m hoping is that this book becomes an opportunity for our side to feel emboldened in their decision to support Texas independence. And, hopefully, they will use what’s contained in this book to force the opposition to up their game, because here’s what we know about the opposition: at this point, I believe that they have thrown the absolute best arguments they’ve got at us and none of them stick. So, if we’re going to move this thing to a vote and we’re going to get to a public debate on it, we’re going to smoke them! We’re going to win this thing… which is probably why they fight tooth-and-nail to ensure that we don’t have a vote on the issue… they can’t win the debate in the public sphere.