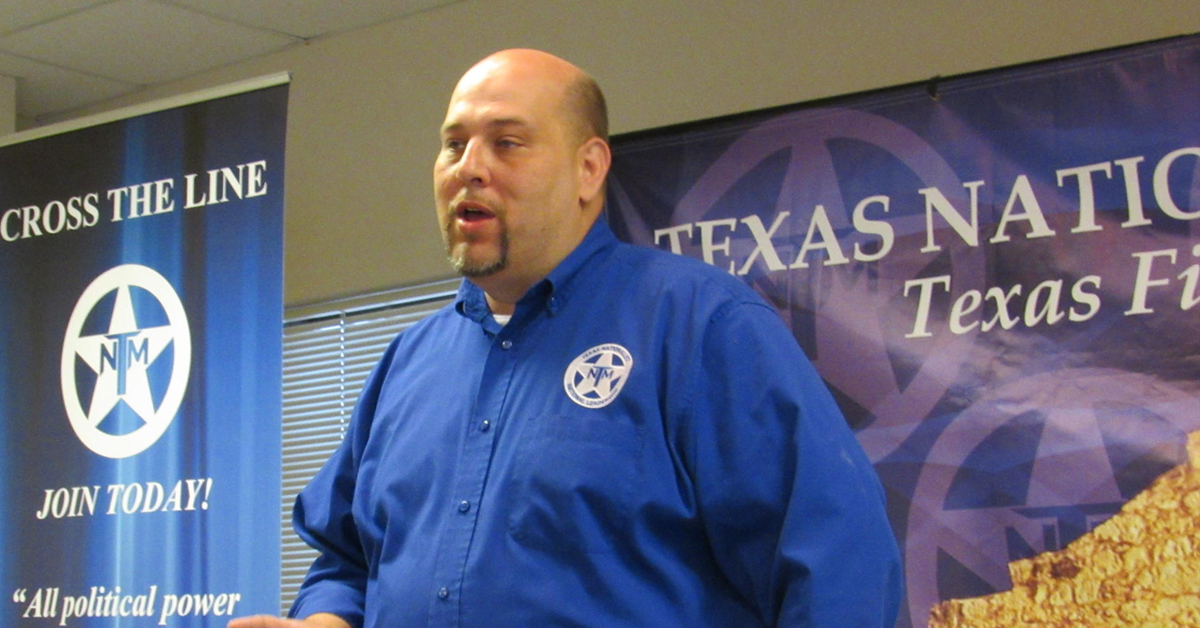 This past Friday, Defiance Press & Publishing, LLC, announced a new book deal with Daniel Miller of the Texas Nationalist Movement.

In announcing this multi-book deal with the TNM President, David Thomas Roberts, Defiance Press President, said of Miller, “‘Daniel Miller has been a leading and articulate expert on Texas independence and is the foremost global thought leader on everyday citizens’ God-given right of self-determination for many years. Independence-minded movements all across the globe, including those involved with Brexit have consulted with Mr. Miller for his unique ability to tap into emerging political trends and to present thoughtfully researched facts.'”

Daniel Miller made time with the Texian Partisan to discuss some of the details of his new publishing relationship and what we can expect of near-future releases.

What can you tell us about your new book deal with Defiance Press & Publishing?

I’m looking forward to working with Defiance Press on the re-release of Line In The Sand and the new book as well. Defiance just signed a major distribution deal which means that both books [Texit and LITS] plus any of the other books that are in the works will reach a much larger audience.

Line In The Sand, seemed a very complete look at the subject of Texas independence. So, what’s Texit going to feature that Line didn’t?

Line In The Sand was an introduction to Texas Nationalism as a concept and was really geared toward helping supporters of Texas independence develop a great understanding of the concept and how it, in a general sense, should impact their actions. It articulated a worldview.

Texit is different. It is the nuts and bolts of Texas independence and, though Texas-focused, is meant to make the idea of Texit accessible to anyone. In it I explain what Texit is, how it has impacted the political process, and get into some fundamentals about Texas relationship with the union. But I also take it further by shooting down some of the most common arguments against Texit, showing a clear path for how it can happen, and what Texas could look like in the aftermath of an exit from the union.

Can you give us an example of an interesting fact or trend that you uncovered in your research for Texit, relating to Texas Independence?

Through the process of working on the book I have realized three inescapable facts: the situation is worse than we thought, the transition out of the union will be easier than we thought, and the opposition arguments to Texit are extremely weak.

As you mentioned, Line In The Sand will also get a re-release through your new publisher. What can you tell us about that project?

When Line In The Sand was first released, it was done on a very short timetable and was self-published under the Texas National Press imprint. Revisiting LITS has been on the radar for years, but as the TNM has grown the time constraints have pushed it down the list. With the re-release on the calendar through Defiance, there is an opportunity to update and expand the content. The new content will extend the discussion about Texas Nationalism and deal with some practical aspects of living as a Texas Nationalist.

Where will these books be available and when will it be released?

Line In The Sand will be back in print before the end of the year. Pre-sales for Texit will start after the 1st of the year with the official release being some time shortly after that. Both books will be available at your local bookstore and for on-line purchase.