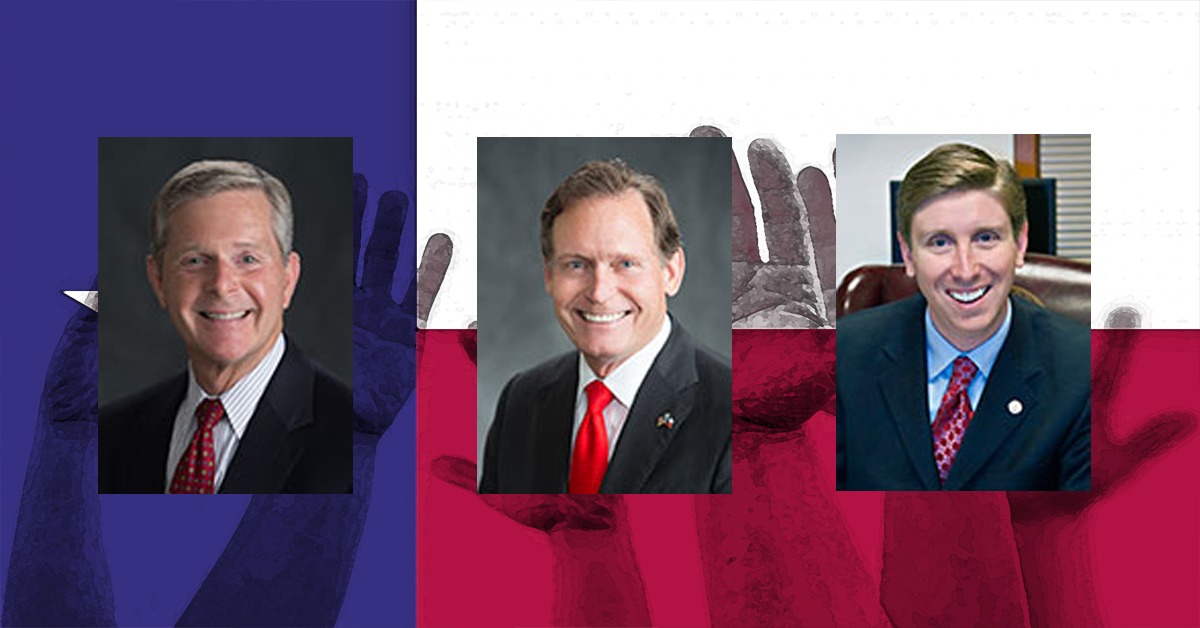 The Texas Tribune is reporting on a handful of candidates who have thrown their hat in the ring to replace outgoing Texas Speaker of the House Joe Straus. While there’s no declared candidate that could be considered an easy choice for Texans who support traditional liberties, not to mention those wanting a referendum on the state’s continued membership in the Union, there yet remain possibilities.

Among the Republican politicians that have declared are Phil King of Weatherford, John Zerwas of Richmond, and Tan Parker of Flower Mound. There is also one declared Democrat, Eric Johnson of Dallas. And although this list may grow or shrink before anybody is selected, by their declaring now, these few have an advantage in that they can “raise and spend money and to talk openly about what they would do if given the keys to the corner office.”

Though the Democrat seems the least likely of the bunch to end up as Speaker in a Republican-controlled House of Representatives, of the three contenders left, here’s some info compiled by Vote Smart:

The first to enter the race for Speaker, Phil King Chairs of a few committees, including Public-Sector Chair for the Task Force on Homeland Security. He receives high marks from a lot of political watchdog organizations; including 88% from Texas Association of Business, 100% from Texas Alliance for Life, and 100% from Texas Conservative Roundtable. He also has in past been endorsed by the Texas Rifle Association, Texas Right to Life, and Texas Association of Business. However, Young Conservatives only give him a 54%. Also, many of you may remember when he held his House Select Committee on State & Federal Power & Responsibility. He was sure to invite speakers from the Convention of the States project to speak, but snubbed Texas independence supporters. TNM supporters shutdown the switchboard at his office in voicing their displeasure.

This six-term serving representative is more of mixed bag when compared to King’s ratings. John Zerwas has served on a few committees, including being named by now departing Speaker Straus as Chairman of the House Appropriations Committee. Texas Eagle Forum gives Zerwas a 72% on his positions, while the American Conservative Union gives him a 36% on the same. Texas Association of Business gives him a cumulative score of 82%, and Texas Alliance for Life has him at 100%. Empower Texans rate him at 44% for Fiscal Responsibility.

Also a six-term congressman, Tan Parker is the chairman of Republican Caucus in the House. Parker serves as Chairman of the House Committee on Investments and Financial Services. He carries a Texas Alliance for Life score of 100%. His American Conservative Union lifetime rating is 78%, but his Eagle Forum Positions rating is 93%. Empower Texans put his Fiscal Responsibility rating at 57%.

I asked TNM President Daniel Miller for his quick take on these contenders. He said the following:

Zerwas would likely be a Joe Straus sequel. Tan Parker would likely be more amenable to our cause than Zerwas, but has previously shown that he is reluctant to take any action that puts him significantly at odds with the political class. Out of the three, TEXIT supporters should expect that King would be the most open to allowing the process to play out regardless of his personal feelings on the issue.

While there still remains some chance that better suited candidates may emerge to vie for the Speaker position, it is unlikely that any will surface that are more politically well-connected than these. While none of this current roster have taken official public stances on Texas independence or whether they at least support Texans having the say on this matter, please feel free to call each of these regarding this or any other matter and then urge your representative to support the best one.