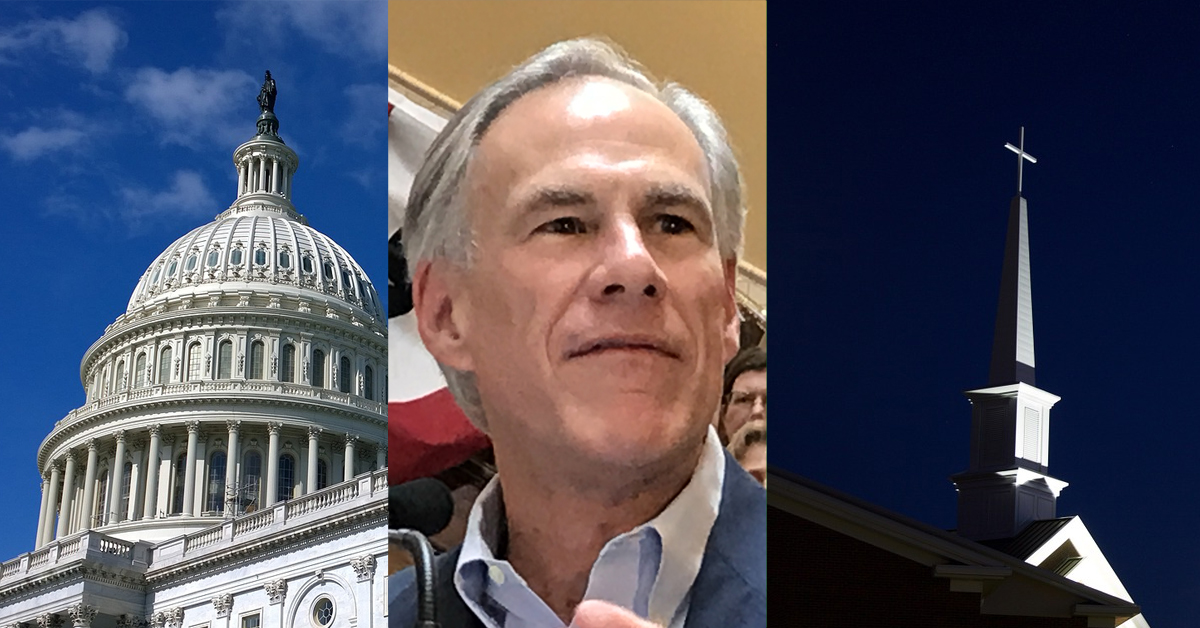 Today, Texas Governor Gregg Abbott spoke to the Southern Baptist Convention in Dallas. His message to the assembled: The United States is in a crisis with some trying to “’silence the faithful and remove God from the public square.”

The AP story that reported on this doesn’t go into specifics. It just sort of leaves that comment hanging out there, bereft of context. Whatever clues left to whom the governor might have been referring to or examples cited to illustrate his point, they were cut to make room for notes on the personal beliefs and purported sexual scandals of the Southern Baptist Church and (lest we overlook them) the few protestors that showed up to add their own commentary to the proceedings. However, the governor has been clear about this topic in the past, such as when he signed into law the Texas Pastor Protection Act (SB 2065) that offered legal protections for clergy and the staff of religious organizations from being forced to perform ceremonies that “’violate a sincerely held religious belief.’” Certainly, the crisis Abbott likely was referring to comes from government, primarily the federal government, and the activists that would use federal power as a cudgel to force their version of morality on all others.

Washington has been particularly antagonistic towards Christians and their beliefs, following what appears to be a global phenomenon of Christian persecution. Under the Obama administration, Washington hit new lows in this regard. Some examples are:

The perpetrators of that last point were aptly labeled the “’speech police,” by then Attorney General Abbott.

Although it’s not just been the federal government attempting to marginalize Christians, such as when a Houston mayor attempted to subpoena the sermons of area pastors in protection of the city’s equal rights ordinance, Washington has in many ways led the way and set the standard for driving Christians from the public sphere.

Few Texas politicians articulate the threat posed by Washington towards the freedom of Texans quite like Gregg Abbott. Speaking out against the federal government, Abbott said:

‘The irony for our generation is that the threat to our Republic doesn’t come just from foreign enemies, it comes, in part, from our very own leaders.’

But, knowing all this, what is the Governor prepared to do to protect the rights of Texas citizens?

We know how much he likes to sue Washington, and we know he can pass the odd bill shielding pastors from being forced to officiate a same-sex wedding or codify laws protecting Christian adoption agency’s right to operate in accordance with their faith, but when the federal judiciary steps in to say, “No! You can’t do that for [reasons],” Texan politicians, including Abbott, will meekly submit.

Additionally, in an effort that, like his litigation labors, expends a lot of political energy but likely will do very little towards solving the immense problem posed by federal overreach, the Governor has put his faith in the Article V Convention of States. The CoV, while mostly well-meaning, is ultimately a risky scheme that (if it ever gets off the ground) could either open-up the Constitution to changes that might make things worse for freedom loving-people or simply be ignored by a government that is already well-practiced in flouting the Constitution and its amendments. Meanwhile, precious time, treasure, and Liberty are lost in pursuing these chancy stratagems.

There’s only one way to ensure that the freedom, including religious freedom, of Texans is protected: emancipation from the Union. The Texas Constitution, recognized by the U.S. Congress, asserts our right to leave the Union (Article 1, sections 1 and 2), and the Ninth and Tenth amendments of COTUS concur. If we would not go along with those that want to guide the Union away from its heritage of Liberty, then the only choice we have is to part ways. Clearly, the regular political solutions don’t work, otherwise Abbott wouldn’t support CoV. However, with independence and Texan’s reputation for valuing limited government and individual Liberty, we wouldn’t have to capitulate to the half of the U.S. population that sees growing governmental powers as a good thing. We could have the reality of Liberty, not just the shallow, perennial election-year promise of change if only Republicans can get their 50 plus one percent.

The Republican Party of Texas Convention is taking place this week in San Antonio. Now would be a opportune time for Abbott to announce that he supports the Texas people having a say in our state’s continued association with the Union, that he supports a referendum on Texas Independence. Just because Donald Trump was elected, that doesn’t mean the federal threat to freedom has been dealt with. Though Trump may not be hostile to Christians as prior presidents, but can you say the same of the entrenched bureaucrats he’s failed to remove? Or, what about the future return to power of politicians that want to continue state-sanctioned religious bigotry? It’s going to happen! If Abbott really cares about religious Liberty in Texas, there is only one chance at safe-guarding it. Either we reclaim full sovereignty as is our right, or we accept that Texas Christians in future will be forced to have to choose between God and the evolving radical notions of a federal super-state that is fully prepared to use force to achieve its aims. Governor Abbott, what are you prepared to do?