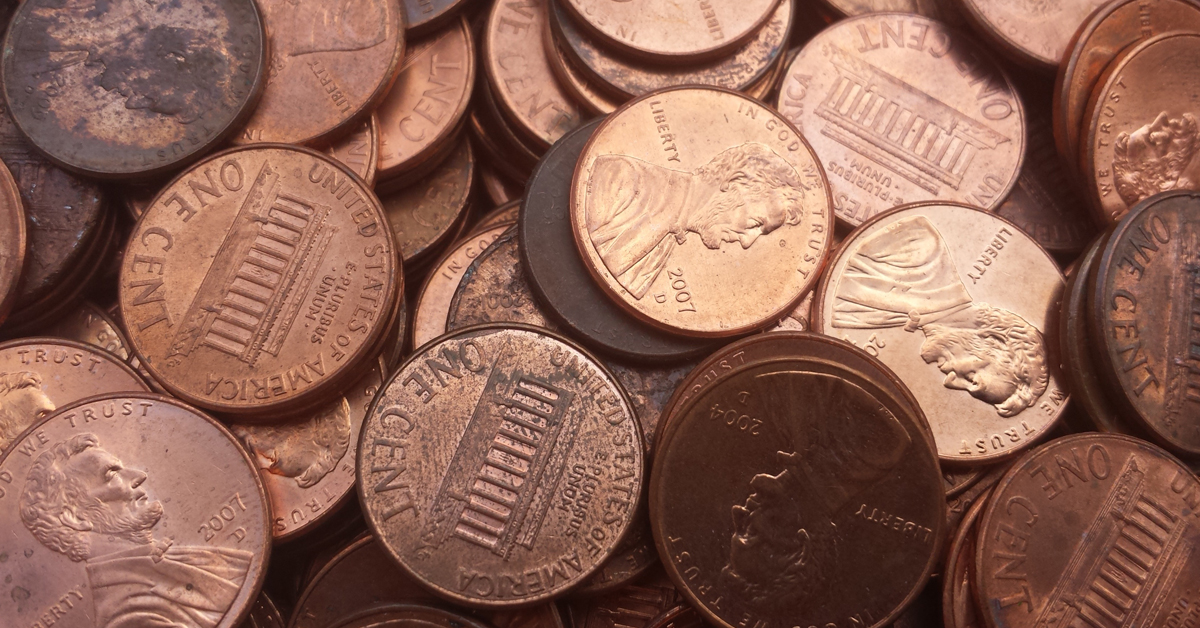 *CORRECTION* The previous version of this story inadvertently moved a decimal point on the amounts. The article has been corrected to reflect the accurate amounts.

How much would you pay for a penny? I know it sounds like a trick question! After all, how could the answer be anything other than one cent? Well, you might be surprised to know that the federal government pays 1.82 cents for every penny it makes, and prices are rising.

According to an article published at CoinNews.net, the U.S. Mint revealed that making coins is more expensive than the actual face value of that coin, and has been for some time. Only the previous year, 1.82 cent penny we referenced cost 1.50 cents. The price of nickels is even worse. Having been high for twelve years now, the current manufacturing cost of a five-cent piece is 6.60 cents.

So, why is it costing so much to make these small denomination coins? Why keep doing it? It’s because they’re being pressed to finance the national debt. The federal reserve is printing/coining money to go towards paying the interest on that 21-22 trillion-dollar chasm that your Washington politicians are always hard at work expanding:

In profit from seigniorage — the difference between the face value and cost of producing circulating -coins, the dime realized $160.5 million while the quarter brought $322.7 million. The Mint transfers seigniorage to the Treasury General Fund to help finance national debt.

I’m sure to many in Washington, printing money to make interest payments on our national debt seems like a smart move, almost as if the U.S. had its own money tree. “It’s OK! We can keep spending! This stuff grows on trees!” However, just as with all things, the more you have, the less they’re worth. For instance, a 1914 Babe Ruth Baltimore News baseball card is worth approximately $500,000. This is in part do to the fame of the player on the card, but a big portion of its value is the card’s rarity. With the Baltimore Ruth card, there are only 10 known to exist in the world, but what would happen to the that card’s value if a dealer were to discover a box of over a thousand such cards? At first, that dealer would make a lot of money selling them in a market that still believed the card was rare… that is until word got out that a cache of those same cards was discovered. Then, the market would adjust to the new value of that card, and the price of the new thousand, plus the Ruth cards previously known to exist, would sink like a stone. Investors who purchased that particular card would lose a lot of money. Although, sentimental value would likely remain high, so I guess there’s that.

Like with the baseball card scenario, a similar thing happens to Federal Reserve Notes when the fed prints new money without taking old bills/coins out of circulation. At first, it’s a boost to the system, but eventually, reality catches up, and the value of all dollars drop, not just the newly printed ones. This means that the next time the government wants to make a debt-interest payment by printing money, they must print even more money than they did the last time. Meanwhile, everybody with savings (bank accounts, investments, the dollar in one’s pocket) sees their purchasing power go down. In fact, since its inception in 1913, Federal Reserve Notes have lost 96% of their value. Or to put it another way, “$1 in 1913 would cost $25.15 in today’s devalued money.” That’s the consequence of our currency’s debasement over time and why inflation is sometimes referred to as a hidden tax: no formal tax was passed into law, but the government took your money, anyway!

If you pay close attention to trends in Washington, you’ll realize that these terrible numbers are not likely to get any better, no matter which party is in charge, no matter who occupies the White House. Washington will just go on and spend, spend, spend; then print, print, print; until we’ve exceeded our capacity to finance our debt. When that happens, we default on our debt, go into hyper-inflation, and the U.S. economy as we’ve known it collapses. Nevertheless, if Texas wants to avoid the economic and social devastation that will no doubt accompany such an event, we can do it. However, this can only happen if we cut our tethers to the Union and abandon the dollar. Like a piggy-bank with a hole in it, the longer we wait to make this decision, the longer we wait to Texit, the more Texas will lose, and lose, and lose.

Oops! There go some more pennies!