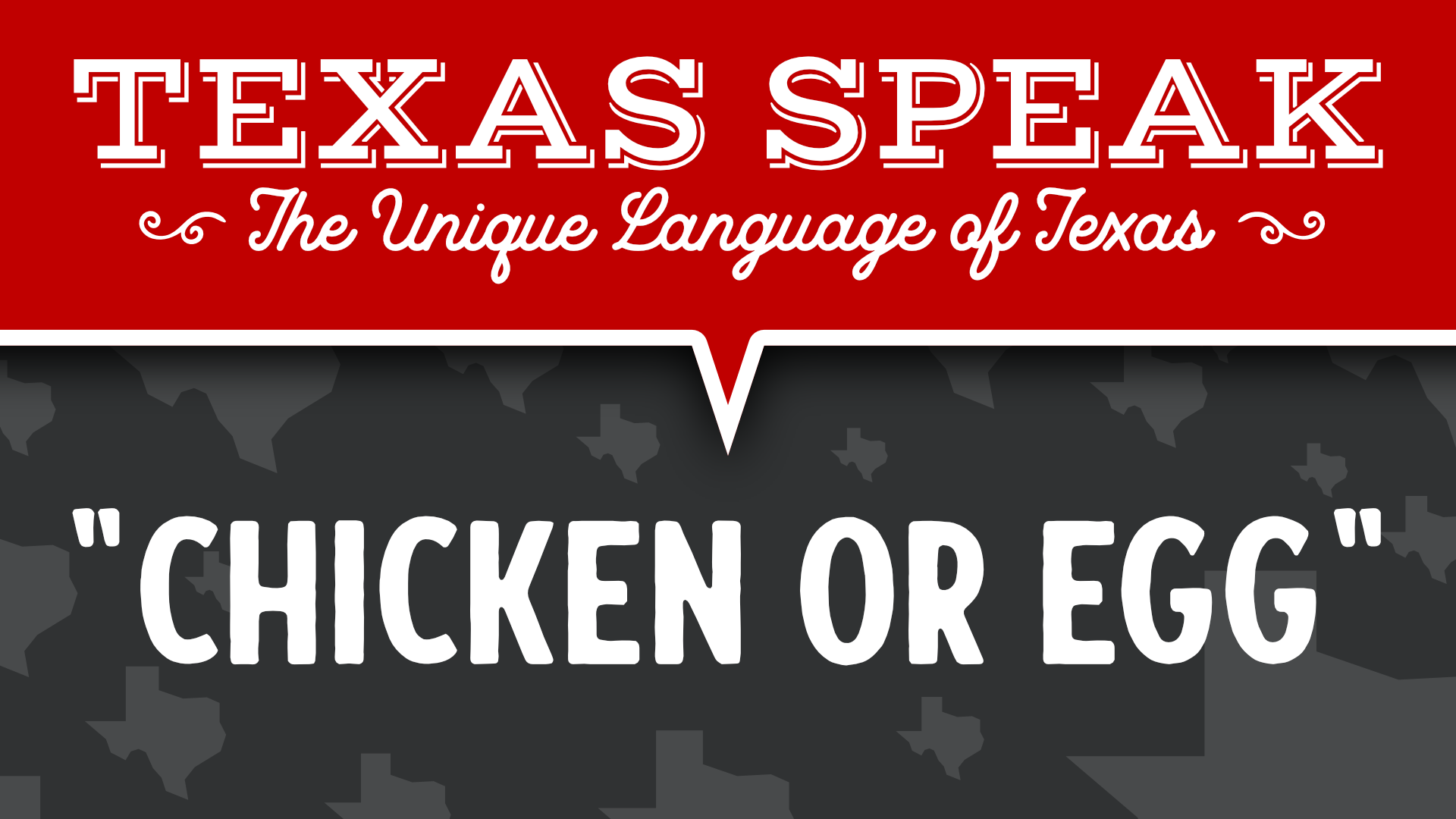 Texans love our folksy metaphors.  Texas Speak breaks down a common metaphor with relation to Texit: Which came first, the chicken or the egg?

The “chicken or the egg” dilemma is a long-standing conundrum.  If the egg came first and then hatched a chicken, where did the egg come from?  If the chicken came first, how did it arrive without first being an egg?  For those of us who believe in God as creator, it doesn’t really matter, as he could have just as well created either one from scratch.  One pastor friend of mine answered this way, “I ordered an egg and a chicken off of Amazon.  I’ll let you know.”

What does all this chicken analysis have to do with Texas?

If you look in any modern reference text, you’ll see Texas described as one of the fifty “states” of the “United States of America.”  Even those of us who want to see Texas stand on its own as an independent nation wouldn’t argue against that position.  As we currently exist, Texas is a subservient member state of a larger union.

So which came first, the union or the states?

For many states like Texas, the union was already in place when we joined.  This is like the chicken laying eggs in the normal course of things.  It’s how it goes, but it doesn’t address the existential question of which originally came first.

True Texans may be quick to point out that we were an independent country before we joined the union.  In our case, we clearly were a nation before we became a state, but we were latecomers.  What was the status of the original member states that formed the union?

Everyone who’s been to American grade school knows that there were 13 “colonies” that initially occupied the land known as America.  Eventually these colonies evolved to have their own local government, even before separation from Britain.  They were organized enough that they sent official delegates to the independence and later constitutional conventions.  Following the Revolutionary War, they formed a confederation, incorporated together under the Articles of Confederation.  Confederated, they were a united group of nation-states that did not give up their individual identities.

It wasn’t long before the need for a clearer unified government structure became evident, and so the “United States” was born under the Constitution.  By ratifying the Constitution, the states established a central government.

Now we are at an inflection point, where the central government has grown beyond its intended limits.  The Federal government now has a hand in every aspect of state government.  They spend our money like they have a gambling addiction.  They set rules for EVERYTHING, but base their rules on the opinions of loud extremists.  They even implicitly threaten violence if we talk about going our own way.  The chicken is killing its own eggs!

But where did it all begin?  The “nation” of the United States of America was formed by the voluntary association of individual “states.”  After that it primarily expanded outside its borders and then formed member states out of the new territory, except in the case of Texas, Hawaii, and perhaps California.  The final point is this: without the pre-existing states, there would be no nation.

We have reached a point in history where the nation has run amok at the expense of the states.  It may even be “running around like a chicken with its head cut off.”  We are also well past the point where we can reclaim the original national structure of a limited central government supported by regionalized state governments.  The behemoth is just too darn big.  So what’s the answer?

Some say that the best way to restore the United States is to call a constitutional convention to further limit the power of the central government.  That sounds good on paper, but will be a challenge because so many states enjoy being subservient.  In my mind the more viable route is for states to reclaim their sovereignty as they see fit. Some states may choose to stay subservient, if it fits their preferences.  Other states may choose to strike out on our own as fully independent states.

The wording of the proposed Texit referendum is carefully chosen: “Should the State of Texas reassert its status as an independent nation?”  We may never solve the dilemma presented by the chicken, but the political question is much easier.  The states came first, and there could be no nation without them.  All we’re asking for is to be again what we should have been all along.

In this article:chicken, featured, Texit