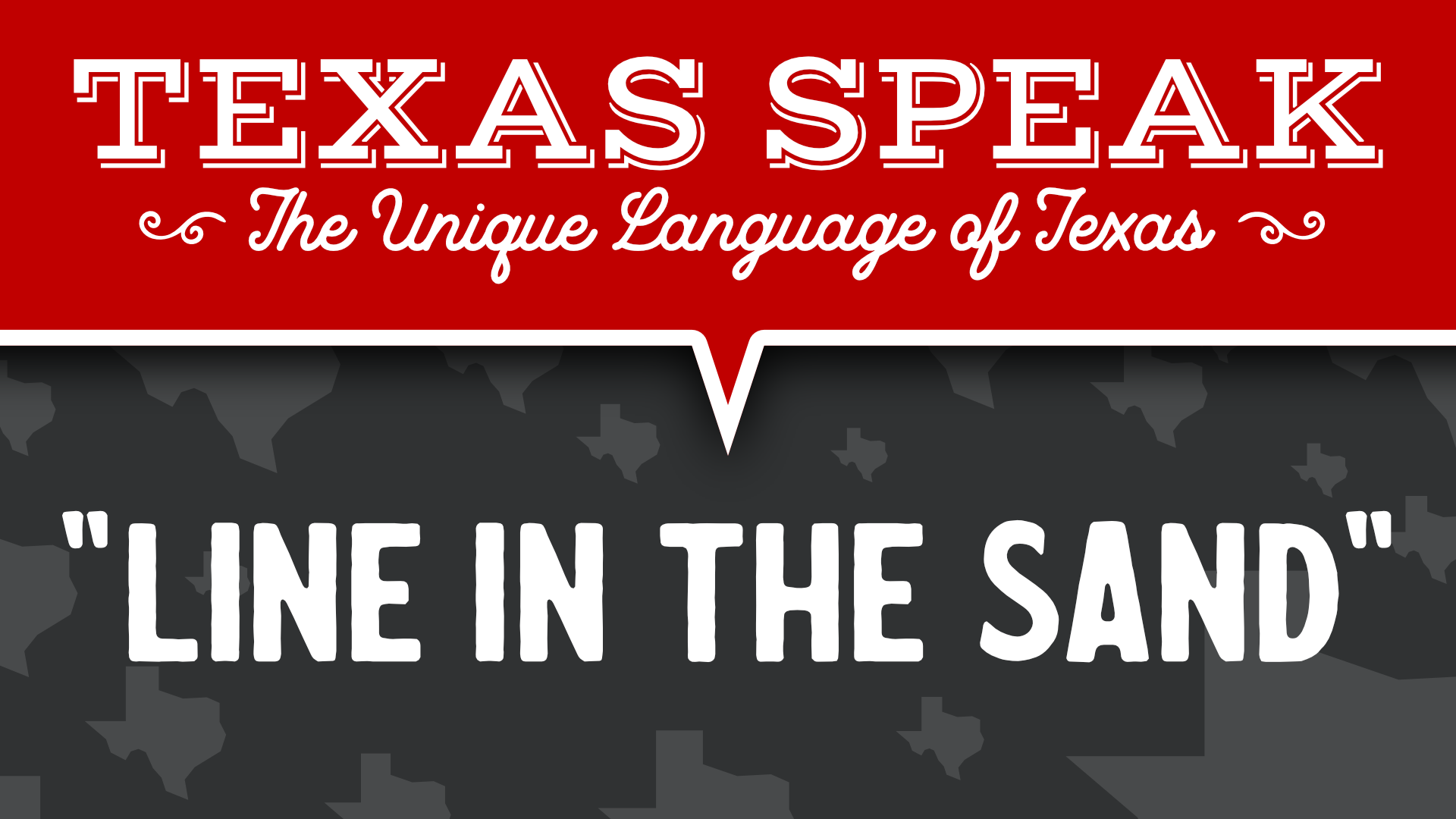 Many Texans remember the Alamo, where Texian defenders gave their lives for Texas liberty.  Before the final battle came a decision point: will you step across the line in the sand?

The Alamo holds a sacred place in the minds and hearts of Texans.  It has been described as “the shrine of Texas liberty,” and if you’ve never been, visitors are asked to remove their hats and maintain silence in the chapel area.  This respect and honor is given to the defenders who gave their lives there on March 6, 1836.  These men from many different backgrounds died for one cause: Texas independence.

Early in the story of the Alamo, Colonel William Travis was ordered to destroy the Alamo fortress and retreat.  He did not, instead choosing to defend the position.  The resulting delay to Santa Anna’s Mexican army gave the rest of the Texian army under Sam Houston the opportunity to muster and regroup.  Many believe that the Texian victory at San Jacinto would not have been possible without the delay that the Alamo battle caused the Mexican army.

In the waning days of the Battle with Santa Anna having the Alamo completely surrounded, Santa Anna sent a messenger to Travis demanding surrender, or else everyone in the compound would be killed. According to the legend, Travis called the Alamo defenders together, explained that defeat was almost certain, and read the letter of surrender.  Having already pledged “Victory or death!,” Travis then reportedly pulled his battle sword and used it to draw a line in the ground of the Alamo.  He asked for volunteers to cross over the line and join him for the battle, understanding their decision would be irreversible. Tapley Holland would be the first over the line. Jim Bowie and Davy Crockett came across as well.  All but one crossed the line, and Moses Rose was the only defender choosing to leave the compound. Travis then responded to Santa Anna’s letter with cannon fire, whereupon Santa Anna replied by playing El Degüello, the Mexican song of death.

With this story as background, the current movement for Texas independence has adopted “line in the sand” language as we consider our work.

TNM president Daniel Miller’s most recent and well known book is Texit: Why and How Texas will Leave the Union.  Before the Texit book was a self-published book called The Line in the Sand. Miller in the first chapter put the situation this way:

While history focuses on the sacrifice at the Alamo on the 13th day, I believe that the most important part of the Battle of the Alamo exists on the 12th day… In it we find the most precious and most overlooked lesson of the Alamo: We have a choice.

We are faced with a Federal government and its minions who have shown contempt for the Constitution and freedoms that we cherish and have set out to economically, politically, and culturally subdue or destroy Texas. The stakes have never been higher.  This battle is for our very right to exist as a free and independent people.

Those of us who believe in Texas and in self determination have chosen to cross the line in the sand.  We know what we’re facing, and while it’s not the death guaranteed to the Alamo defenders by their choice, we know that we will face difficulty.  The entire flow of the US political culture is against us.  We are belittled and slandered, censored and shadow-banned.  We’re derided as extremists when all we really want is peaceful self governance.  We’re ignored by short-sighted people who put their hopes in the politicians of the US system.

To again quote Miller, “Our war will not be fought with rifles and cannon, but by words and ideas and the example we set. We have to be as proficient with words and ideas as soldiers are with their tools.”

Unlike the current US military, our budget isn’t unlimited.  Choices must be made carefully as to spending priorities.  To facilitate the work of the TNM is a project called “The Line in the Sand Society,” a group who have pledged to give their financial support to the cause of Texas.  We believe that Texas independence is inevitable, but that the timeline depends on the willingness of the people of Texas to provide support not just with “words and ideas” but also with our financial resources.

We are not discouraged. We’ve pledged our political efforts to Texas first, and are resolved to “victory or death.”  I hope for Texas independence in this decade.  I expect to see it in my lifetime.  I am certain that my children will one day live in the Republic of Texas.  I have already crossed the line in the sand, and now Texas needs your help. Will you cross the line, or like the lone coward Moses Rose will you simply walk away?

In this article:Line In The Sand, Texit