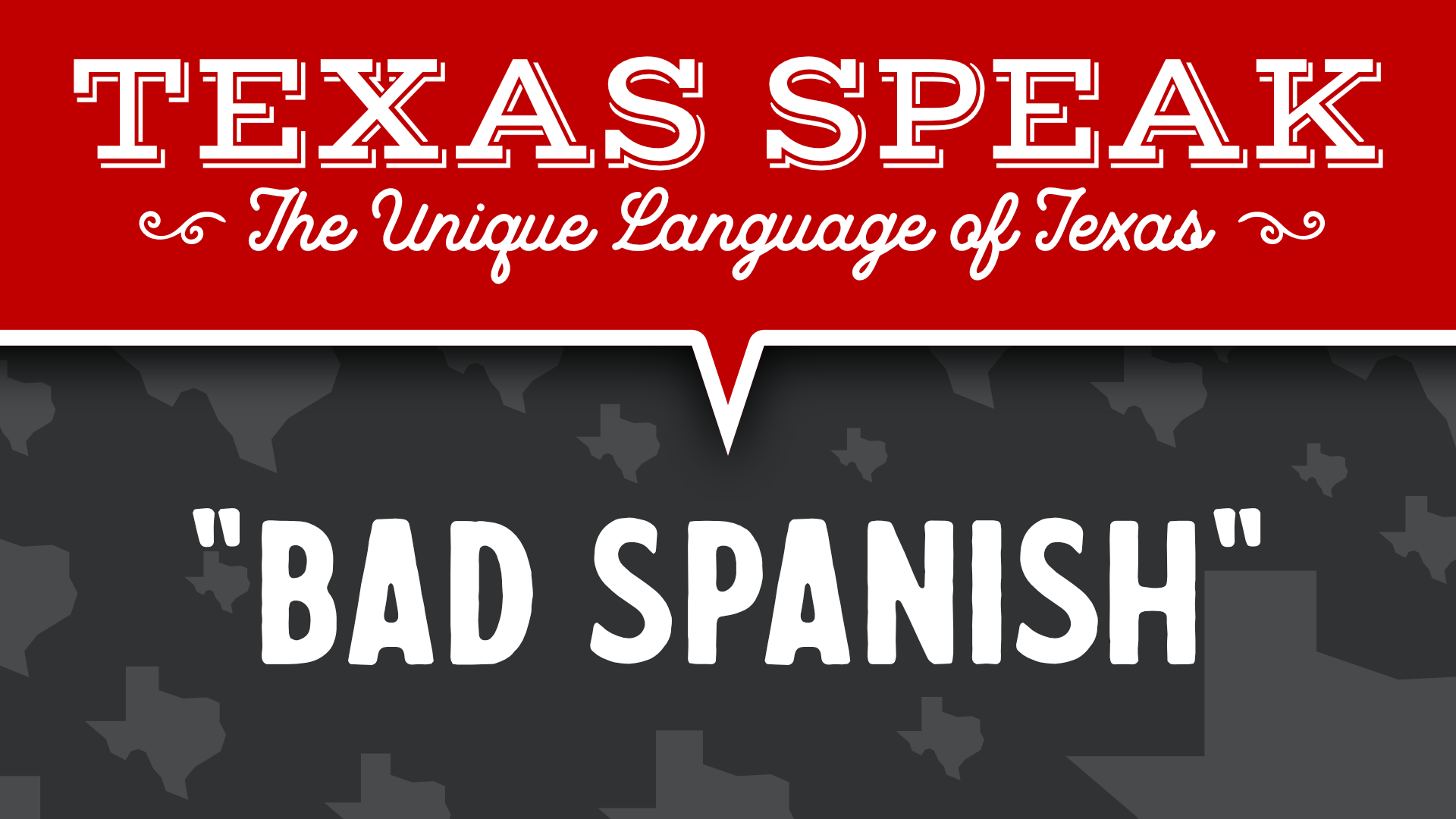 The cultural interplay between Texas and Mexico has been significant to Texas from its very beginning.  Many Texas places have Spanish names, but don’t be tempted to pronounce them the way your Spanish teacher taught you!

Many Texans speak Spanish as a first or second language.  Many more understand a bit of Spanish just from being around.  I fall in this category, with one semester of junior high school Spanish mixed with a lifetime of Texas residency and some influence from my two Hispanic sisters-in-law.

Here’s where things get tricky.  Texas has also been a bit of a melting pot, with folks coming here from all over the world.  We’ve got German, Czech, Polish, and several other ethnic settlement areas, and all these are on top of the consistent flow of northern and eastern Americans during the pioneer years.  My ancestors came here in 1857, from Pennsylvania, for example.  To this day, we still remain a top destination for California transplants.

I’m reminded of a dad joke, “What do you get when you cross an elephant with a rhinoceros?  Elephino!”  For those who don’t speak dad joke, that punch line is pronounced “hell if i know.”  The point of that joke is that when you mix two distinct things, sometimes the result is unrecognizable.  The same goes for Spanish names that come into contact with the variety of Texan backgrounds.

And so a part of Texas language and culture is what I’ll call “bad Spanish.”  It’s easier to explain with examples, but it’s something you’ll need to learn if you want to fit in.  Also, if you find yourself in a crowd who pronounces these in “correct” Spanish, there’s a pretty good chance they didn’t grow up around here.

Amarillo is a perfect example.  Spanish speakers know that as the word for “yellow”, pronounced am-a-REE-yo.  Ask George Straight how it should go, and he’ll give you the correct answer, that he’s headed to Amarillo by morning.  He’ll say AM-a-rill-o, and people from there might even soften the O to make it AM-a-rilla.

Sticking with the color theme, there’s a town in the hill country called Blanco, which is the Spanish word for “white.”  In Spanish, it’s BLAhn-co.  In Texan, it’s Blank-o.  Also in that country you’ll find a river called the Pedernales, named after the flint deposits found there.  That word in Texan is Perd-an-allis, with the R in the first syllable.  What kind of person would pronounce this name so badly?  None other than Lyndon B. Johnson, along with everyone else who grew up in that part of the country.

Out in the hill country is a small town home to Cooper’s BBQ, which is well worth the trip.  That little town’s name is Llano, which in Spanish is yanno because of the double L’s.  If you call it that while you’re there, you’ll stand out like a bull in a heifer pen, because the locals call it Lan-no.

Because of the cultural blending, we do manage to keep some Spanish names in actual Spanish.  Nobody mispronounces San Antonio or Corpus Christi, for example.  San Antonio is in Bexar county, which retains its Spanish pronunciation that sounds like “bear.”  If you put a hard X in there, like in Texit, you’re not saying it right.  There’s no hard X in Mexia either.  Seguin gets the proper pronunciation as well, and is named after a Tejano hero of the Texas Revolution, Juan Seguin.

Armadillos are like Amarillo, with a hard L, not the Spanish Y.  Mosquitoes are pronounced the Spanish way, and I bet they hate them in Mexico just about as much as we do here.  Coyotes are coy-yo-tes in Spanish, but kai-yo-tees in roadrunner cartoons, and often kai-yotes in Texas.

They say “When in Rome, do as the Romans do.”  When in Texas, there’s no rule on “do as the Anglos” or “do as the Tejanos,” so you’ll have to pay attention.  The first time someone local corrects your pronunciation, take their word for it.  Yeah, it’s probably bad Spanish, but that’s just classic Texas speak.