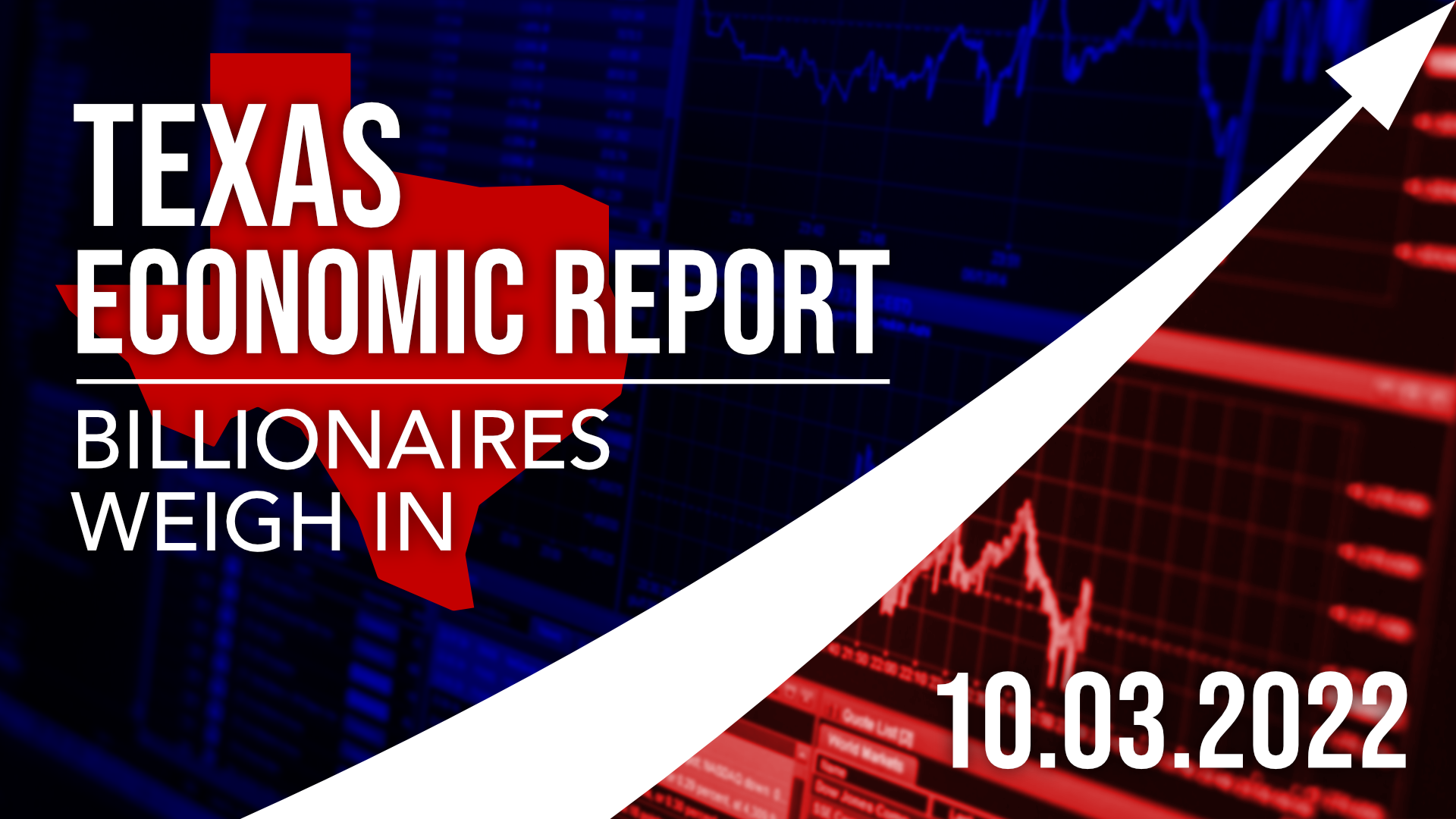 Pundits are divided about the economy, and the data and reports are divided also. Texian Partisan’s Dr. Jack Reynolds brings the highlights and commentary on today’s Texas Economic Report. A few billionaires chime in as well.

BlackRock says markets will get ‘Fed up’ with too much tightening as growth slows, with Powell showing the most resolve since Paul Volcker: “Financial markets may stop tolerating the Federal Reserve’s tightening cycle while rate hikes work their way through the economy, a note from BlackRock said Thursday. . . . But the typical lag between a strong change in monetary policy and effects on the economy will be longer than usual as fiscal stimulus continues to have an impact.”

Musk Joins Prophets of Gloom with Dire Warnings About the Economy: “There are those who believe that by raising interest rates so aggressively for a few months now, the central bank is doing what is necessary to tame rising prices for goods and services. . . . But there are also those who think the Fed has failed and risks, if it continues, causing an even bigger problem than the one it is trying to solve. . . . Elon Musk, the richest man in the world and CEO of Tesla . . . warned in early September that a rate hike of 75 basis points or 0.75% was likely to cause deflation. . . . Deflation is the opposite of inflation. It is characterized by a continuous fall in the general level of prices. It can encourage households to postpone their purchasing decisions as they wait for further price declines, economists say. The consequences can be devastating as overall consumption slumps. Then, companies that can no longer sell their products reduce production and investment. . . . Above all, deflation can cause borrowers’ financial situation to deteriorate. That’s because the real, or inflation-adjusted, cost of debt increases because loan repayments generally aren’t indexed to inflation. So companies are less able to invest and households are less able to buy necessities and consume.”

Gas Prices Start Rising Again Just in Time for Election, Skyrocket to Painful New Heights: “Data released Monday from GasBuddy shows the average price of a gallon of unleaded regular in Portland is up roughly 28 cents from a week ago. . . . Last year, according to Gas Buddy, Portland-area gas prices averaged $3.755 per gallon. . . . [T]he same trend is taking shape across the country, according to AAA.”

Top economist Mohamed El-Erian says the ‘relentless appreciation of the dollar’ is terrible news: “The dollar has ruled the roost in 2022 amid the Federal Reserve’s aggressive interest rate hikes, Europe’s energy crisis, and China’s COVID lockdowns. . . . But economists warn that the dollar’s strength can also be a nightmare for the global economy. . . . On one hand, the strength of the greenback helps to reduce U.S. inflation, but at the same time, when the dollar remains persistently strong, it can bankrupt developing nations as their dollar-denominated debt costs soar.”

NOTE: I do not belive we are done with inflation. Once the midterm is over, the oil supply will slump again, causing oil prices to rise. An increase in the price of oil is a contagion that spreads throughout the economy because of oil’s ubiquitous use.

Popular bond-market recession gauge may go further below zero than any time since Paul Volcker: “One of the bond market’s most popular indicators of approaching U.S. recessions has the potential to post its most negative readings since the early 1980s reign of former Fed Chairman Paul Volcker.[T]he spread between 2- and 10-year Treasury yields could get to around minus 130 basis points if the Fed ends its rate-hike cycle with a 4.75% fed-funds rate target. . . . The spread could even invert beyond minus 150 basis points if the terminal fed-funds rate is above 5%, they said. That compares with Tuesday’s level of minus 34 basis points.”

Billionaire investor Ken Griffin says a US recession is inevitable – and the Fed needs to stick to its guns to reset inflation: “Hedge fund billionaire Ken Griffin has warned the US will go into recession — the only question is when and how painful it will be. . . . Griffin said Wednesday that economic downturn now looks inevitable for the US. . . . (He) called on the Fed to continue with its aggressive rate hikes to make sure it keeps a lid on what is seen as a normal rate of inflation. If not, persistently high levels could lead to higher wage demands, which feed into a wage-price spiral where repeated pay rises spur prices higher.”

A US housing recession has arrived and it could lead to a 20% decline in home prices and Fed interest rate cuts by 2023, chief economist says: “A recession in the US housing market has already arrived as potential home buyers step away from deals due to soaring mortgage rates. . . . [N]ear-7% mortgage rates have led to a steep drop in demand for homes. . . . The higher mortgage rates, which have doubled over the past year, mean the typical monthly payment has surged to $2,600 per month from $1,550 just a few months ago. . . . Mortgage applications are down about 30% year-to-date and home sale transactions are beginning to show signs of slowing down. At the same time, supply for new homes for sale is likely to rise as housing starts and building permits surged to 16-year highs at the start of the year. . . . The combination of falling demand and rising supply means home prices are likely to turn considerably lower.”

JPMorgan Model Says Stocks in Free Fall Mean Recession Is a Lock: “The US stock market is sending a crystal clear signal on its view of the economy — a recession is all but imminent. . . . That’s the verdict from a trading model created by JPMorgan Chase & Co. strategists. It’s now saying the S&P 500’s 6.5% rout since the Federal Reserve turned extremely hawkish last week implies a 92% probability of US recession, up from 51% in August.”

A Stagflation Genie Roars Out of the Bottle: “In September 2020, (Peter Navarro) drafted an internal White House memo that warned the pandemic was eroding the resiliency of global supply chains and transportation networks and thereby driving up production costs worldwide. . . . Today, an even more virulent stagflation than (he) envisioned is taking deep root in the US and global economies. Far too much of that stagflation is being propelled by policy mistakes that reflect a fundamental misunderstanding of the economic woes now facing the globe. . . . [W]hile the U.S. unemployment rate remains low in the United States, inflation is running at a 40-year high and negative GDP growth rates over the last two quarters place the U.S. in a technical recession. Reflecting this stagflation, both stock and bond prices are in a downward trend; and financial markets are shedding trillions of dollars of investor wealth. . . . Central banks are ‘one trick Keynesian ponies’ that can only solve one part of the stagflation equation at any one time. If the U.S. Federal Reserve wants to fight recession, it lowers interest rates; but that Keynesian ‘fix’ only fuels more inflation. If the Fed fights inflation as it has committed to do, it raises interest rates but that exacerbates recession. . . . a primary contributor to today’s stagflation is a retreat by the United States from Trump’s policy of strategic energy dominance. Biden’s war on fossil fuels through policies such as cancelled pipelines and moratorium on oil drilling on government lands has quickly turned the U.S. from a net exporter of petroleum to just one more supplicant in world markets at the mercy of the OPEC cartel and rogue nations.”

The cost of taming inflation could be 3 million lost jobs: “Federal Reserve Chair Jerome Powell has warned that getting inflation under control will involve “some pain to households and businesses.” What kind of pain is he talking about. . . . So far, the pain has been plunging stock values and higher borrowing costs for homes, cars, credit-card purchases and business investments. But the toll could also include a surge in unemployment, and all the strains that go along with it—which typically harms lower-income workers most of all. . . . BlackRock thinks GDP would have to contract by about 2 percentage points to cut inflation as quickly as the Fed is aiming to do. That would put about 3 million Americans out of work, in BlackRock’s estimate. . . . prolonged inflation . . . go[es] way beyond the high gasoline prices that unnerved drivers during the summer. The worst may be the decline in living standards that comes as wages fail to keep up with rising prices, especially the cost of essentials. . . . Average wages are growing 4.4%, but with inflation at 8.3%, real wages are declining by 3.9%. That’s unsustainable.”