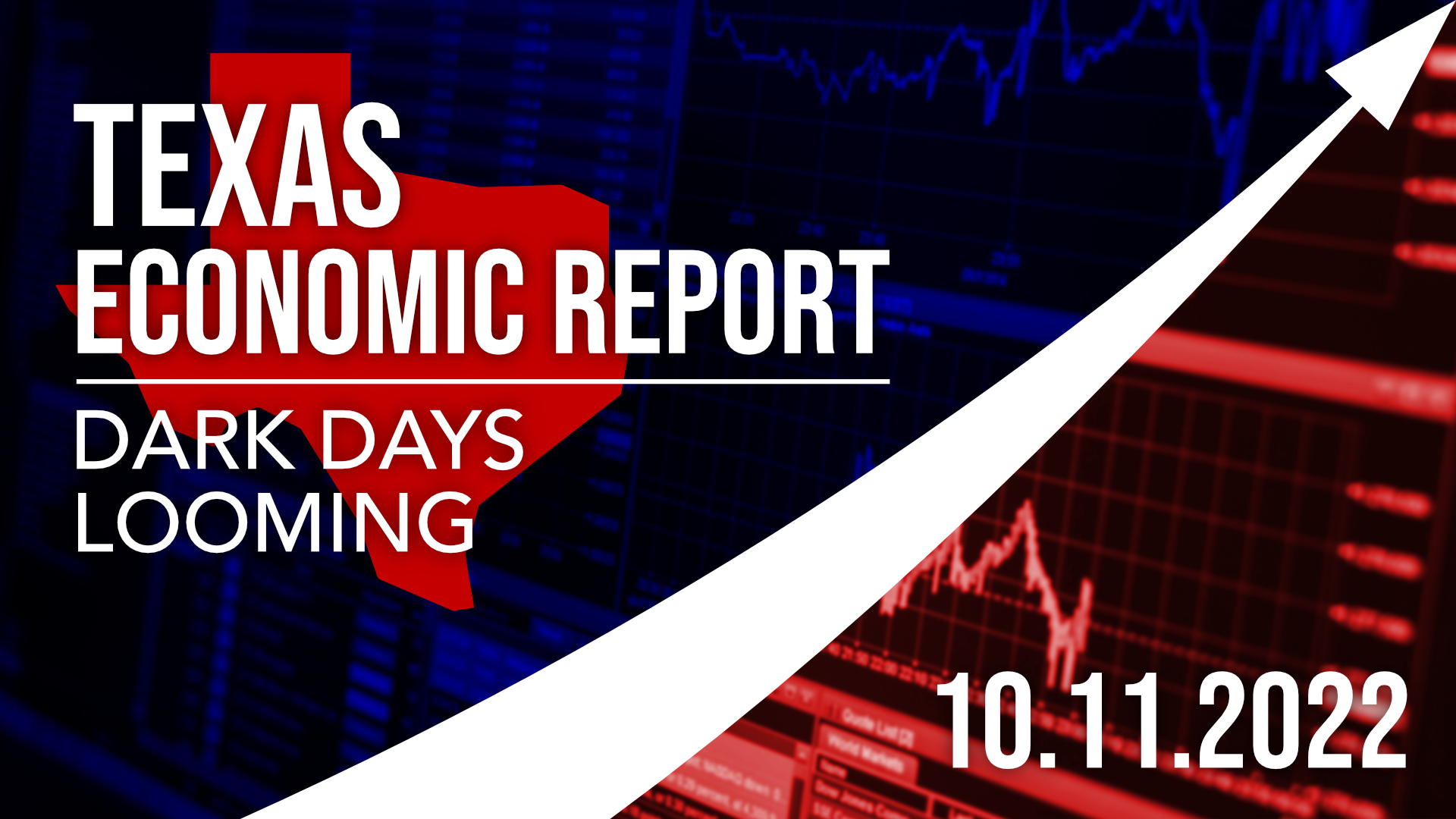 In this week’s Texas Economic Report from Dr. Jack Reynolds, the signs continue to point to dark economic times ahead.

‘The economy will crumble’: Another billionaire investor calls on the Fed to pull back its interest rate hikes: “The CEO of investment firm Starwood Capital Group said Tuesday . . . that the Fed should pause after its latest rate hikes to see how they’re impacting the economy. . . . Billionaire and veteran investor Carl Icahn . . . recently restated his ominous outlook that the economy will worsen before inflation cools down. . . . Elsewhere, World Bank president David Malpass said that economies worldwide could fall into recession given the high interest rates impacting economic recovery globally. . . . Jeremy Siegel, a Wharton professor and well-known economist, said the Fed missed its window by not tightening monetary policy before inflation began escalating.”

‘The picture for 2023 has darkened considerably’: The World Trade Organization says that global trade will decrease sharply next year as countries face a ‘multipronged crisis:’ “Russia invaded Ukraine, disrupting global energy markets and sending the price of fuel soaring. Inflation has affected countries around the world, whose central banks are now scrambling to bring prices down by hiking interest rates. And supply chains are trickling back to pre-pandemic levels, although in parts of Europe regional factors continue to pose trouble. . . Global trade will significantly slow down next year . . heightening the risk of recession, the World Trade Organization cautioned on Wednesday. . . . The WTO has revised its earlier forecasted growth rate of global goods trade for 2023 from 3.4% to 1%. . . . The WTO also projected that global economic growth in 2023 will be around 2.3%, down from their earlier estimate of 3.3% that it predicted earlier this year.”

NOTE: I stop drinking the economic kool-aide of “free” trade a while back. Free trade is a myth – there is nothing free about trading with significantly less developed nations.

‘It didn’t need to be like this’: Top economist Mohamed El-Erian says the Fed was too slow responding to inflation and now the risk of a recession is ‘uncomfortably high:’ “The Fed has responded to sky-high U.S. inflation with a series of aggressive interest rate hikes to slow down the economy, beginning in late March. But in doing so, the odds of an economic downturn hitting the U.S. have also been creeping upwards, with bankers and economists alike saying that a recession within the next year is now a likely outcome. . . And the worst thing about the possible upcoming recession might be that it could have been avoided had the Federal Reserve acted sooner, according to Mohamed El-Erian, president of Queens’ College at Cambridge University.”

‘A major problem’: The US is now a record $31 trillion in debt, made worse by rising interest rates — and this is who holds the IOUs: “The gross national debt in America has hit new heights, surpassing $31 trillion, according to a U.S. treasury report released this week. . . . [I]t basically boils down to more than $93,000 of debt for every person in the country, according to the Peter G. Peterson Foundation. . . . “And with the dramatic rise in interest rates over the past few months — the Fed funds rate is currently between 3% and 3.35% — the national debt will be growing at a rate that makes it even harder to ignore. . . . Currently, more than $965 million is spent every day just in interest on the national debt. The Peterson Foundation estimates that will triple over the next decade, making it the fastest-growing item in the federal budget. . . . And when the government owes a lot, it makes it harder for corporations to borrow money.”

‘Bond King’ Bill Gross warns the Fed against raising interest rates – saying central bank hikes could spark a credit crunch and global depression: “Bill Gross has warned the Federal Reserve and its central-bank peers against hiking interest rates much higher, as they risk causing a painful credit crunch and tanking the global economy. . . . The Fed has lifted its benchmark rate from virtually nothing to a range of 3% and 3.25% in recent months, and signaled rates could reach as high as 4.9% in 2023. . . . Gross, whose nickname is the ‘Bond King’ . . . argued the US economy is too indebted to handle materially tighter financial conditions, especially with a raft of growth headwinds buffeting other nations. . . . Gross is worried that if the Fed hikes rates significantly, lending will become so unappealing and debt so onerous in the highly levered US economy that credit dries up. . . . Coupled with a slew of overseas challenges, the outcome could be a global economic disaster.”

Keystone Pipeline cancellation was ‘mistake,’ economist under Obama, Clinton admits — and slowing oil permits, ‘being hostile’ toward natural gas were errors, too: “Larry Summers — who served as treasury secretary under former President Bill Clinton and was the director of the National Economic Council under former President Barack Obama — admitted during a Friday interview on Wall Street Week that cancelling the Keystone Pipeline was a ‘mistake’ and that slowing oil permits and ‘being hostile as a country’ toward natural gas were errors as well.”

Economy-Crippling Strike Back on the Table After Rail Union Rejects Deal Biden Bragged About Brokering: “The third largest railroad union rejected its deal with freight railroads Monday — renewing the possibility of a strike that could cripple the economy. . . . About 56 percent of the track maintenance workers represented by the Brotherhood of Maintenance of Way Employes Division union who voted were opposed to the five-year contract even though it included 24 percent raises and $5,000 in bonuses. . . . Four other railroad unions have approved their agreements with the freight railroads that include BNSF, Union Pacific, Kansas City Southern, CSX and Norfolk Southern, but all 12 unions that represent a total of 115,000 workers must ratify their contracts to prevent a strike.”