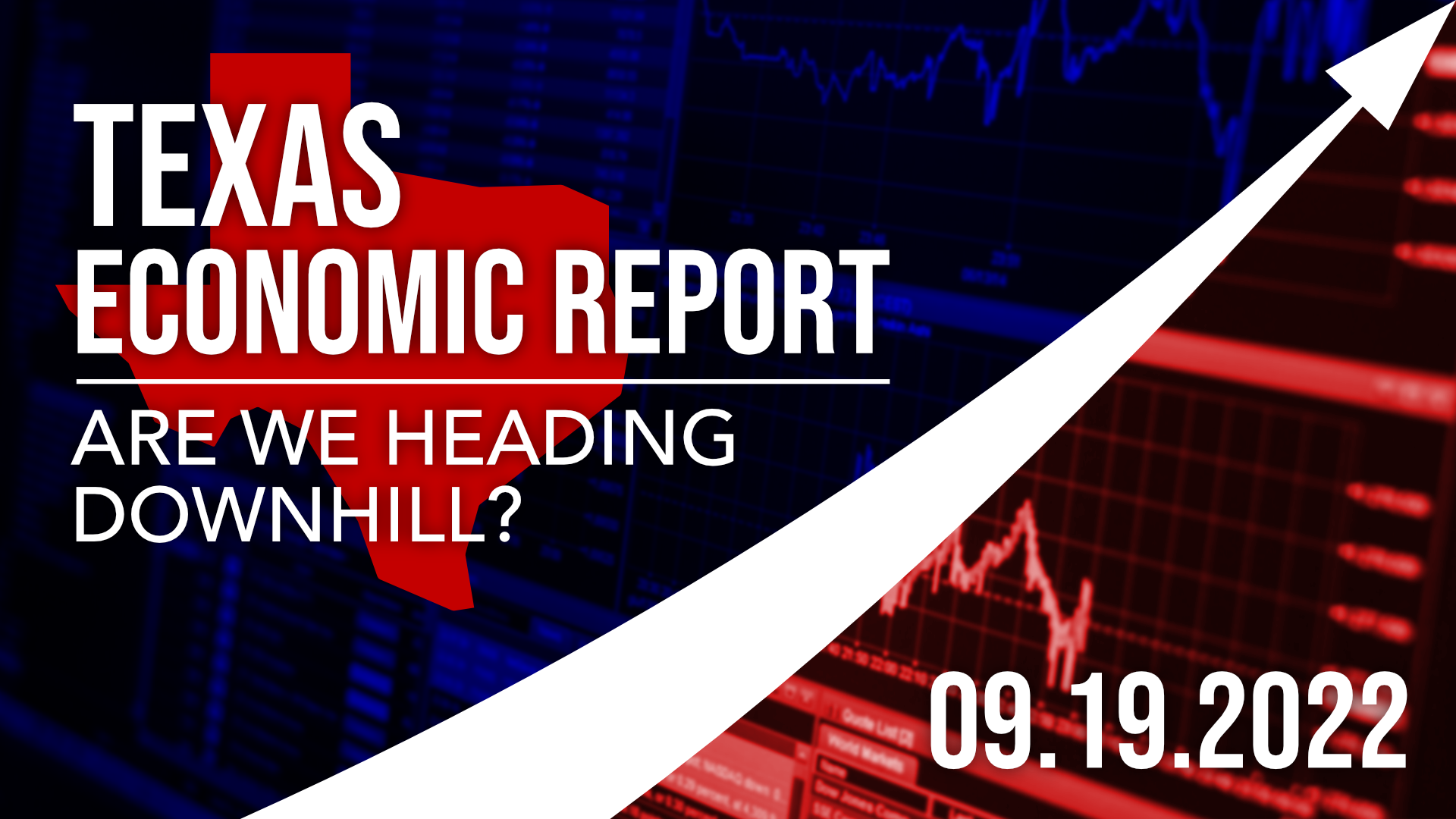 Here are some highlights of economic news this past week, carefully curated and quickly summarized with a quote or two, with links to more information. The Texas economy is directly impacted by events in the US and world economies.

ESG’s Toxic Brand Isn’t Salvageable: “American consumers and investors [are] souring on Environment, Social, and Governance (ESG) principles being injected into both the public and private sectors, its loudest defenders say a rebrand will salvage its toxic image. . . . Notably, the scoring mechanism associated with ESG is flawed and corresponds to imminent economic decline. Wherever high scores are found, countries have experienced great political instability and corresponding financial ruin.”

Stock Market Crash: Worst Day in Over Two Years: “The stock market closed on Tuesday afternoon after its worst day since June 2020 following the morning’s release of Consumer Price Index data that showed prices continued to rise in August to a 12-month 8.3 percent while core inflation doubled its expected increase for last month. . . . By market close the S&P 500 was down more than 4.3 percent to 3,932.69, the Dow Jones Industrial Average had shed 1,276.37 points — or 3.94 percent — and the Nasdaq Composite was down more than 5 percent to 11,633.57. . . . Still-soaring inflation and Wall Street’s worst day since the early months of COVID-19 chaos before Biden even took office, however, did not stop the president from taking a victory lap on Tuesday afternoon — as Katie reported here — in what is either a horribly timed event or just an expression of his disregard for the pain his policies have caused Americans.”

The biggest Fed rate hike in 40 years? It could be coming this week.: “The persistence of high inflation might force the Federal Reserve to resort to the biggest increase in a key U.S. interest rate in more than 40 years. . . . After another dismal U.S. inflation report, economists at the brokerage Nomura Securities on Tuesday became the first on Wall Street to predict a full-percentage-point increase in the Fed’s benchmark short-term rate.”

First major Wall Street bank to call a U.S. recession says ‘the pessimists will sadly prevail:’ “Deutsche Bank, which became the first major Wall Street bank to forecast a U.S. recession in April, is running through its list of pros and cons for why the world’s largest economy might achieve a soft landing — and coming to the conclusion that it won’t. . . . Tuesday’s release of the August consumer-price index . . . showed inflation spreading more broadly despite falling gasoline prices. One of the biggest reasons is that the full impact of the Federal Reserve’s string of interest rate hikes won’t be felt for a year, or until 2023.”

Roth: The Fed is going to #*$! it up: “The hopes that the Fed could achieve what investors call a “soft landing” — bringing down inflation without tanking the economy in the process — were never realistic and now are broadly waning.”

Top Obama Economist Warns Financial Pain Under Biden Will Get Far Worse: “[T]op Obama economist Steve Rattner is warning things are going to get much worse for American families. . . . Because inflation is still raging out of control with no end in sight, the Federal Reserve will continue to be aggressive on interest rate increases. The housing market is already bearing the brunt as mortgages continues to get more expensive.”

Start Saving: Gas Prices Expected To Surge Again This Winter: “Secretary Yellen was asked if Americans were ready for higher gas prices yet again. She admitted in the interview that it was a risk and did nothing to calm fears that a massive spike in oil prices may hit the entire country this winter. If that is to be the case, Americans may suffer even more than they already have due to the ever-rising price of gasoline.”

Housing affordability hits worst level in 37 years: “It now takes 35.51% of the median household income to make a principal and interest payment on the median home with 20% down, according to figures mortgage technology and data provider Black Knight shared with Yahoo Money. . . . That’s the highest payment-to-income ratio since October 1985 when it took 36.01% of household income to make that payment. Just in January, that ratio was 24.61%, below the long-term average of 25.1%. . . . The figures come after the rate on the 30-year fixed mortgage hit 5.89% last week — its highest point in over a decade and over 2.5 percentage points higher than the start of this year.”

The Fed is ‘attacking the economy with a sledge hammer’ and more interest rate hikes will cause a recession and housing crash, billionaire investor Barry Sternlicht says: “Billionaire real estate investor Barry Sternlicht thinks the Fed needs to slow down its interest rate hike trajectory as the economy shows signs of pressing hard on the brakes. . . . Sternlicht said he believes that an economic recession could be imminent, potentially arriving in the fourth quarter if it hasn’t already arrived. . . . Specifically, he sees a lot of weakness forming in the housing market as mortgage rates soar to their highest levels since 2008. A continuation of interest rate hikes from the Fed, which often quickly flows into higher mortgage rates, will likely cause a “major crash” in the housing market, according to Sternlicht, who added that home prices are already beginning to decline.”

NOTE: These uber wealthy folks don’t mind inflation as much as the rest of us because they have the disposable income to absorb these higher prices, but when Fed policy starts causing their assets (like real estate) to lose value, they balk.

JPMorgan CEO Warns U.S. Is Headed Toward Something Worse Than a Recession: “For months now, economic experts have been sounding warnings about an upcoming recession. The Federal Reserve has been quite aggressive with interest rate hikes this year in an effort to slow the pace of inflation. The Fed’s goal is to make borrowing expensive enough that consumer spending starts to decline, thereby helping to close the gap between supply and demand that caused the cost of goods to soar. . . . [Although] JPMorgan CEO Jamie Dimon . . . acknowledges that the U.S. economy is strong right now, he’s still convinced conditions are apt to deteriorate. He also said there’s a 20% to 30% chance of facing . . . a full-blown depression — a really prolonged period of economic decline.”

Not Seen Since 2008 – Major Real Estate Company Releases Biden Economy Forecast: “According to Fox Business, the average home is now selling for less than its list price. Real estate company Redfin said another housing financial crisis is unlikely. . . . Mortgage rates are now above 6 percent for the first time in 14 years, according to The New York Times.”

Top economist Mohamed El-Erian says Europe recession is a “done deal,” with U.S. still at risk: “Dwindling gas supplies in Europe and soaring energy bills as a consequence of Russia’s invasion of Ukraine are likely to lead to a recession on the continent [of Europe], according to . . .  Mohamed El-Erian, president of Queen’s College, Cambridge, and chief economic adviser and chairman of emerging-markets investment firm Gramercy.

“In 2020, Russian imports accounted for a quarter of the European Union’s energy use, according to the World Economic Forum, and just last year the country supplied 40% of the continent’s natural gas. But with Russian president Vladimir Putin willing to turn off the gas taps to Europe in response to Western sanctions, Europe is now in a substantially more vulnerable position.

“The gas crunch could see European energy bills next year surge by as much as $2 trillion, Goldman Sachs warned last week. With European stocks spiraling and the EU’s central bank hiking interest rates at the highest pace on record, a recession on the continent may have already begun.”

Editor’s note: This is the first in a weekly series of economic reports by Jack Reynolds, PhD. He is an economist who teaches at the college level, and is on the advisory board of the Texas Nationalist Movement. A similar report will publish weekly on Mondays or Tuesdays.