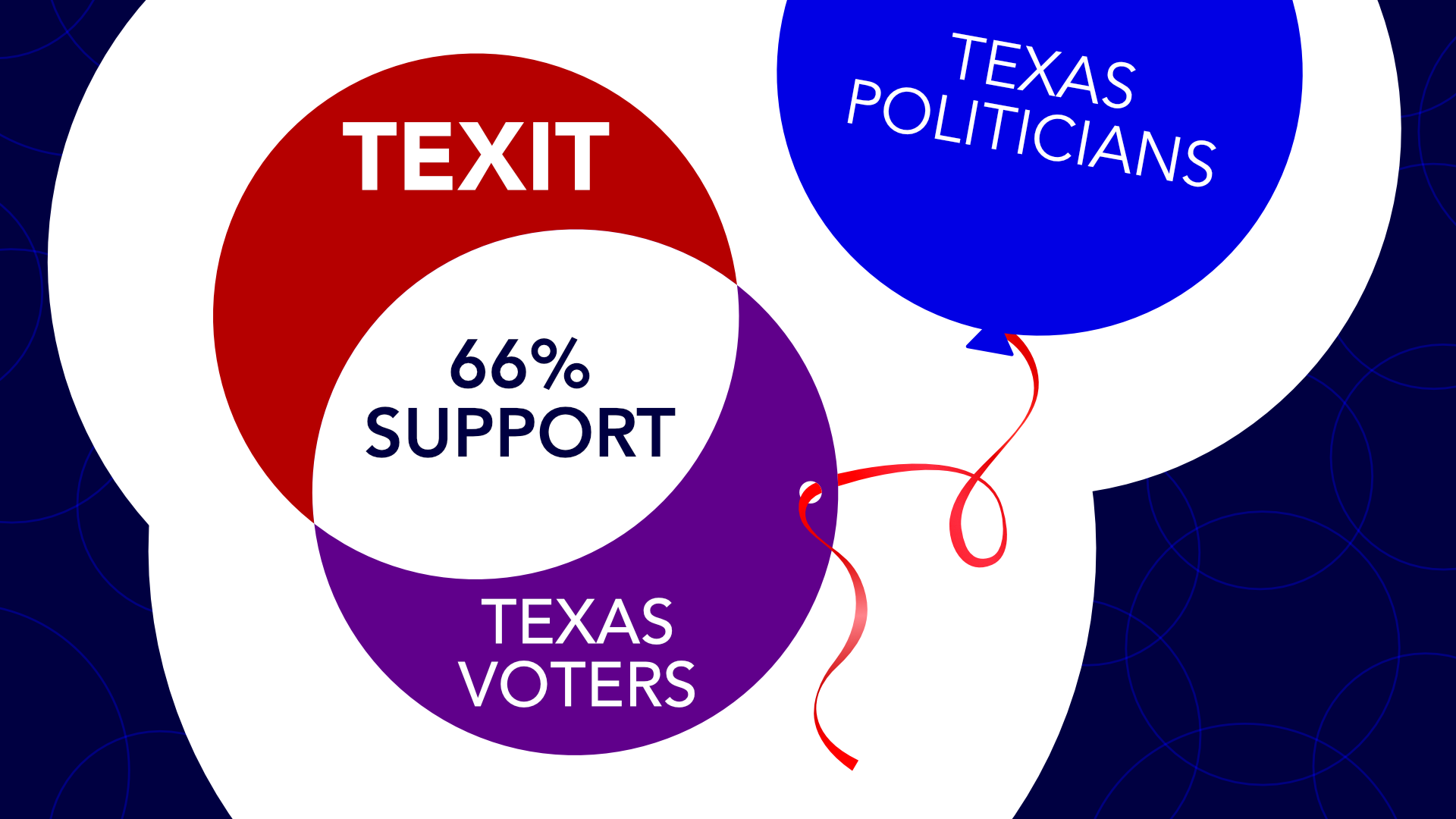 One of the favorite arguments of the establishment is that Texit supporters are “fringe,” and our movement doesn’t represent a majority.  New polling by SurveyUSA shows the opposite: voters support Texit now!

The poll was conducted in eight states, including Texas, Alabama, Mississippi, Louisiana, South Carolina, Florida, New Hampshire, and Hawaii. There were 4375 respondents, with 625 from each state surveyed.  The sample was reflective of overall average US demographics, with proportional representation according to race, gender, and political affiliation.

Let’s break down the Texas results.  The first substantial question was, “Would you support Texas peacefully becoming an independent country along with other conservative states? Or not?”

Support for exiting the union polled highest in Texas, with regular voters showing 66% support and voters who vote only in presidential elections showing 63%.  Even when non-voters were included, support for withdrawing from the union peacefully was 60%.  Other states’ results were lower, with some states opposed to their state becoming an independent country.

When the Texas results were broken down by party affiliation, 77% of Republicans supported withdrawal.  54% of Democrats and 53% of Independents were in favor of withdrawal.  Is leaving the union a “right-wing” or “fringe” position?  Clearly not, as it has majority support among all segments of Texans, regardless of political affiliation.

When asked how the US should respond to a state secession, 60% of respondents said “let the state go.”  Only 7% suggested a military attack, with the rest (33%) favoring economic and political sanctions. Who thinks a state leaving the union should result in civil war?  Only 7% of the people.  Self determination is supported by the majority.  Civil war fear mongering is a “fringe” position.

When it comes to the question of holding a vote, framed this way, “Would you support or oppose the idea of Texas holding a vote to find out whether voters want Texas to peacefully separate from the US?” the results are consistent with previous questions.  50% support a referendum, with 30% opposed and 21% undecided.  Among those who expressed an opinion, 67% support a vote.  Support is higher among respondents who vote in every election (61%) than among non-voters (33%).  Support for a vote is higher among Republicans (67%) than among Democrats (37%) or Independents (48%).  Opposition to letting the people vote is lowest among Republicans (16%), highest among Democrats (46%) and in between for independents (28%).

In summary, a majority of people who vote or have an opinion support a referendum on the issue.  No political affiliation has a majority who say they are strongly opposed or somewhat opposed to the vote.  Who is it that is opposed to having an independence referendum?  Only the elected political class.  The people want the opportunity.

The people of Texas seem far more respectful of self-determination than modern-day pundits and the political class.  Rants and misinformation about secession saturate the 24-hour news cycle.  The establishment consistently fails to acknowledge the existence of a movement the size of the Texas Nationalist Movement (TNM).  Even so, there is clear majority support for Texit.  Our arguments are legal, our reasoning sound, and our strategy purely democratic.

We aren’t a “fringe minority” or “extremists.”  We’re just regular folks who want a vote on self-determination. This is why the TNM has made all of the facts about Texit available at texitnow.org and why the book TEXIT: Why And How Texas Will Leave The Union has been a four-time bestseller.

So how do we move the politicians and pundits in line with popular opinion?  How do we get the vote we want and the independence we deserve?  One thing for certain about politicians, they go the way the wind blows.  When the people of Texas begin to move, when majority support swells and grows, the politicians will jump on the bandwagon.  Only you can help us make that happen by donating to our efforts, becoming a member, or registering your support.  We are making history, right now. Help us write the next chapter of Texas history.