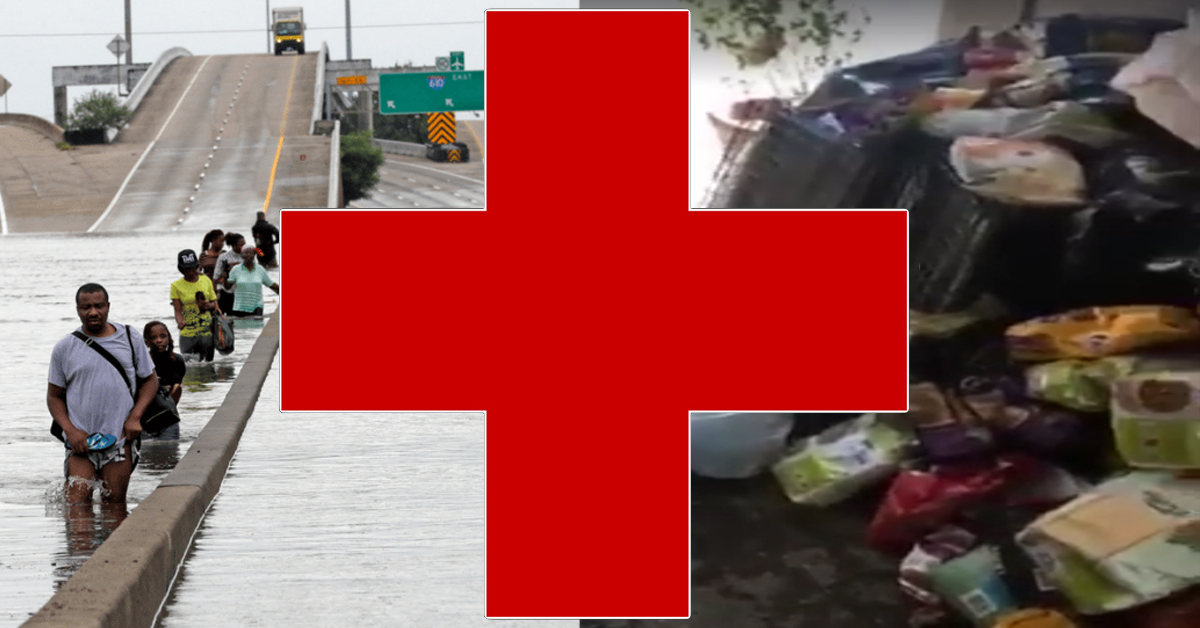 Texas is not yet a month from the initial devastation of Hurricane Harvey, and Texas charities and other government assistance groups are still out there diligently trying to meet the need that still exists. However, there is one charity, whose name has surfaced now and again in the media and social networking sites as doing less than most: the American Red Cross. You may have heard how Texas officials, like Houston City Councilman Dave Martin, have actually appealed to donors to not give to Red Cross, citing incompetence in their response efforts, for staying in 5-star hotels on the donor’s dime (something Red Cross has admitted), or because of their lack of transparency in how they spend donations, such as exhibited in their now infamous Haiti effort. You might remember how Red Cross received “half a billion dollars” to spend on Haitian earthquake victims, but only had 6 permanent homes to show for it after five years. Well, in the wake of Hurricane Harvey, not surprisingly, we have another disaster where Red Cross’ performance is receiving mixed reviews, at best.

The first thing you must understand about the American Red Cross is it’s almost a government agency. In the words of the Red Cross themselves, they say they are an independent entity that is organized and exists as a nonprofit, tax-exempt, charitable institution pursuant to a charter granted to us by the United States Congress. Unlike other congressionally chartered organizations, the Red Cross maintains a special relationship with the federal government. We have the legal status of ‘a federal instrumentality,’ due to our charter requirements to carry out responsibilities delegated to us by the federal government.” Among their responsibilities are “to maintain a system of domestic and international disaster relief, including mandated responsibilities under the National Response Framework coordinated by the Federal Emergency Management Agency (FEMA).” This leads to our first allegation: Red Cross may use their relationship to the federal government to threaten and steal.

Earlier this month, a video from a Texas woman calling herself Gina Nelms appeared on Facebook. In it, she claimed a multitude of Red Cross abuses after Harvey made land-fall, but one stood out. She said that her friend, “Gregory,” who while working with charities like the Cajun Navy was dropping off donations to churches and various places hit by Harvey. She claimed that Red Cross “threatened the pastors, threatened the priests, and threatened the good-hearted, hard-working men and women out here that are trying to help out with the devastation.” She also claimed that Red Cross began “stealing” the donations from drop points, and taking them away in their vehicles.

It’s important to note that Gina isn’t claiming that the law had been violated, but that Red Cross had authorization to do this under an Obama-administration executive order from March 16, 2012 (EO13603 National Defense Resources Preparedness). Certainly, the order exists, but whether it gave Red Cross such powers and whether they claimed power by the EO to do what was alleged is uncertain. This particular EO has been a source of controversy, with some arguing it is a mere update to Clinton-era policy, while others claiming it gave the government greater martialing powers. We tried to reach out to Gina to verify some these details, but she has not yet replied to us.

Before dismissing Gina’s allegation out of hand, it’s important to note that it isn’t isolated; the claim that Red Cross takes the resources of other charities, with threats for non-compliance, has surfaced a few times. For instance, I recently interviewed a man who claimed the same thing was witnessed a few years ago by his niece, formerly with Meals on Wheels and the First Baptist Church in Cross Plains. The area had fell to victim fires in 2005, and many charities (including the Red Cross) were there to help. According to the source, at some point, Red Cross decided to pull-out, and they insisted on taking donations with them, even if they weren’t specifically donated to the Red Cross. Remember, though the disaster had largely passed, there was still great need, and for Red Cross to not only leave earlier than most, but also take the needed resources of some (allegedly by force) out of the area, that conceivably left a lot of people in straits direr than one’s they were already in. If this story pans out, it would show a pattern of behavior for the Red Cross that extends more than 10 years.

Another complaint is that Red Cross has a habit of hording resources. I interviewed a disaster response coordinator for a small non-profit organization who spoke to this issue. This person asked to remain anonymous because of the nature of what they do, but this is a person of some standing who was even present at VOAD meetings with Red Cross, and Texian Partisan is completely satisfied as to their credentials and knowledge. In addition to witnessing that the Red Cross was seldom found in areas he worked at (a complaint that surfaces often), he said that he spoke with a Red Cross volunteer who expressed frustration with the limitations Red Cross was placing on their shelter.  They were rationing towels, diapers, water, baby-wipes etc., despite the size of the family that needed them, and all while having plenty of resources to meet the need. This coordinator commented from what he observed:

I could see truck-loads of water there, and I could see cases of diapers, so it wasn’t a matter that they didn’t have the goods, it was a matter of they didn’t want to give them out.

And although this is certainly not the case at every distribution center, this problem of rationing with little observance of the need present has emerged at some locations. If you check Facebook, some stories to this effect have gone viral.

One other complaint from those working alongside Red Cross is that they charge for services. Personally, I’ve heard more than one story from an old veteran who said when they returned from their war that they avoided Red Cross because of their practice of charging for a meager cup of coffee, whereas other charities gave it away. During Harvey, the allegation that Red Cross was selling water or food has come up now and again. One disaster responder (also anonymous for same reason as above) said that Red Cross had been charging $4 for food, but not to victims… to volunteers. Now, one might say that’s completely different, however, consider this: disaster workers often pick-up and go to the disaster-scene on a moment’s notice to help those in need. Oftentimes the area has no functioning restaurants or means of getting food. Clearly, these disaster-volunteers are needed to stay in place until the mending is complete, not until their own funds run out. Thankfully, other charities like Salvation Army give food for free, including to first responders. Red Cross claims that “All disaster assistance provided from the Red Cross is free of charge,” but the fact that this may not extend to those doing the heavy lifting, many would consider problematic.

Lastly, there’s the allegation that Red Cross throws out or destroys donations. Certainly, it’s understandable if a charity un-encumbers itself of donations that were either useless in a particular situation (like teddy bears donated for kids at Harvey’s ground zero) or damaged so as to make them unsafe or unusable. Lugging such goods around could slow down getting resources to where they are needed. However, this may not completely be the case. Gina, from the fore-mentioned video, claimed that from the donations that Red Cross allegedly appropriated from other charities were separated into items they could sell and those they couldn’t. Those they couldn’t sell were either burned or tossed. And all though the charge of selling goods wasn’t alleged in the following, this same sort of thing was reported recently in Houston. A woman by the name of Wendy Wilkerson Underwood posted a video of her vast stash of brand-new Red Cross blankets (she claimed, though concealed in trash bags) and 500 lbs. of Red Cross donated pet food. She claimed to have rescued  it all from the trash, keeping it for local Houston charities. She also claimed knowledge that the local Red Cross, instead of holding it for Florida or for the need that still existed in Houston, was instructed by the director to “throw it all away, because they could get more.” Underwood added ironically, “Well done, Red Cross!”

This article is by no means the end-all of the stories circulating about the Red Cross. And while our small media outfit can’t absolutely verify these accounts, hopefully we’ve presented enough of the types of complaints present that others with access to authority and resources can look into this with greater thoroughness. This issue needs to be the subject of an official inquiry. Only under the authority of the Texas Attorney General could we determine and correct what (if any) wrong-doing may have occurred, if there is a systemic nature to these activities, and whether or not Red Cross has misrepresented itself to its donors. If proven, this would hopefully lead to the Red Cross’ reform or at least the curtailment of their activities and authority at Texas disaster scenes. However, the worst thing that could happen (for all parties) is for these stories to just hover in the ether, unanswered, allowing either the abuse to continue or forcing Red Cross to operate under a possibly unearned shadow of distrust. It’s time that Ken Paxton’s office opened an investigation to confirm the allegations or absolve Red Cross of wrong or improper actions. If you agree, please sign the TNM petition here.