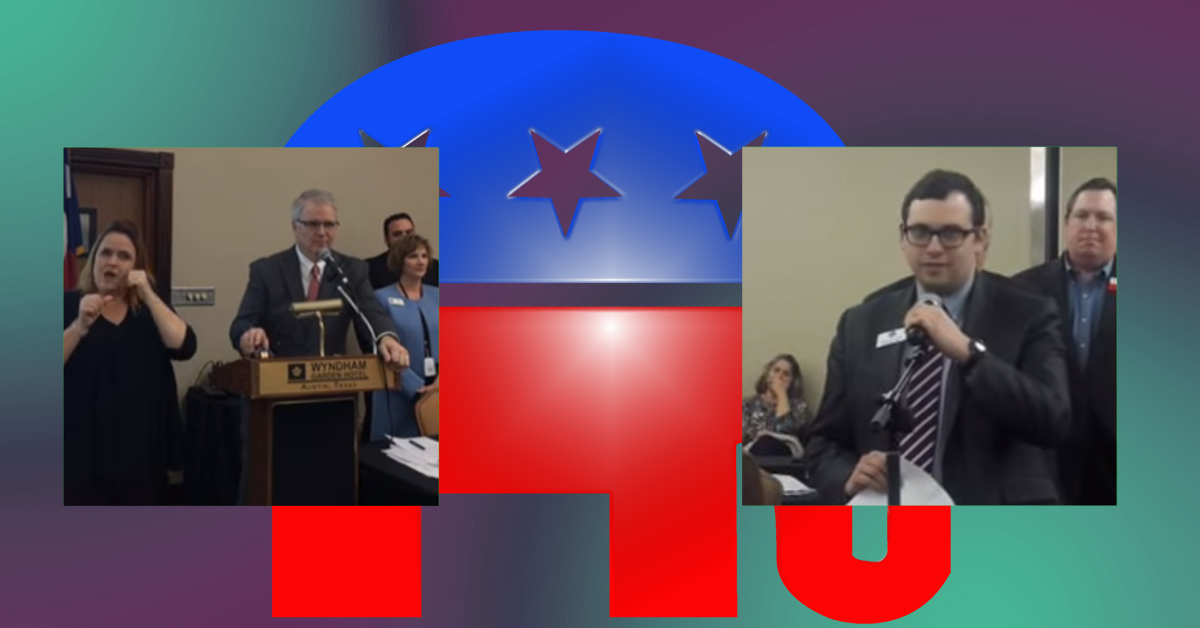 The first quarter meeting of the SREC of Texas was certainly a contentious one. While it had a full agenda, the most anticipated portion was definitely the vote on censuring the current Texas House Speaker Joe Straus (R). Prior to voting, during the portion where members were allowed to voice for or against the resolution, Michael Goldman from SD 21 brought the proceedings down a path that perhaps few expected. He, speaking against the measure, strongly implied that the censure of Straus was motivated by anti-Semitism.

Straus, equally disliked for his obstruction of the GOP agenda and draconian leadership style, had already announced his retirement. This was likely due in no small way to the grass roots forcing him out through a multitude of no-confidence resolutions, but also via an open revolt among Republican colleagues such as Texas District 92 Representative Jonathan Stickland. Even Governor Abbott took Straus to the woodshed for blocking his policy objectives by cutting Joe out of the planning for the special session. This rule 44 censure resolution would be the final step in the Speaker’s rebuke.

Initially, Goldman admitted the problematic status of Straus, saying that “the speaker basically governed as a Democrat.” However, he then went on to suggest that “the censure procedure opens a very difficult precedent.”  Continuing, Goldman said:

I remember a time when this was a less civil debate. I remember back in 2010, when there was an exchange between two members of the SREC at that time about… it was a man named John Cook from SD 2, the other one was Rebecca Williamson. And, John Cook said, ‘I got into politics to elect Christian conservatives to office.’ Everybody knew Joe Straus was Jewish… and I’m Jewish. I’m probably the only person who’s Jewish in this room.

This started to elicit negative responses from the other members, including a remark of “Bulls**t.”

And I heard that. I knew what that meant. I knew it meant I was a stranger in my own state. And then I remember when there was a rally for Scott Turner for speaker. And I like Scott Turner a lot; I worked with him on legislation. And, it was the day before session started in 2015, and a state representative, Jonathan Stickland, got up and he said, “We win when we are courageous Christian conservatives.” And I heard that. And as our politics become more exclusive, we say, “No. We don’t want to grow the party! We want to shrink it.

This sort of accusation was surprising. Doubtless, Texas has bigots like any other state, but there is little evidence to support that they hold significant power or influence, except to those who see racists under every bed. In general, Western societies hold the tenets of racism in abhorrence, and shuns all its adherents; Texas is no exception. Furthermore, Republican activists in Texas (on the SREC or not) tend to be evangelicals, and evangelicals have a reputation for respect for the Jewish people and especially the nation-state of Israel. However, I reached out to SD 19 SREC member Terri Dubose to find out if there was anything to Goldman’s implication of antisemitism on the SREC.

No. Absolutely not. It’s just something that people like Mike Goldman do, to inject identity politics. Basically, they use the tactics of the left when they’re really losing the argument. Because, the only thing that matters here is the grassroots’ voice. They spoke when it came to the censure of Joe Straus.

Additionally, I reached out to both John Cook and Jonathan Stickland, who were directly implicated by Mr. Goldman as using dog-whistles of bigotry. John Cook confirmed that those were his words but says that his comments were merely an appeal to moral leadership in the Texas GOP. He also added that, at that time, the politician he supported for Speaker against Joe Straus was Leo Berman, and Berman was also Jewish. Jonathan Stickland was unfortunately not available for comment.

If you’re like me, your initial response to Michael Goldman’s implication that opposition to Straus is motivated out of hatred for Jews was, “Straus is Jewish? I thought he was just… awful!” I, like many Texans, were merely disappointed with Straus’s behavior as Speaker. After all, what’s the point of a political party controlling the levers of government if they don’t advance that party’s agenda? Far too often, Straus stood as both an impediment to his own party’s platform and a chastiser of all Republicans that would that would dare defy his own vision for the party. If Straus had taken a stand for his party then, he likely wouldn’t be retiring now. Instead, Joe acted like a corrupt aristocrat and made himself a bad stench to all in the GOP who wanted positive change in Texas. Too bad for ol’ Joe, the GOP and Texas House weren’t his own little fiefdoms after all; the grass-roots of his own party taught him that lesson well. And, while cloaking oneself in conspiracy theories of bigotry might be oddly comforting for the accuser, allowing them to indulge the fantasy of “It wasn’t my fault! They’re all just a bunch of racists,” that doesn’t mean such allegations have any basis in reality. Joe Straus was just a horrible Republican, plain and simple. Thinking otherwise is just an attempt to skirt the lesson that public officials are responsible to their constituents.

For the video of January’s SREC meeting, click on the link. Goldman’s comments begin around the four-hour mark.