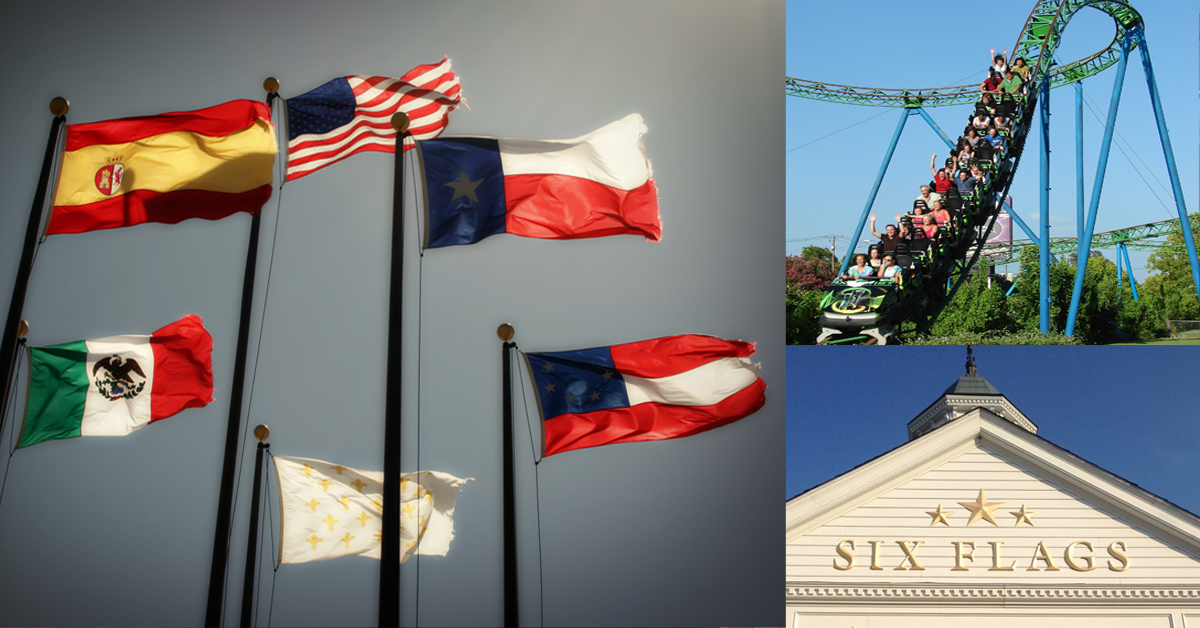 As this past weekend fell, Texans were delivered a bit of a surprise when the amusement-park chain, Six Flags, announced and implemented their plan to remove and replace the flags of their namesake.

For those who don’t know, Six Flags, or Six Flags Over Texas, is an homage to the home where this theme-park originated and the six national flags that have flown over her at one point or another in Texas history. Those flags are of Spain, France, Mexico, the Republic of Texas, the United States, and the Confederacy (the stars and bars, not the battle emblem that is commonly thought of as the Confederate flag). In the place of these flags, six American flags now fly.

It is true that a private business has the right to do as they please in matters like this. Doubtless they wanted to avoid a possible revenue-zapping controversy that might one-day occur in the aftermath of such tragic events like in Charlottesville, where both Neo-Nazis and Anarcho-Communists made a Robert E. Lee statue the catalyst for acting out violently their political/racial grievances, resulting in injuries and even one death. That is understandable. However, such a decision may be premature.

The main objection (not that Six Flags is claiming they are responding to complaints) is centered around the C.S.A. flag, and that current-day decedents of slaves may find that flag as a source of offense or discomfort. Certainly, the horrors of slavery, though generations ago, were many, and it can’t be denied that a part of the southern secession came out of a fear that the new President, Lincoln, would end that repugnant institution. Sensitivity to that concern would, on the surface, seem reasonable. However, before implementing such a proposal, wouldn’t an important first step be to find out from actual African Americans, Texas citizens, what they thought about it instead of just patronizingly assuming their opinion?

Not being Zogby, but nonetheless determined, I took a poll of black Texans among my friends, family, and colleagues, to find out what they personally thought about this decision. First, I had to explain what the six flags meant since it’s such an esoteric fact in a theme-park to most that one wonders how things got to this point. I asked, “Knowing what you know now, as a black Texan, does this move make you more interested in going to Six Flags, less interested, or does it affect your interest at all?” What I found was interesting. Some respondents expressed an interest in not supporting the ideals of the Confederacy/white supremacy, while others said they understood this decision as being purely a business one, but 90% of those surveyed said that the decision would not at all make a difference in their decision to go to a Six Flag theme park. Even 10% said this move made them less likely to attend. And while I make no claims that this is in any way a scientific poll, if this mirrors a more sound sampling, Six Flags may have done this for nothing.

One of the more troubling aspects of this decision is the fact that all non-U.S. flags, not just the Confederate flag, were taken down, presumably for continuity reasons. This includes the Texas Flag. And while the specter of slavery will likely always haunt the emblems of the C.S.A., why must this also extend to our beloved state flag? Are we to have no national pride as Texans either, and instead forever atone for iniquities committed over 150 years ago by people long since turned to dust? Slavery and Jim Crowe have been done away with. Racism is extremely socially prohibitive. When are we going to heal and put the bones of these institutions behind us? When will we understand that there are none without sin, and that all nations have done terrible things, but it is not necessarily those transgressions that should continue to define a nation or it’s symbols? Acknowledging the past is one thing, attempting to cleanse it is completely another.

If Six Flags is determined to continue in their present course, I would like them to consider making a slight alteration: instead of flying six American flags (which will make little sense for their Canadian franchise), fly six Texan flags. By doing so, they’d preemptively deal with any future sensitivity objections and still be true to the park’s Texan roots. That would be a compromise few Texans would object to.