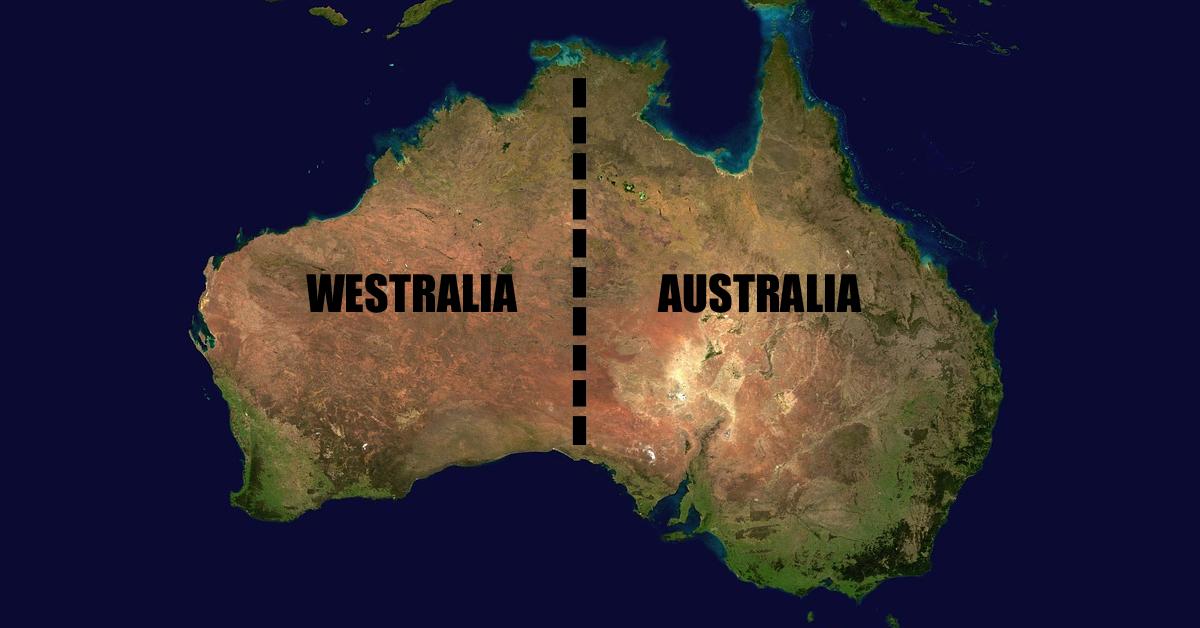 By now, everyone’s heard of Brexit.  Partisan readers also no doubt saw the article on the Catalan independence movement last week. Well, did you know that there are secessionist movements within Australia as well?

Western Australia’s roots in go all the way back to a popular referendum in 1933 to form its own country.  The Commonwealth period had not yet begun, and all of Australia was still under British rule.  Parliament stalled, and eventually the chaos of World War 2 put an end to the effort. Although the 1933 effort ultimately failed, renewed secessionist impulses revived briefly in the 1970’s but never went anywhere. Yet, there remains devotees to the idea, those who diligently work spreading their ideas, ready for the time when they can harness unpopular sentiments for the East and split off into their own nation.

Besides the Westralia movement, there are also movements to change state allegiance within Australia.  For instance, King Island wants to leave the state of Tasmania and join the state of Victoria.

On an even larger scale, North Queensland parliament representative Robert Katter has been stirring the secessionist pot for a familiar reason: lack of representation.  He comes from a region that has a large amount of natural resources, but only two representatives in the Australian parliament.  He sounds like he’s on the same page as many Texans:

Mr Katter conceded more work needed to be done, but said success would mean generating political will. ‘Everything seems impossible until the politics is right,’ he said.

Regarding the possibility of a peaceful Texit, all we lack is the political will.  The grassroots support is there, the political class is still holding us back, but as Katter observed, everything seems impossible until the politics is right.

Australian secession movements face many of the same challenges we do.  “‘There isn’t an obvious way in which a state can legally secede from the whole of Australia,'” Melbourne University constitutional law expert Cheryl Saunders said. However, she added, “‘At the end of the day, a system of Government is supposed to work for the people,'” Continuing, “‘If people have a view about how it might be better configured, it’s incumbent on people to respect that view and talk it through — to see whether it is a good idea or not.'”

Here in Texas, we are still awaiting politicians who openly support and work towards independence directly, but that day is on its way. Who will be Texas’ Robert Katter or Nigel Farage?  Who will be the one who starts the snowball rolling that becomes an avalanche of political will within the legislature? If support for secession continues to grow as it has, sooner or later, the political support will follow.

As exciting as this is, none of it will happen unless Texans do more than just talk. TNM needs your financial support to continue to get the word out about Texas independence, and to support candidates friendly and (some day) openly supportive of our mission to make a Texit happen.  Political will takes political action, and political action takes funding to be taken seriously.  Won’t you help?