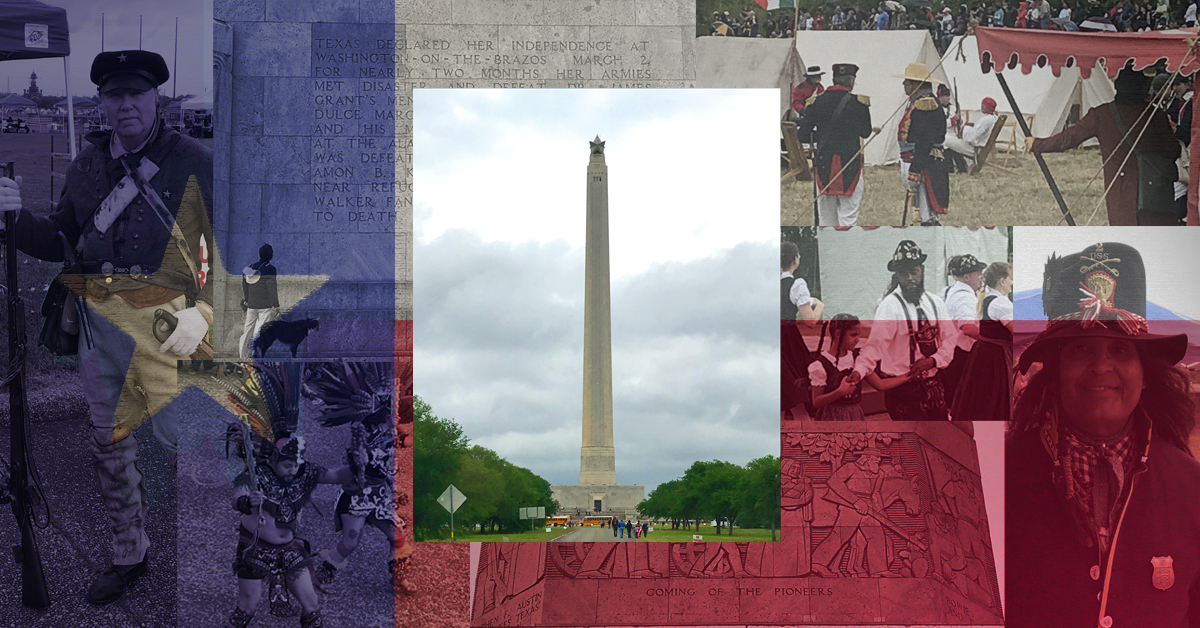 This past weekend, my family decided to observe San Jacinto Day where it all began, at the San Jacinto Battle Monument. 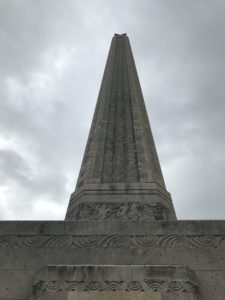 Though rain constantly threatened to overtake the festivities, the weather never became so bad so as to cancel anything. In fact, it was a nice effect to see all those Lone Star Flags flying strongly in the breeze. Certainly, attendance didn’t seem to suffer from the slightly inclement weather, as the grounds were filled with guests from all over the state. 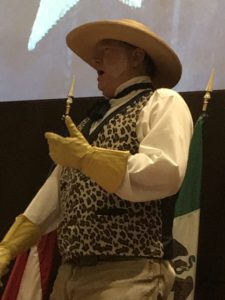 The event was marked by performances of a historic and cultural nature. There was the re-enactment of the battle of San Jacinto, which was very well done! Also, there was an excellent performance at the monument’s theater of an actor portraying Sam Houston recollecting the battle and other events of the life of our first popularly-elected president. Additionally, amid the zydeco music and the booths selling food, souvenirs, and other entertainments, there were dances (of the native, square, and German varieties) and costumed persons telling about events in Texas history, from the camel expedition and the exploits of the Republic’s Navy to native scouts and the buffalo soldiers. Altogether, it was a multifaceted spectacle. 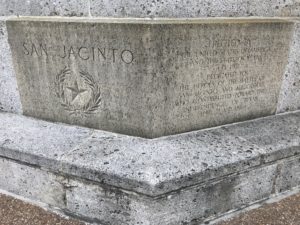 The monument itself was a site to see! Standing tall at 570 feet, almost 15 feet taller than the Washington monument, the structure is covered in inscriptions and engravings that detail the story of the Texas and its secession from the United States of Mexico. Absolutely beautiful! And in another feature that sets it apart from its federal counterpart, if you look closely at the stone quarried to build the massive obelisk, you can still see signs of ancient shellfish long fossilized in Texas soil. This is not a smooth marble structure like the Greek-style temples in the federal capitol. The San Jacinto Monument is a rougher structure with stronger ties to the ancient land of Texas, a fitting tribute to the hardier, rustic, and less genteel people that founded our Republic. 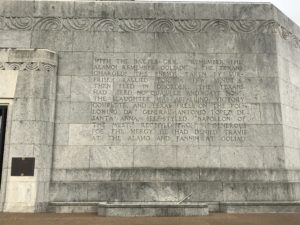 It is important for Texans to mark significant moments in their inimitable history with celebration and reflection. San Jacinto, like Texas Independence Day and the anniversary of the Alamo, is one of those paradigm-shifting moments in world history that we still benefit from today in many ways. It is also part of what makes Texas and Texans unique on this continent, and proudly so. I hope you all found time this weekend to commemorate San Jacinto and in some small way remember who we were… and who we still are!