300 years ago this year, the city of San Antonio had it’s earliest beginings. Since then, the old city has seen its share of significant historical events, so let’s take a few moments and look back at some of the moments and achievements that helped define one of the greatest Texas cities.

High-school history books always focus on the thirteen colonies when describing the early days of North America. However, keep in mind that while 12-year-old Benjamin Franklin was beginning his printing apprenticeship in 1718, San Antonio de Béxar Presidio was already established. 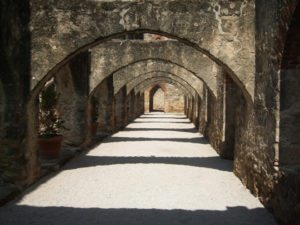 While the Boston Tea Party was brewing in 1773, San Antonio was serving as the capital of Spanish Texas.

Visitors may rush to places like Philadelphia and New York to spy the architecture of by-gone eras, but San Antonio still houses the oldest existing dam and the only existing colonial aqueduct in the country. The Espada Acequia Dam and Aqueduct which were built in 1731 to provide irrigation to farmers around the Mission Espada.

Texas has her own unique and interesting history in San Antonio. The city served first as a religious site for early Spanish Catholic missions then as a military hub for Spain. Mexico continued those traditions during its independence before the Seige of Béxar in December of 1835 and the Battle of the Alamo in March of 1836. After Texas won her freedom, San Antonio was seized twice during the Mexican Invasion of 1842 and the population of the once booming town dwindled to 800 by 1846. 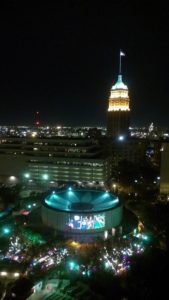 By 1860, San Antonio had grown to become the largest city in Texas with a population of 8,235. The city served as a Confederate Depot during the Civil War, the southern hub of the cattle trail drives in the late 1800’s, and as a wool market for the vast flocks of the Hill Country. The title of biggest Texas city returned to San Antonio for the 1900, 1910 and 1920 censuses, which reflected the influx of immigrants coming to Texas in search of better lives.

Mark Twain once described San Antonio as one of only four unique cities in America. The citizens of Texas heartily agree and are invited to celebrate the 300th birthday of the famed city on May 5, 2018 with a week-long Commemorative Celebration.

While sipping Margaritas on the Riverwalk, take a moment to look around at the history tucked between the tall buildings the line the heart of San Antonio. Imagine what so many people sought under that big sky and remember what they fought for behind the stone walls of the Alamo.