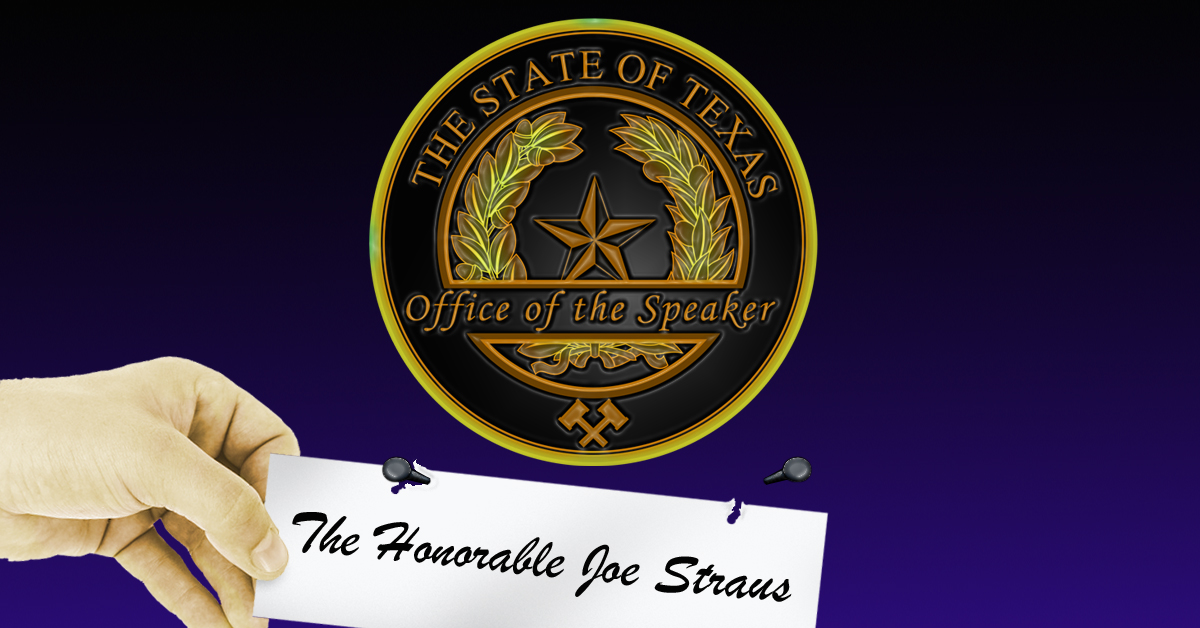 Texans tired of the corrupt and the back-stabbing status quo in Austin and the GOP were recently handed a bit of good news. Over the weekend, the soon to be former House Speaker, Joe Straus, was officially censured by the Republican Party of Texas.

Straus orchestrated his rise to power through support from his opposition in 2009. In supporting Straus, the Democrats didn’t know the bargain they were getting, less a necessary evil and more a coup for their side. Being that he owed his seat to the Democrats (more likely that he was a fellow traveler), Straus governed as at least half-a-Democrat. This was understandably problematic for his own Republican base. Rather than seeing their majority translate into the codification of the GOP platform, it resulted in their agenda’s stifling and the passage of some of the most odious precepts of the other party. Thankfully, due to changes hard fought for in the House Republican Caucus bylaws that now “provide for a process to elect the Speaker internally,” a Republican can no longer rise to the speakership with the help of the opposition. It’s too bad that Texas had to endure almost ten years of Straus obstruction before making this change, but doing these things is always a hard slog, and this is one of many changes in Texas politics that voters who want positive transformation can be encouraged by.

In addition to the revolt of the GOP caucus against Straus, RPT committees and the normal rank and file of the Texas GOP had their own belly-full of the benighted speaker, organizing resolutions of no-confidence in his leadership, occurring in dozens of counties throughout the state. This effort led to such an attempt on Straus’ home turf of Bexar County. Though irregularly nudged-out by the local party boss, it led to Straus seeing the writing on the wall and announcing his retirement. This was followed by last month’s successful resolution from Bexar, culminating this past weekend in a 43 to 19 two thirds majority vote passing the Rule 44 resolution of censure form the Republican Party of Texas. Straus had finally received the official rebuke of the statewide party.

While the censure doesn’t preclude old Joe from trying for another office later (to which he’s hinted at), it does make it very difficult. I mean, unless you go full Democrat, it’s a bit hard to win a primary when you’d been cast out by your own party! Of course, Straus could’ve avoided all of this by simply standing by his party, or at least have the guts to stand by his principles and become a Democrat, the party that seems to better encapsulates his world-view. However, speculating as to why he didn’t isn’t too difficult: Joe wanted power, and in Texas you must at least be a Republican in name. He thought he could toss the occasional GOP favored legislation to the mob, killing the rest of it, and run the House like Caesar; for a time, he was successful. Straus believed the Texas voter too stupid to really notice what he was really doing. He thought he had the world on a string, but he really had a tiger by the tail, and it was only a matter of time before the tiger got him.

Now, as Joe is seemingly retiring from public life in Texas, perhaps hanging in his den his own copy of the Dallas Morning News that named Straus Texan of the Year (the opposition always loves the other side’s heretics), perhaps he thinks it was all worth it. And while newspapers and the left of center will fondly remember him (even Nixon and Bill Clinton still have their devotees), the rest of us will remember him differently, as a snake-oil salesman who wormed his way into power only to actively work against the party and people, another condescending patrón who flatters himself he makes better decisions for the little people than they can for themselves. And while his censure may be little more than the door smacking him on the way out, many hope that it will serve as cautionary tale to future politicians, especially Republicans, who would stand in the way of the will of the people of Texas.