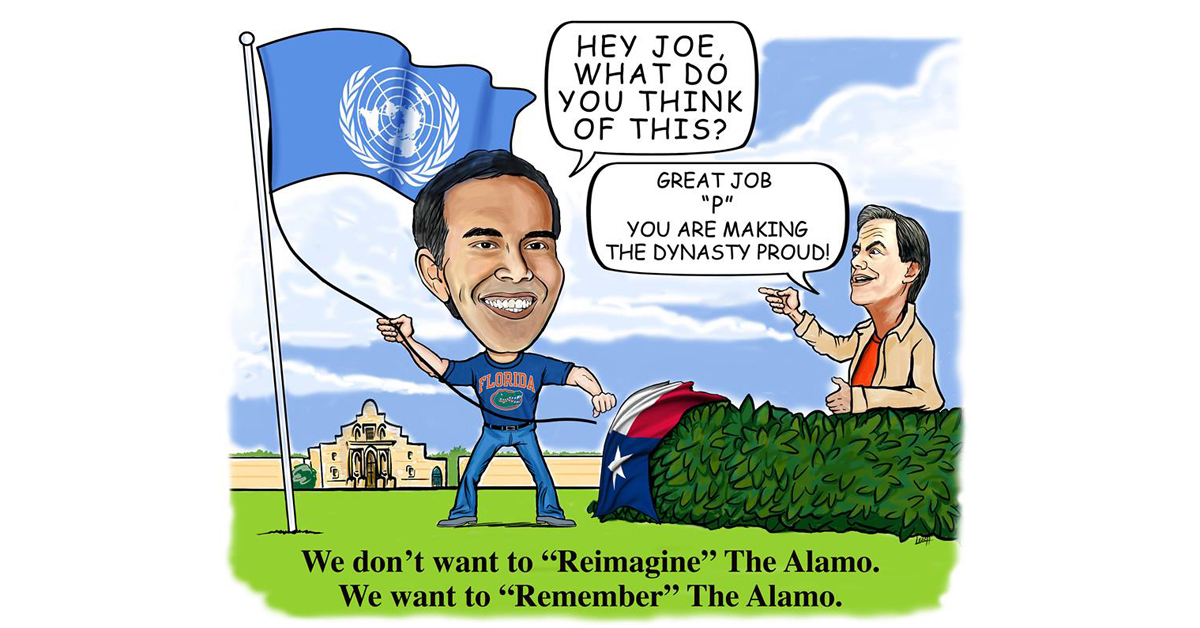 Soon, “Remember the Alamo” will have a completely new meaning to patriotic Texans, that is if George P. Bush and his allies, like Speaker Joe Straus, have their way. Indeed, all we will have left of the Alamo as a shrine of Texas Independence will be a mere memory.

The Texian Partisan has written previously about the ill-conceived plans of Texas Land Commissioner George P. Bush to “reimagine the Alamo” and otherwise remove all the historical significance of the site for Texans. Instead of presenting the Alamo as the site of the massacre where William B. Travis, James Bowie, Davy Crockett, and countless others committed their lives to the cause of Texas, the “re-imagined Alamo” would be just a multi-cultural hodgepodge of world history.

Thankfully, here at the eleventh hour before the cranes remove the Cenotaph (which has stood before the Alamo since the 1836 Centennial), there is a glimmer of hope. Recently, the Texas State Republican Executive Committee voted 57-1 to focus on the Battle of the Alamo (February 23-March 6, 1836) while “re-imagining” the site.

The resolution was clear:

“Whereas there are forces at work to remake or ‘re-imagine’ the history of the Alamo and diminish its inspiring message while the property around it undergoes renovation to increase profit from tourism… be it resolved that decision-making authorities shall affirm and emphasize the intrinsic significance of the 1836 battle in telling the story of the Alamo.”

“that Texas’ authority regarding the Alamo shall not be infringed by any organization or authority, including but not limited to local governments, the federal government, the United Nations, or UNESCO.”

This strong language stands in contrast to the disturbingly un-Texan perspective that seems to pervade the re-imagining efforts. For instance, Jerry Patterson (Bush’s predecessor as Land Commissioner) once asked Alamo chief planner George Skarmeas , “Why not restore the Alamo to its 1836 appearance?”

If we are to be optimistic, we might hope that mainstream Texans are finally waking up to the goal to marginalize the Alamo and the Texas War for Independence. This would not be the first time since taking office that George P. Bush has found himself in hot water with state leadership. In fact, it was just over a year ago that the Governor’s Office expressed its dissatisfaction with Bush over a abysmal settlement with the Daughters of the Republic of Texas.

Jeremy Blosser, a Committee member from Senate District 10 characterized the issue well:  “the Alamo’s been more than the battle, but the battle has to be front and center and we have to remember the Alamo.”