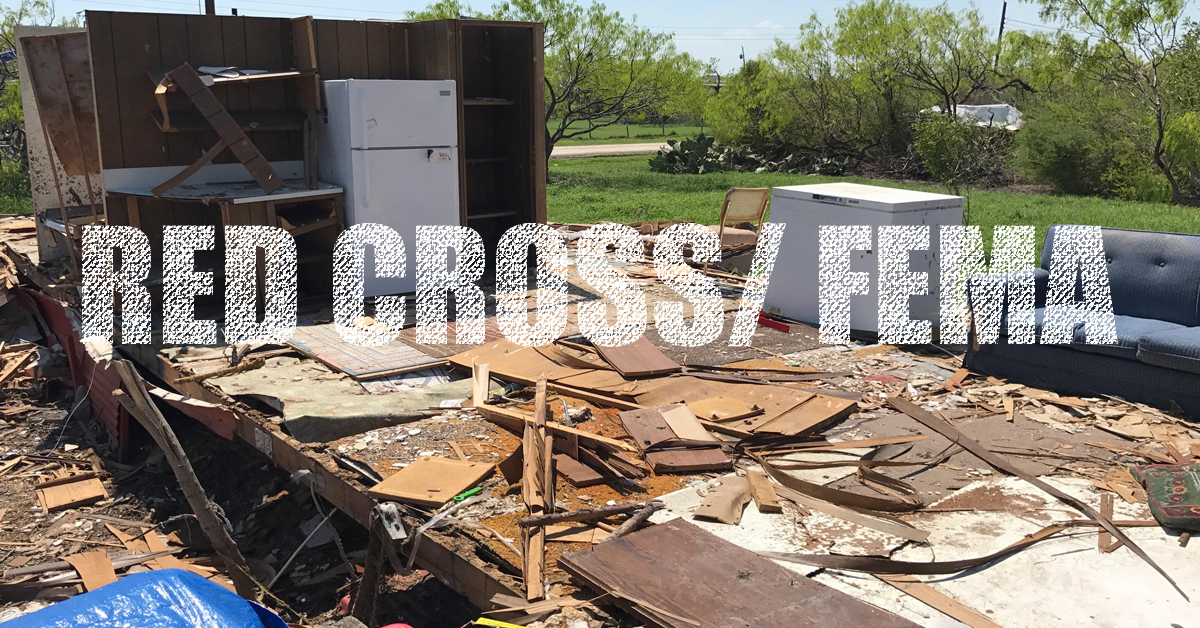 Recently, NBC News put out a story on the American Red Cross and their failure to fulfill promises to hurricane-hit Texans. Often under-represented or absent from damaged areas, the modest relief they offer in the Immediate Assistance Program is often tied up in bureaucratic red-tape, showing them to be an unsafe bet for the billions of donated dollars they received for the Harvey relief effort. But it doesn’t stop there…

The flood of accounts has been overwhelming. Allegations that the Red Cross is hoarding supplies, diverting or confiscating emergency assets, or acting in a generally incompetent manner have been streaming in. In the next series of articles, we will focus on some of these stories on ineptness of Red Cross and FEMA. Understand, that what we exhibit is only a small sample of what’s available, and their volume alone should demand an official investigation.

Our first story comes from someone we are calling Rebecca. She requested the use of a pseudonym because she cooperated with agencies like the Red Cross, and may yet again in the future. However, she is willing to speak with state or federal investigators, if requested. Rebecca has provided us with proof of her identity and that such conversations took place. The Texian Partisan is satisfied that she accurately represented the facts. 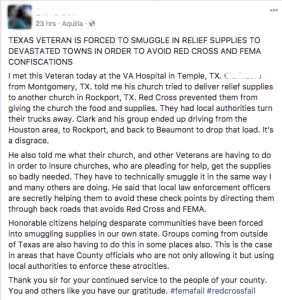 August 31st, four days after Harvey made landfall, through local government staffers, Rebecca learned, at approximately 8 or 9 in the morning, that the Beaumont/Galveston areas were without running water and desperately needed an emergency water delivery. Rebecca’s team only had three-and-a-half water pallets at their disposal. Rebecca’s team arranged with a local congressman’s staff to collect the pallets from her location in Katy. En route, they were turned around by (allegedly) law-enforcement, and therefore never reached the depot. There is no clear reason known why this happened.

Additionally, Rebecca was working with another organization to reroute to Galveston a water trailer inbound from Florida. She says, that according to the head of that organization, that particular truck was confiscated. This kind of report comes up repeatedly. For instance, another convoy team leader delivering supplies to Houston came forward about this sort of thing. He delivered a truckload of supplies to a warehouse, protected by Oath Keepers. He was then told that the Red Cross was taking control of his shipment and that warehouse, which was already stocked with thousands of tons of supplies, just sitting there for weeks. “They were single level high but there must have been, I’d say, 200 pallets of supplies shrink wrap sitting in that warehouse.” The team leader continued, “I did ask him when he confirmed the Red Cross was taking it over; [I] asked him under what authority does the Red Cross come in and take over a warehouse full of supplies that private citizens put together as donations, and his single word response was ‘FEMA.’ He didn’t really elaborate beyond that, so I’m under the impression that FEMA has the authority to deputize the Red Cross, to walk into a warehouse full of assets and say, ‘These are mine.’” 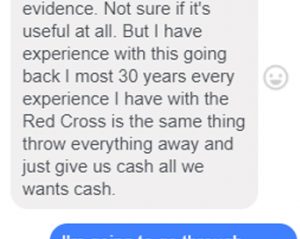 When Rebecca realized that she was denied both water supplies, she reached out to Trusted World, the only official collection facility for the American Red Cross in Dallas, accounting for approximately 20,000-40,000 sq. ft. of shelter supply inventory (water, clothing, etc.). She contacted the management multiple times requesting that they release their water supply to the relief of Beaumont and Galveston. However, despite the repeated requests from multiple local politicians in the affected areas, Trusted World refused to comply without a directive from the director of the Dallas Red Cross authorizing them to release any inventory. Finally, Rebecca was then given the contact information for a woman named Sandra.

Rebecca then immediately messaged Sandra at 11:30 a.m., informing her of the need and the officials that were requesting Red Cross “expedited serves.” Sandra’s initial reply came half an hour later and informed that she would pass on Rebecca’s request to their contact in Houston. After waiting four hours with no contact from Houston Red Cross, Rebecca contacted the local Beaumont and Galveston officials and ascertained that there was no response from Houston Red Cross to meet the dire need. Messages and calls were going unanswered, even though American Red Cross was informed that the urgency had increased with Dickinson also without running water. “So far, these areas had gone approximately 12 hours without running water, which was devastating for the hospitals and emergency care facilities,” said Rebecca.

Four hours later, Rebecca had still not heard from the Houston Red Cross contact and reached out to Sandra again, who then replied that Dallas Red Cross did not have the ability to transport any shelter items so all inventory would have to be supplied by their Houston counterparts. In response, Rebecca then informed Sandra that the National Guards were able to procure her a C-130 Hercules to pick-up the water supply from any nearby Dallas airfield to airdrop into the affected areas and that she would personally rent trailers to collect the water from Trusted World’s warehouses to deliver to the airfield to resolve Red Cross’ objections. At this point, Sandra stopped responding to Rebecca’s messages and waited another half an hour before sharing the email address for her contact at Houston Red Cross. According to Rebecca, Sandra never did address releasing the Dallas water supply, even though Rebecca had resolved all transportation issues for them. Rebecca explained:

Essentially, this was about five-and-a-half, maybe six hours of back-and-forth with this Sandra lady here at the Red Cross in Dallas, with no actual movement. It basically seemed like they were not very willing to step forward.

I’m sure when pressed for an answer, American Red Cross might have some explanation for these events (if they don’t deny them), however, it’s hard to imagine what the explanation might be. From where this writer is sitting, it seems that either the Red Cross was unwilling to help or their bureaucratic structure was so inept that they couldn’t help.

Again, this is just another reason why ARC should be investigated. If you agree, please sign the petition here.