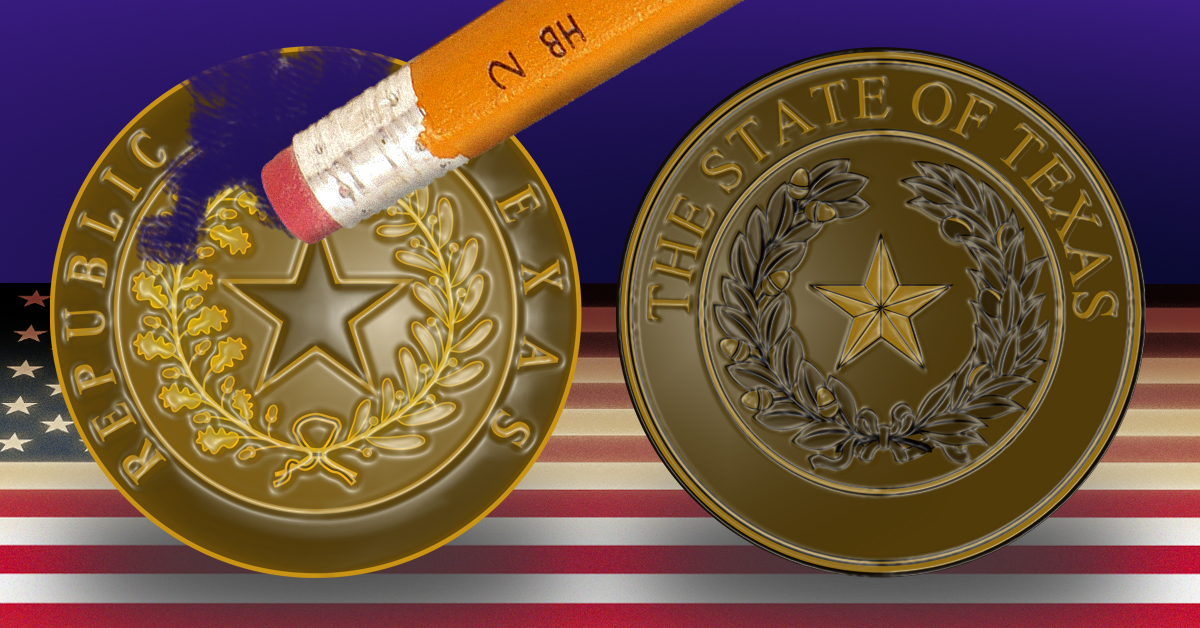 There has long been a trend, especially post Civil War, to re-imagine the War for Texas Independence as a proxy conflict between Washington D.C. and dictatorial rule south of the border. The narrative goes along the lines that Texans were just Americans who expanded into western territories, and politics prevented the United States from acquiring the territory for a short time. Indeed, the San Jacinto Monument (paid for by the federal government) ends with:

Measured by its results, San Jacinto was one of the decisive battles of the world. The freedom of Texas from Mexico won here led to annexation and to the Mexican–American War, resulting in the acquisition by the United States of the states of Texas, New Mexico, Arizona, Nevada, California, Utah and parts of Colorado, Wyoming, Kansas and Oklahoma. Almost one-third of the present area of the American Nation, nearly a million square miles of territory, changed sovereignty.

Its hard to read that and still remember that the Republic of Texas won its own freedom with no help at all from the government of the United States. But the Republic of Texas was not just another state. It was a nation, with its own constitution, its own army and navy, and its own currency. The evidence has not been totally erased: the international boundary markers can still be seen which prove that Texas was once a sovereign nation. For nine years, the Republic of Texas was an independent republic that successfully defended itself from nearly constant barrages from Mexico and had embassies in London and Paris.

Is it fair, then, for American historians to absorb the proud history of a nation named Texas into the history of the United States?

At least one Wikipedia article refers to Texian soldiers in the Texas revolution as “Texas-American forces.” Though Wikipedia is predictably inconsistent and does seem to overtly minimize the significance of the Texas Revolution and early Texas history, there are other subtle observations that might be made that the sacrifice of Texans for Texas has been subverted by those who would proclaim their achievements to be made under the banner of the United States.

Consider Goliad and the Alamo. Weeds flourish in the cracks of the Fannin Memorial Monument, while the flag of the United States flies over those who were massacred in their fight to make Texas a sovereign entity. Why also is the Alamo and our proud history in danger of being sold down the river to the federal government and the United Nations? Sadly, most Texans aren’t paying attention (Click on link for more info).

We must change this trend. Texans died for the Lone Star, and we are obligated to honor that sacrifice.

This tactic of obscuring a sovereign nation’s history with that of another is sadly a common practice. In fact, a journey to the United Kingdom will quickly teach travelers that Scotland is nothing but a province of England. Indeed, just a short time after the union of the crowns and the Jacobite rebellions, the history of this proud nation was on the verge of being completely obscured by the English. The Scottish crown jewels were nearly forgotten until they were re-discovered in 1818.

Could the same happen to Texas? Likely not.

One nearly universal characteristic of Texans is that they tell everyone about their nationhood and remind total strangers that they will soon be one again. So unlike Scotland, its not very plausible that anyone…anywhere…will soon forget. Also thankfully, the seal on the floor or the statehouse reminds us that we are, and ever will be, the Republic of Texas.

But the scope of what Texas means to future Texans is up to us. Will future Texans stand when Texas, Our Texas is played at Ranger’s Stadium? Will mothers grieve when the Lone Star is draped over fallen heroes? Will our sons and daughters have the opportunity to serve at our re-opened embassies in London, Paris, and even Washington D.C.?

That’s up to Texans. It’s up to us to ensure that if there’s one flag flown over local and state buildings, that its the flag of Texas. Its up to us to invite our friends over to launch fireworks on March 2, and its up to us to teach the unschooled masses about the history and unique culture of Texas. Let us always remember our heroes and let us embrace our own legends. Let us never relinquish our natural patriotism of the land and the people we love.