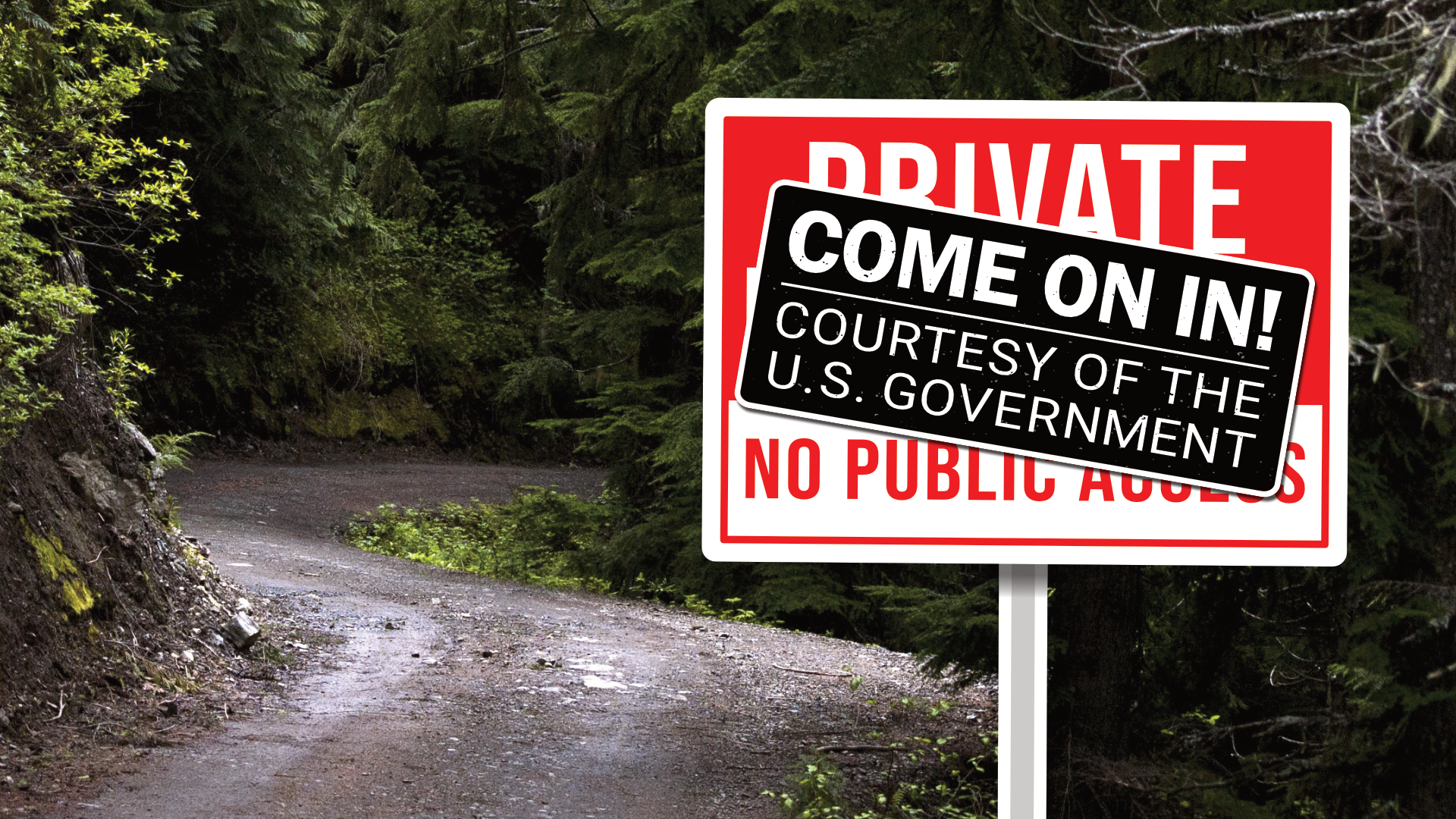 They say “a man is only as good as his word,” but the Federal government doesn’t seem to know that one.  A Montana man has taken to the courts to hold the US Forest Service to their word.

Imagine this: you save up your money and purchase your dream home.  You’ve got a view of the mountains, enough acreage for privacy, and life is wonderful.  This was the situation that Montana resident Wil Wilkins made for himself.  He bought his property, just over nine acres adjacent to the Bitterroot National Forest, in 2004. When he bought the property, surrounded by pine trees and with plentiful birds and wildlife, it corresponded to a vision he’d had his entire life.

When he purchased his property, there was an easement road for the US Forest Service to access a portion of the national forest.  The easement agreement permitted the Forest Service to build and maintain an unpaved access road through private property, now owned by Wilkins and his few neighbors along the road, into the national forest, primarily for purposes of timber harvesting and general maintenance. The agreement also specified that the road was not for “public use,” and was for Forest Service employees and permitees only.

If you give an inch, they’ll take a mile

It wasn’t long after Wilkins’ purchase when the Forest Service posted signs encouraging the general public to take the road to access the forest.  Traffic and parking increased dramatically, as did trespassing and theft.  Wilkins’ quiet homestead was made much more “public” by the expansion of the road’s use by the Forest Service.

Like many traditionalists, Wilkins first instinct wasn’t to sue, but to sit down and have a talk.  Unfortunately, discussions with the Forest Service to get the agency to honor its agreement were fruitless. Wilkins hasn’t forgotten the response from a district ranger: “He crossed his arms, leaned back in his chair, looked at me and he started laughing,” Wilkins recalls. “He said, ‘Wil, you can always sue us.’ And that’s when I said to myself, ‘OK then, I will.’”

Now Wilkins’ case has made it all the way to the US Supreme Court.  While the case on its merits seems pretty straightforward, the Federal Government with its army of lawyers has ways of shady dealing when it comes to legal interpretation.  In this case, the Federal Government says that the complaint from Wilkins was not filed timely, and so the court has no standing to hear the case.  Rather than take on the actual issues of merit, the Federal position is that Wilkins somehow has no right at all to hold them to their word because he didn’t file the complaint soon enough.

Time will tell how this case plays out for Wil Wilkins.  Will the court uphold his right to make the Forest Service honor a written contract, or will the court take the more common governmental approach of self-preservation of government interests?

As a Texas nationalist, why is this story worth reporting or considering?  Because it parallels our quest for a free and independent Texas.  Let me frame the story this way.  Imagine that you’ve cast your lot in favor of property in Texas.  That property comes with a set of written requirements, clear expectations of the rights of the property owner and the rights and expectations of the government: the US and Texas constitutions.  Under those rules as intended, everyone has an opportunity to thrive and have a great life.  Instead, the Federal Government has taken its “easement” and expanded its role far beyond the terms of the contract.  Where in the Constitution is socialism, forced acceptance of gender transition, rules about climate change, the expanded surveillance state, or even the ability to shut down the entire economy via “recommendations” from a government agency in the face of a virus?

At the same time, within the Constitution are guarantees of rights that are also neglected.  The Federal government retains the responsibility for immigration, but can’t manage to make any meaningful progress, for example.  They promise “life, liberty, and the pursuit of happiness,” and yet they chip away at every semblance of fiscal responsibility by excessive taxation and excessive deficit spending.  They routinely mortgage your future and mine, without our consent.

When as a Texan we try to sit down and have a talk on the merits of these issues, when we try to solve the problems of government overreach, we are told we don’t have the standing to even have the discussion.  When Texas works to secure the border, for example, we’re reminded that the US claims responsibility for that task, and our lawyer governor does little but send “strongly worded letters.”  When we point out the overt Biden agenda to kill Texas oil and natural gas economy, we’re told that it’s “for the greater good” and nothing ever changes in our favor.

There is no “Supreme Court” who will decide Texas’ case against the Federal Government, but that’s OK, because the Texas constitution itself guarantees that “all political power is inherent in the people.”  Wil Wilkins may have some recourse through the courts, or he may not.  Texas on the other hand has the solution right in front of us: a Texit referendum.  To “take matters into our own hands” is not to provoke violence or even civil disobedience.  All we have to do is vote.