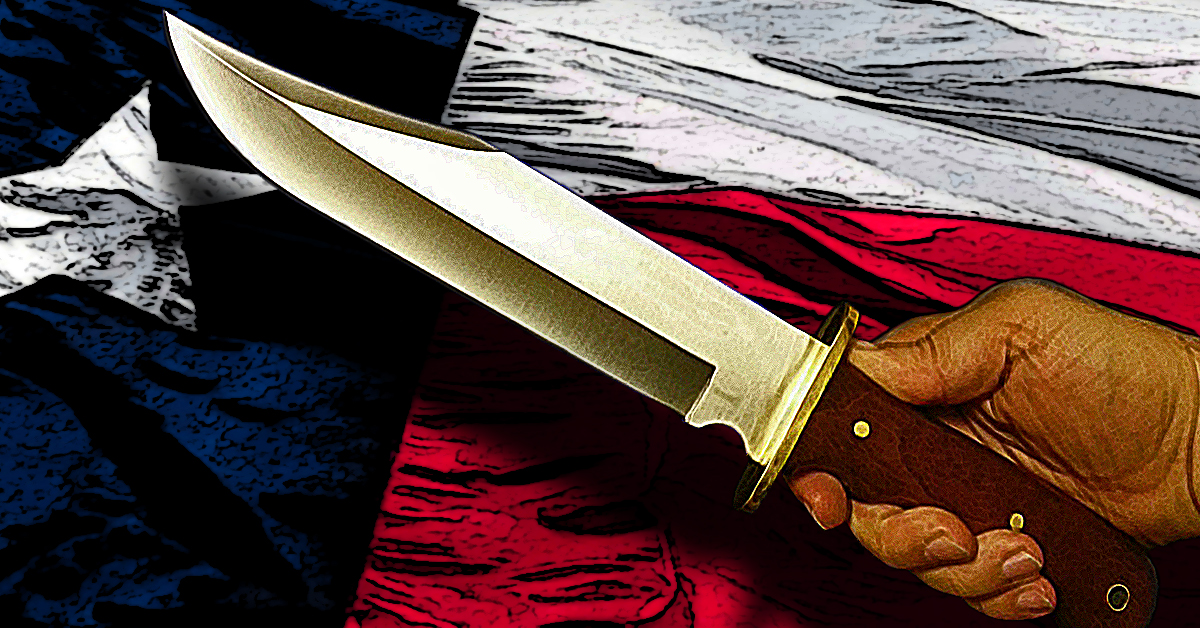 Good news! Governor Abbott, on 6/15/17, signed into law a bill that the Texas legislature passed back in May, removing the designation of certain knives as “illegal.” This new law, effective September first, will make it legal to carry previously banned knives.  Prior to this change,  knives over 5.5”, throwing knives, dirks, daggers, poniards, Bowie knives, swords, and spears were illegal to possess in public.

Since 2010 through the efforts of the national advocacy organization Knife Rights, 12 states have passed laws lessening or eliminating knife restrictions.  Texas passed statewide “knife law preemption” in 2015, with the result that no city or county may have knife laws that are more restrictive than the state laws.  Previously San Antonio and Corpus Christi were among those Texas cities enhancing knife-restrictions.  Also in 2013, the Texas prohibition on automatic opening knives was removed.  Since that time, automatic opening knives have been legal to carry.

The passage of this bill was a welcome announcement to the Texas Nationalist Movement, for it has long been a legislative priority, going back to 2015.  To TNM it didn’t make a lick of sense that, in the nation that was formed from the blood of heroes such as James Bowie, it was illegal to carry the knife that bears his name.  The Texas House resolved earlier this year to make the Bowie knife the “state knife” of Texas, and so it’s only fitting that we can now carry such a knife in honor of those who did so before us.

The battle to pass HB 1935 was a long and difficult one.  It was initially passed out of committee the day before the UT stabbing. The timing made progressing the bill more difficult, but the criminal justice committee hearing it passed the bill unanimously, and was referred to local and uncontested calendar. While the initial bill was presented with no other stipulations other than removing “illegal knife” language, concessions were required to move the bill through the legislative process after the UT stabbing.

HB 1935 maintains a restriction that knives over 5.5” in blade length may not be carried in prohibited places: schools, polling places, secure areas of airports, racetracks, 51% establishments, sporting events, correctional facilities, hospitals, nursing homes, mental hospitals, amusement parks, or churches.  Prohibitions continue for transferring knives over 5.5” to persons under age 18 without written parental consent, and the carry of such knives by persons under 18 who are not under direct guardian supervision.  HB 1935 does not supersede federal TSA regulations regarding knives.

According to Lone Star Gun Rights lobbyist A.J. Postell, the bill had strong bipartisan support.  The Republicans supported the bill because they tend to support second amendment issues.  The Democrats supported the bill because under the previous law, simple possession of a knife could be a crime, even if no actual crime was committed and the knife was legal to own.  Removing these victimless offenses from the law books serves their interests of criminal justice reform.

While TNM’s number one legislative priority is securing a binding independence referendum, in keeping with our understanding of second amendment rights, we rejoice at the bills’ passing.  The right to “bear arms” need not be limited to guns.  HB 1935 represents the greatest advance in Texas’ second amendment rights since concealed carry of firearms was authorized in 1995.  While the TNM-endorsed constitutional carry bills were ultimately not passed, HB 1935 is a still a major victory for freedom, for the second amendment, and ultimately for Texans.